Eugene Melnyk’s first attempt at clearing the air with Ottawa Senators fans had some rocky moments on Tuesday night.

Melnyk and Ottawa general manager Pierre Dorion met with fans in the first of three town hall meetings, an unprecedented move by the long-time Senators owner. It was the first time Melnyk has done such events since taking ownership of the team back in 2003.

Melnyk’s relationship with fans has been tumultuous over the years, but things took a dramatic turn for the worse this season. He raised the ire of Sens supporters in December, on the eve of the franchise’s first outdoor game, when he said he would consider relocating the team if the financial picture didn’t improve.

“If it becomes a disaster? Yes. If you start not seeing crowds showing up, yes. For now, we are on the cusp of doing okay,” said Melnyk in December.

Melnyk was asked about his comments Tuesday night and admitted he made an “ill-fated response” and blamed the media for how things turned out.

“What was reflected in the press wasn’t what I said.”

“If it makes everybody feel better, I do apologize for the mischaracterization.”

Fans were pleased with some of what Melnyk had to say on Tuesday night, such as lowering parking rates, concession incentives and the removal of the tarped seats in the upper bowl, but many weren’t impressed with the apology.

“I’ve been a season-ticket holder since day one, but I was on the fence for the first time this year,” said Mike Milobar. “The breaking point was the comments he made in December. That wasn’t an apology tonight.”

Milobar, who was in attendance with his son, Curtis, also took exception when both Melnyk and Dorion insinuated that long-time Senators captain Daniel Alfredsson wanted to leave the team and go to Detroit in 2013 when he was an unrestricted free agent.

Those comments earned the duo a round of boos from many of the 300 on hand at Canadian Tire Centre.

“That was brutal,” said Curtis Milobar.

As expected, current captain Erik Karlsson’s future with the team was a hot topic for many fans. Dorion said they would be offering a contract extension, likely of eight years, to Karlsson July 1, when the two sides can start negotiations, and went so far as making a commitment not to trade the defenceman at the NHL Draft.

“At the end of the day it will be his choice,” said Dorion. “If we offer him a fair contract and he doesn’t want to sign here, then we will have to look at other options. The ball will be in his court.”

Like Melnyk, Dorion also blamed the media for how things spiralled earlier this year with reports of Karlsson being traded.

“We never actively shopped Erik, but we have to listen,” said Dorion. “So many lies and nonsense. No accountability about what is written.”

However, Melnyk did express caution at their ability to come to terms on a new contract with Karlsson.

“There are teams that can out gun us 5-to-1 when it comes to signing Karlsson. You can only go as far as you can go and we’ll go as far as we can,” he said.

Fans hoping for a quick turnaround after a disappointing season that saw the team finish 30th overall with a 28-43-11 record might have been dismayed to hear Melnyk’s projection for next season.

“We’re not going to win the Stanley Cup next year,” said Melnyk. “Three to five years, that’s the objective.”

The Senators owner was asked point blank under what circumstance he would sell the team and once again Melnyk was adamant in his response.

Karlsson hopes to see another season with the Senators 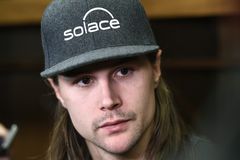