Ottawa Senators general manager Pierre Dorion has officially declared the rebuild over in the nation’s capital. Now the question remains whether or not the pieces he put in place are ready to take the next step.

The one move Dorion hasn’t been able to make is signing Brady Tkachuk to a contract extension. The two sides haven’t been able to come to an agreement and at this point even if Tkachuk did resign he wouldn’t be ready for opening night on Thursday.

There are still reasons for optimism on this year’s Senators team even without Tkachuk, but it’s unlikely they are playoff bound just yet.

While Ottawa’s top six should be consistent, the bottom six and defence could be cause for concern.

Thomas Chabot and Artem Zub have established themselves as Ottawa’s top defence tandem and it appears Nick Holden and Nikita Zaitsev will form the second pairing. Just who will round out the top six is still up for debate.

“We’ve got some tough decisions,” said Smith. “It’s not an easy decision, but we’re going to make it and if it doesn’t work out we’re not afraid to change and change again until we find and figure it out.”

Tim Stutzle appears to be on the top line in Tkachuk’s absence. The Senators will be looking for a big year from the sophomore who impressed in his first season. Josh Norris has established himself as the No. 1 centre with Drake Batherson, newly signed to a six-year contract, on the right.

The proposed second line could be the one to watch. Throughout camp Smith has talked about wanting to create an “identity line”, which would feature Nick Paul, Shane Pinto and Connor Brown.

The question coming into camp was whether or not Pinto, 20, was ready to handle the responsibilities of playing in the NHL, but he put those questions to rest and earned the No. 2 centre position.

While there will likely be some growing pains, putting him between the team’s two most responsible forwards will likely help. Brown said he’s been impressed by the young centre’s maturity.

“It’s rare to see a young guy like that so responsible out of college,” said Brown. “He knows how to play a 200-foot game. He’s not cheating for offence. He’s taking care of little things and winning his battles. He’s doing a lot of things you see older, veteran guys do.”

Injuries have made the bottom six something of a challenge as Colin White suffered a dislocated shoulder that will keep him sidelined for several months. Add in injuries to Austin Watson and Clark Bishop, and suddenly Smith has some more decisions to make.

Parker Kelly was signed to a two-year contract extension Tuesday. His hard work has earned Smith’s respect and he could find himself on the left side of the fourth line. Tyler Ennis may have benefited most from Tkachuk’s absence as he was invited to camp on a professional tryout and earned a one-year contract.

Matt Murray will be the number-one goalie with Anton Forsberg as his backup. Last season the Senators got off to an ugly 2-12-1 record, due in part to a lack of stability in goal.

Smith, however, seems confident in his duo.

“Our goaltending has been spectacular throughout the exhibition and given us every opportunity every night to win,” he said.

The Senators will need solid goaltending if they hope to keep pace in the competitive Atlantic Division.

Ottawa plans to announce its leadership group Thursday, but it’s unlikely a captain will be named at that time. Allen ready to step up for Canadiens with star goaltender Price out to start season
Subscriber content
October 13, 2021 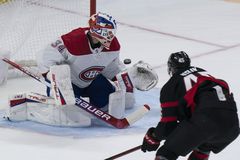 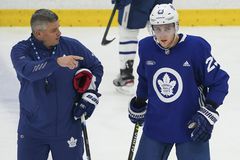