The Vegas Golden Knights have earned a bit of a cushion in the standings with another strong road performance.

Shea Theodore scored the overtime winner as the Golden Knights maintained their hold on first place in the Pacific Division, defeating the second-place Edmonton Oilers 3-2 on Monday — following a hard-fought 5-3 victory over the Flames in Calgary the previous night.

Theodore picked the top corner 2:13 into OT on a feed from Jonathan Marchessault, who scored the tying goal.

“It was a gutsy effort, three in four nights, playing last night and then back-to-back,” said Vegas head coach Pete DeBoer. “I thought our guys showed up and really did a good job, every guy out there that dressed, goalie on out.

“It was a big win for us, especially a big team win.”

Nicolas Roy also scored for the Golden Knights (39-24-8), who have gone 11-2-0 in their past 13 games and are now three points up on Edmonton for the division lead.

“It’s huge, we’re getting down to crunch time here and everyone is jockeying for positions and playoffs and the standings,” said Golden Knights defenceman Alec Martinez. “We knew this was going to be a big trip for us, and obviously we weren’t too happy with the start of it, but between last night and tonight we’re happy to get the win.”

Alex Chiasson and Ryan Nugent-Hopkins responded for the Oilers (37-24-9), who were playing without captain Connor McDavid, missing the game due to an illness.

“We are just playing a real disconnected game,” said Oilers head coach Dave Tippett. “We are just not playing very well as a group right now. I thought we had addressed some things this morning, but our execution is so poor in a lot of different situations.

Edmonton got the scoring started nine minutes into the first period as Chiasson tipped an Oscar Klefbom shot past Knights goalie Marc-Andre Fleury for his 11th of the season and his third goal in the last four games.

Vegas drew even with a power-play goal with three minutes remaining in the opening frame as a Nate Schmidt point blast was deflected by Roy before it clipped off of Koskinen’s glove and in.

The Golden Knights outshot the Oilers 15-3 in the first period.

There was no scoring in the second period — the best chance being a crossbar hit by Vegas forward Nick Cousins — with the shots sitting at 30-14 after 40 minutes.

The Oilers regained the lead seven minutes into the third as Kailer Yamamoto battled hard to send the puck in front to allow Nugent-Hopkins to score his 22nd.

Marchessault tied the game with eight minutes left in the third, lofting home his 22nd and first even-strength goal in 18 games.

The Oilers continue their homestand with a game against the Winnipeg Jets on Wednesday, while the Golden Knights play the fourth game of a five-game trip in Minnesota on Thursday.

NOTES: It was the third of four meetings between the two teams this season. They split the first two games, both played in Vegas. Their final matchup goes on March 31 in Edmonton In addition to McDavid, the Oilers were without the services of Joakim Nygard (hand) and Mike Green (knee) Out with injuries for the Golden Knights were Alex Tuch (leg) and Mark Stone (lower body). 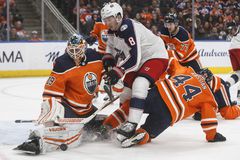 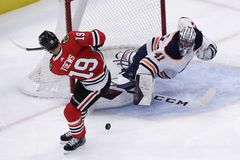 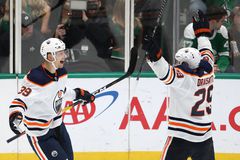