When it comes to the hype not matching performance, the Toronto Maple Leafs’ power play is right there with the DeLorean.

When it was unveiled at the start of the NHL season, the Leaf power play boasted nothing but star power: Auston Matthews, John Tavares, Mitch Marner, Nazem Kadri and Morgan Rielly. How would penalty killers ever stop this array of scorers, us media experts pondered.

Well, much like DeLorean’s famous gull-wing doors, the Leafs power play sprung a few too many leaks. The high-octane machine sputtered and stalled too often. So, with the unit falling to eighth in the NHL before Wednesday’s games with 25 goals in 112 opportunities, a success rate of 22.3 per cent, head coach Mike Babcock did some tinkering.

Matthews and Kasperi Kapanen swapped places, with Kapanen moving up to the No. 1 unit and Matthews moving down to the second tier. Presumably, this was done with at least some hope Matthews could finally spark some goals from William Nylander, who is still looking for his scoring touch more than a month after finally getting on the ice in the wake of contract problems.

But Babcock did the opposite for five-on-five play, moving Nylander off Matthews’s line and back to play right wing with Kadri and Patrick Marleau. Kapanen will go back to his old post as Matthews’s right wing for Thursday’s game in New Jersey against the Devils. Andreas Johnsson will stay as the left wing.

“It’s up to us to do a better job of producing,” Rielly said of the power play. “When you have a long dry spell you change things up.”

Looking at the power play over five-game segments, Babcock’s preferred way to break down a season, the unit was a powerhouse in just two of eight segments through Jan. 5. The Leafs exploded out of the gate with a 50-per-cent success rate in their first five games, scoring seven goals in 14 opportunities.

An elite power play operates at a minimum 25-per-cent efficiency. The Leafs only recorded one stretch above that in the next seven segments, a 38.5-per-cent mark in games 26 through 30, which ended Dec. 8. In the next two segments, the Leaf power play went 15.0 and 8.3, which finally forced Babcock to act.

The most obvious problem was that teams quickly figured out the key to stopping the Leafs power play was taking away its signature move – opening a lateral seam across the top of the faceoff circles so Marner could fire a pass across them to Matthews, who would be on the left side anywhere inside the top of the left faceoff circle, for his fearsome one-timer. Opponents were also moving to cut off the number-two move, getting the puck to Kadri in the slot.

There was a time when the Marner-to-Matthews play would have had a longer run through the NHL. Roger Nielson may have brought video to the league in the 1970s but it took many decades before it was widely used as a scouting tool. But in the past 10 years, the NHL became a league with no secrets.

“Everybody watches video, so sometimes some things work in games and you feel good and the next game that play isn’t there,” Matthews said. “Maybe we got a bit too stale and were springing the same thing over and over again.

“So I think it’s important to switch it up every once in a while and give [opponents] something different to get them back on their heels.”

One difference may be more plays aimed at creating traffic in front of the net, as both Kadri and Tavares will stay with their spots in close on the top unit. The other major change is probably the ice time given to each unit. Until now, the No. 1 group often stayed out for almost all of the two-minute penalties, given the amount of talent on the line. But Babcock indicated he plans to even out the ice time because it creates more competition between the units to score and earn a little more time on the next chance.

“We’re going to make a change and see how it goes,” the coach said. “Then we’ll go from there. We can always change back at any time.”

The other notable change for the Devils game is the return of Zach Hyman from a sprained ankle. His high-energy presence on the left side with Tavares and Marner should give the Leafs some of that “heaviness” Babcock likes to talk about when it comes to puck-pursuit.

Goaltender Frederik Andersen (groin) is still not ready to play and neither is backup Garret Sparks (concussion). This means Michael Hutchinson will start his third consecutive game for the Leafs and Kasimir Kaskisuo will be called up from the Toronto Marlies farm team to serve as backup.

Andersen said he hopes to play Saturday against the Boston Bruins, but Babcock said medical staff suggested a return is more likely on Monday against the Colorado Avalanche.

To make room for Hyman on the roster, forward Trevor Moore was returned to the Marlies. This means the fourth line will be Frédérik Gauthier between Par Lindholm and Connor Brown. 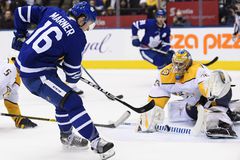 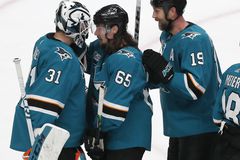 Leafs’ first half of season pleasing to their coach
Subscriber content
January 8, 2019 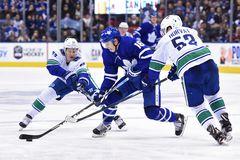