They are a couple, and most certainly matching.

They have similar facial piercings. They have Winnipeg Jets caps on and each wears a Winnipeg Jets jersey – he No. 33 to honour big defenceman Dustin Byfuglien, she No. 29 for Patrik Laine. They are trying their best to crowd into the standing-room-only Jets practice at the Bell MTS Iceplex on the western edge of town ahead of the team’s first playoff game on Wednesday.

Dave Spuzak, 39, is a duct cleaner. Katie Hawker, 34, does silk screen printing. They have been together 13 years and go to practices because, well, not everyone can afford actual games.

Why, they are asked, are Winnipeg fans so fanatical compared to hockey fans in the rest of the country? They are like Latvian hockey fans at the Olympics and world championships: dressed for the occasion, wound up and very, very, loud.

Mr. Spuzak says it is all connected to having once lost their team, when the Jets departed Winnipeg for Phoenix in 1996 and there was no NHL team in Manitoba for the next 15 years.

“I was here when we lost Jets 1.0,” he says. “We thought we could stop them from going but we couldn’t. Now that we’ve got them back we intend to make sure they don’t go – ever.”

Ms. Hawker, who wasn’t here in 1996, remembers that moment in 2011 when the failed Atlanta Thrashers became the reborn Jets.

“[NHL commissioner Gary] Bettman said we’d have to put butts in the seats every game if we wanted to keep the team,” she says. “Well, every game is a sellout.”

Nearly a year ago to the day, the Jets 2.0 version won their first ever playoff game when they came back in the third period to defeat the Minnesota Wild 3-2.

Mr. Laine, then still a teenager, scored the tying goal and said he couldn’t believe how the place “exploded” when they saw the red light go on.

The atmosphere in the downtown Bell MTS Place was unlike anything ever seen in this country. It was almost a complete Whiteout – every fan wearing white, with two women even coming in their wedding dresses – and they screamed “TRUE NORTH” (in honour of True North Sports and Entertainment, the group that brought the team back) so loud that it could be heard out on Portage Avenue, where thousands more stood about staring at the building and chanting “GO! JETS! GO!”

“We watch the games on television,” Ms. Hawker says, “and it’s so heartwarming when they’re in Colorado or Dallas or wherever and there’s always some Jets fans in the crowd shouting out ‘TRUE NORTH’ when they play the anthem.”

The players know it and appreciate the support.

“There’s a lot of energy in this city,” checking centre Adam Lowry says. “It’s hard to describe it until you’re finally there. Usually you don’t hear the noise when you’re in the locker room, but at playoff time you can hear it. … We expect the crowd to be pretty wild, pretty excited.”

The Jets will host the St. Louis Blues in the opening game of Round 1 of the Stanley Cup playoffs Wednesday and even the opposition is thinking of how loud and energizing the Winnipeg crowd will be.

“We haven’t had a playoff series there in a while,” Blues general manager Doug Armstrong said earlier. “And I’m looking forward to that environment. Hockey is a religion up there. It is the Jets – and the Jets alone.”

It is not a stretch to say that playoff fever has already struck. Cars and trucks fly Jets banners, “Go Jets” signs are going up on hotel entrances and, out in little Haywood, an hour west of the city, Dyson Labossiere is out to set a new record for tattoos, covering his body with 436 various Jets logos.

Dyson is seven years old. The tattoos, thankfully, are wash-away.

There’s now a political side to the Jets’ playoff run. There are rumours about that Premier Brian Pallister may call an early election, despite Manitoba’s fixed-date law that sets Oct. 6, 2020, as the next voting day. Mr. Pallister has been saying that is merely the “drop-dead” date and an election can be called at any time.

Surely, then, it is just coincidental that the province is offering up to $400,000 in funding to pump up this spring’s Whiteout street parties, when as many as 20,000 people have been known to fill the streets surrounding the rink on game nights.

Last year, with the Jets going far enough into the playoffs that there were nine such street bashes, the province coughed up a mere $2,000.

“The building is going to be awesome,” predicts Winnipeg head coach Paul Maurice. Just as the players will have to “up” their game, Mr. Maurice says the fans will be “upping” their game as well. They couldn’t possibly cheer at the same level during the regular season as they will be during the playoffs.

“We would wear out our season ticket holders after the first month if they had to put that [much] energy into it,” he says. “It’s going to be great. It’s going to be exciting.”

As for the matching couple, Mr. Spuzak and Ms. Hawker – who even adopted a humane society dog named after a former Jets player – they will be cheering Wednesday night but cannot afford to be there in person.

Opinion
Winnipeg Jets will have to put the work in to achieve postseason liftoff over Blues
April 9, 2019 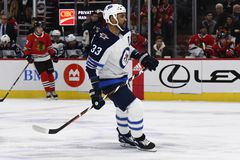 Jets, Flames and Leafs all have question marks in net heading into the playoffs
Subscriber content
April 8, 2019 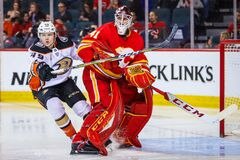 Opinion
Before Canada, the Flames and Jets went south in Atlanta
April 7, 2019 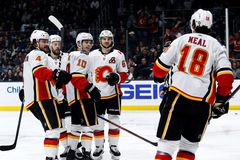