Vancouver
The Canadian Press
Published December 3, 2019 Updated December 3, 2019
For Subscribers
Comments
Please log in to listen to this story. Also available in French and Mandarin. Log In Create Free Account

As two of Marc Crawford’s former teams prepared to square off Tuesday, Ottawa Senators players and an ex-Vancouver Canuck in the spotlight steered clear of directing any criticism toward the beleaguered Chicago Blackhawks assistant coach

On a big day for Alex Burrows, the former Canucks forward recalled good memories of his time with Crawford.

Burrows, who was to be placed in the Canucks’ Ring of Honour Tuesday night prior to a home game against the Senators, said Crawford was “really good” to him during his time with Vancouver and Ottawa.

Crawford, a former head coach in Vancouver and Ottawa, is away from the Blackhawks after the club announced Monday night it is reviewing his conduct from a time with another organization.

“I can’t speak for anyone else, but for me, my personal experience with Crow is really good,” Burrows said of the native of Belleville, Ont. “He really helped me to understand what it took to play in the NHL. He gave me my first chance with the Canucks, he’s always been really good.

“He pushed me, he made sure I needed to play a certain way so I could achieve my goals and stay and play as long I did in the NHL. In Ottawa, when I saw him again [at the end of Burrows’ NHL career], he was a great Crow again. He taught me so much. He’s always been so good to me. At the same time, I can’t speak for anybody else.”

Crawford did not immediately respond to an interview request from The Canadian Press.

The Blackhawks didn’t provide any details about what they are examining, but former NHL forward Sean Avery recently told the New York Post that Crawford kicked him after he was whistled for a too-many-men-on-the-ice penalty when he played for Crawford with the Los Angeles Kings during the 2006-07 season.

Avery, however, went on Twitter Monday night and posted a video, saying “I loved Crow. He was my second favourite NHL coach. Fact.”

Speaking on a Barstool Sports podcast a year ago, former NHL defenceman Brent Sopel said Crawford “kicked me, he choked me, he grabbed the back of my jersey and just pulling it back.” Sopel played for Crawford in Vancouver.

Former NHL forward Patrick O’Sullivan, who played for Crawford in L.A., responded to the Blackhawks’ decision on Twitter.

“I talked about his physical abuse in my book 4 years ago kicking me and others on the bench,” O’Sullivan said, adding he is looking forward to participating in the investigation.

Before joining the Blackhawks, Crawford spent two-plus seasons as an associate coach with the Senators and then was named interim head coach late last year after the firing of Guy Boucher.

Senators defenceman Dylan DeMelo said he had no issues with Crawford.

“I had absolutely no problem with him,” DeMelo said. “He was great, great with me. He helped me a lot with my game last year. I think I took some big strides in my game. He played me lots and gave me lots of opportunities.”

“I can’t speak to what has happened in the past,” Borowiecki said. “I wasn’t there to witness any of that, I don’t know what transpired.

“One on one, he was always great to me. Again, each player has a different connection, relationship with the coaching staff. It’s tough to say how certain guys take certain things, or interactions. With me, personally, it was always fine.”

The issue with Crawford comes after Calgary Flames coach Bill Peters resigned Friday after accusations he directed racist slurs at a Nigerian-born player with one of Chicago’s minor-league teams a decade ago. Others claimed Peters kicked and punched players behind the bench during his recent time with Carolina.

Akim Aliu said Peters “dropped the N bomb several times towards me in the dressing room in my rookie year because he didn’t like my choice of music.” It happened during the 2009-10 season while the two were with the Blackhawks’ top minor-league affiliate in Rockford.

Crawford broke into the NHL in 1994 with the Quebec Nordiques after three years with the American Hockey League’s St. John’s Maple Leafs.

Crawford won a Stanley Cup the following season with the Colorado Avalanche after the franchise moved out of Quebec. He went on to coach the Canucks, Los Angeles Kings and Dallas Stars before a four-year run in Switzerland.

The 58-year-old Crawford returned to the NHL as an associate coach with the Senators in 2016.

Crawford interviewed for the full-time Ottawa job before the Senators hired D.J. Smith. Crawford then accepted a job in Chicago. 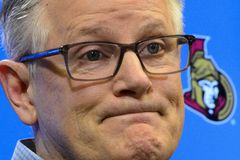