It has been five years since the Canucks reached the postseason, but they showed right away on Wednesday that they are not intimidated by the Stanley Cup defending champions.

Vancouver blew open a close game with three goals in the third period and beat the St. Louis Blues 5-2 in the first meeting between them in the first round of the Stanley Cup playoffs. The next game in the best-of-seven series is on Friday night at Rogers Place in Edmonton, the hub city for the league’s Western Conference teams.

Bo Horvat scored twice for the Canucks, but the winner came from an unlikely and inspired source. Troy Stecher ripped a slapshot past Jordan Binnington to put Vancouver ahead 3-2, and then pointed skyward as a tribute to his dad. Peter Stecher, who had been his son’s first hockey coach, died on Father’s Day from complications related to diabetes at the age of 65.

“I miss him every day,” Stecher said afterward.

His teammates celebrated and hugged him after his puck found the back of the Blues’ net. Stecher had five goals in 68 games during the regular season.

“It was a very emotional goal for him,” said Quinn Hughes, a fellow defenceman on the Canucks. The 20-year-old has a goal and six assists in the postseason. “He is a guy everyone loves. We are all really happy for him.”

“Anytime anyone goes through something like that, you feel sad for them,” Travis Green, the Canucks coach, said during a video call on Thursday. “I know [Troy] has probably had some hard days, so to see him [score a goal like that] was special for sure.

Vancouver lost the first game of its play-in series to the Minnesota Wild, but has since won four in a row. The Wednesday triumph was its first during a Stanley Cup playoff series in the post-Sedin-brothers era. It had failed to qualify for the postseason in five of the previous six years.

The Canucks had gone 2-0-1 against St. Louis in the regular season, and were not cowed by the Blues’ size and heavy style of play. Vancouver scored on three of its last four shots against Binnington. The second-year netminder stopped only 17 out of 22 shots.

After leading the Blues to their first Stanley Cup, Binnington complained when Vancouver’s Elias Pettersson was chosen as the league’s top rookie instead of him. Pettersson scored against him in the second period to put the Canucks ahead, 2-1.

Horvat, who has four goals in the five postseason games, opened the scoring in the first period, then quickly followed Stecher’s goal with his second of the night. The Blues were limited to eight shots in the third period and unable to mount much of a challenge.

A 25-year-old centre and the team’s captain, Horvat also had a hit and a takeaway and went 15-13 in the faceoff circle. He had two goals in three games against St. Louis during the regular season.

“When Bo is on top of his game, he just does a little bit of everything,” Green said. “Players go through [periods] where they just feel good on the ice, and I think that is what is happening with him now. He feels confident and strong.”

Markstrom, who had one of his poorest games this season when the Canucks eliminated Minnesota in the qualifying round a week ago, was outstanding. He denied St. Louis on 29 of 31 shots. J.T. Miller scored the Canucks’ other goal, while Brock Boeser and Tanner Pearson each had two assists.

“Getting that first win is huge for us,” Boeser said. “We feel we know the way we need to play to win.”

The Blues went 42-19-10 and their 94 points during the regular season were second only to the Boston Bruins (100). If they lose to Vancouver, it is unlikely they will go quietly. There is this, however: In its history, St. Louis is 7-14 in seven-game series after it loses Game 1.

Stecher’s goal provided the Canucks with Wednesday’s dramatic turning point, and his teammates rallied around him.

“Seeing him point up to the sky gave me chills,” Boeser said. “I’m so happy for him.” 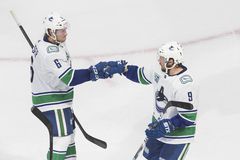 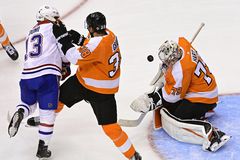