Two days after their Game 5 loss in the Stanley Cup final, the Canadiens’ players and staff met for the last time before they set out for a bittersweet summer.

Montreal’s postseason theatrics came to an end on Wednesday when the Tampa Bay Lightning won its second successive NHL championship. There is much the Canadiens will be able to look back at with pleasure, but right now the disappointment of defeat is too fresh.

“It is everyone’s dream to not only be in the final, but to win it,” said Jeff Petry, a defenceman and one of the alternate captains. “To be that close is an accomplishment for our team but it hurts.”

Petry, 33, has played a dozen years in the NHL. This was the first time he had played on a team that made an extended run through the playoffs. He understands the opportunity doesn’t come about very often, so he persevered despite an injury he suffered in the second round.

He played more than half the games during the postseason with two fingers on his right hand taped together then sewn inside his glove because he broke his pinky during the second round. In Game 2 in Winnipeg, Petry put his right hand against the glass to brace himself and push off, only to have his finger get stuck in a tiny hole. Momentum carried his body forward and the finger snapped.

“It was a freak accident,” Petry said. “When I got back to the bench and looked at it, my finger was pointed sideways.”

This is where a pro hockey player is different than most of us. Petry opted not to have surgery or to have his digit placed in a cast because then he would be unable to play. An alternative was proffered and he only missed two games.

“I passed out when they taped my fingers together,” he said.

The Canadiens supplied Canada with a much needed COVID-19 breather

Why didn’t MacLean ask Bettman about the Blackhawks?

Montreal’s players sat for questions, one after another. The sting of losing hung in the air. It was the first time the team had reached the final series of the Stanley Cup in 28 years.

“The ending wasn’t what we were hoping for,” said Eric Staal, a 36-year-old centre. “It was a disappointing ending but I am proud of each and every guy. This run was special. It was a treat to come to the arena every day. I will hold these memories close and cherish them forever.

“I just wish it had ended with the right result.”

Staal, who was acquired at the trade deadline, won a Stanley Cup with the Carolina Hurricanes in 2006.

Corey Perry, another 36-year-old forward, has lost in the finals two successive years. He won the Stanley Cup in 2007 with Anaheim.

“It’s hard,” Perry said. “You work so hard all season, and it comes to a screeching halt.”

Sixteen players, coach Dominique Ducharme and general manager Marc Bergevin, participated in the video call that stretched on for six hours. Goalie Carey Price, captain Shea Weber and forward Brendan Gallagher were not involved. The latter discovered his home in Montreal had been broken into when he returned home from Tampa on Thursday.

Ducharme was installed as interim head coach on Feb. 24 when Claude Julien was fired. The Canadiens went 15-16-5 with him in charge during the regular season and did not lock down the last of 16 playoff spots until the final game. They then went on a run during the postseason that ended with the defeat in the Stanley Cup final.

During that stretch, Ducharme was forced into quarantine for two weeks after he tested positive for COVID-19. He missed four games in the third-round series against Vegas and the first two games in the final round against Tampa Bay.

“It was a tough situation,” Ducharme said. “You feel so much, but it is out of your control. There was nothing I did to expose myself. It was bad luck I guess.”

Ducharme said he expected an announcement to be made soon about his status with the team.

“I don’t think it will be very long,” Ducharme said. “We’ll see in the next few days.”

Bergevin, who was among the three nominees for NHL general manager of the year, just completed his eighth season in Montreal.

“I have one more year on my contract and I will honour that,” Bergevin said.

The Canadiens played well at the start of the season and then tailed off, which caused Julien’s ouster. They never really returned to their early form until the playoffs.

They trailed Toronto 3-1 in the first round before rallying to beat the Maple Leafs in seven games and setting in motion their improbable run.

“It went by real fast,” Bergevin said. “I wanted it to never end.” 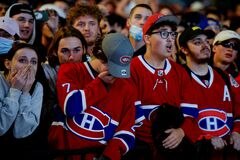 The Montreal Canadiens united Canada under their banner despite falling short of the Stanley Cup
July 8, 2021 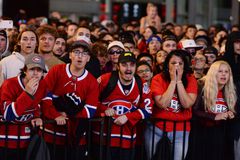 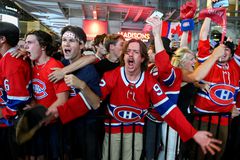