Tanner Pearson recorded his first career four-point game in the Vancouver Canucks’ 5-2 victory over the Edmonton Oilers on Saturday night at Rogers Place.

Connor McDavid and Zack Kassian scored for Edmonton, who dropped their second-straight contest.

Edmonton falls to 16-9-3, and still holds the Pacific Division lead, but the Canucks are now just five points back as they improve to 13-10-4.

The two division rivals will wrap up their back-to-back home-and-home series Sunday evening in Vancouver.

It was a nice bounce back game by the Canucks, who let a 4-2 lead slip away in their last game against the Penguins and fell 8-6.

“We needed that one, after the way Pittsburgh went. To get the lead tonight hold it and keep on pushing, was a big step,” said Pearson.

“There have been a couple of those games this year where it kind of slipped away in the third. No one really said anything — we all knew the job that had to be done.”

The Canucks power play has been red-hot on their six-game road trip and it propelled Vancouver to an early 1-0 lead.

Graovac, who was called up by the Canucks on Nov. 13 ripped a shot past Smith just 3:31 into the opening period.

Pearson extended Vancouver’s lead to 2-0 with his sixth of the season, and his second short-handed goal in five games. After a flurry of chances by the Oilers, Pearson took the puck down the right wing and tried to centre a pass to J.T. Miller, but the puck went in off of Smith’s pad.

McDavid gave Edmonton life, just 42 seconds later, but the opening frame was dominated by Vancouver, who outshot the Oilers 17-7.

“It was a great start and that helped set us the rest of the game and Marky (Markstrom) made unbelievable saves and kept us in it,” said Horvat.

Kassian scored his ninth of the season at the 5:05 mark of the second period to tie the game at 2-2.

After a flurry of chances by the Oilers that were denied by Markstrom, Vancouver struck twice in a span of 4:17 as Pearson scored his second of the game and Eriksson would tally his first goal of the season on a backhand feed from Horvat to give Vancouver a 4-2 lead.

It was the first time the trio played together this season and they were dynamite against the NHL’s top duo of McDavid and Leon Draisaitl.

“It was awesome to be back with Lou and Pears,” said Horvat.

“We we all ready for it, we all knew the assignment we were going against and I thought we did a great job.”

It’s been a rough season for Eriksson, who has been a healthy scratch for 12 games this year and when he’s been in the lineup, he’s been used sparingly, but he was excellent in his promotion up the lineup.

“We used that line last year a few times and I talked with Loui last week and we talked about his game and I felt when I put him back in, I thought I’d give him a different look,” said Canucks head coach Travis Green.

“He hasn’t complained once this year. He hasn’t played anywhere else but the fourth line and he wanted the opportunity and sometimes you have to re-assess things and we gave him that opportunity tonight and you have to give him credit, that line played real good.”

The Oilers have had some big third-period comebacks this season, but Leivo’s goal just 1:21 into the third period was too much for Edmonton to mount a comeback. Markstrom came up large with a big pad save off a McDavid chance in the slot, as the Canucks were in full control during the third period.

“It wasn’t a very good first period and we were getting at least some offensive zone time in the second period. But ultimately you give up five you can’t win in this league. We’re giving up too many goals right now and it’s costing us,” said Oilers head coach Dave Tippett.

“We’re just playing a little loose right now, looser than I’d like and chasing the game and we don’t have the same commitment to defending. We have to have the same mindset to defend a little better.” 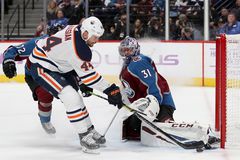 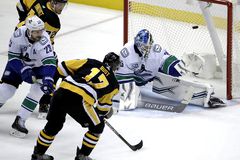