Marty Klinkenberg
Published May 21, 2021 Updated May 21, 2021
Comments
Text Size
Please log in to listen to this story. Also available in French and Mandarin. Log In Create Free Account

On the morning after John Tavares suffered a head injury, the Maple Leafs learned they would have to go forward in the playoffs without him. The team’s captain suffered a concussion when he took a knee to the head during the first period, and the club confirmed Friday that he will be out indefinitely.

Tavares was knocked down on Thursday night on a check by Montreal’s Ben Chiarot, and then struck by Corey Perry as the Canadiens forward tried to jump over him. Tavares’s head snapped back and he appeared to lose consciousness as a trainer rushed onto the ice and attempted to secure his neck.

Tavares was taken by ambulance to Toronto’s St. Michael’s Hospital and kept overnight. He was examined by neurologists and sent home in the morning to rest under the supervision from team physicians.

Head coach Sheldon Keefe said after practice Friday that he was unable to provide any additional information.

“There is nothing I can tell you other than what I already have,” he said.

Toronto lost the first game of its series with its long-time rival 2-1 on a late shorthanded goal by Paul Byron. Game 2 will be contested at Scotiabank Arena on Saturday. Games 3 and 4 are at the Bell Centre in Montreal on Monday and Tuesday. The first team to beat the other four times moves on to the next round of the Stanley Cup playoffs.

Pierre Engvall and Alex Galchenyuk, who did not play on Thursday, will be inserted into the lineup for the second encounter with the Canadiens. Nick Foligno will likely move from a position on the wing to centre and replace Tavares on the second line.

The 30-year-old Tavares had 19 goals and 31 assists during the pandemic-shortened 56-game regular season. He logged only 2 minutes 53 seconds on Thursday before he was injured in the frightening collision. In any given game, top forwards play upward of 20 minutes.

Players on both teams watched in grim silence as Tavares was attended to by the medical staff from both organizations. Teammates and opponents alike tapped their sticks against the ice as he was wheeled off on a stretcher. Perry came over to show his respect. Montreal goalie Carey Price skated out from his net to do the same.

“It was definitely a moment where your mind races a bit,” Jason Spezza, Toronto’s 37-year-old centre, said. “You think about his family having to watch that, and seeing your buddy on the ice like that is definitely a scary moment.”

As soon as play continued, Foligno challenged Perry to a fight and gloves were dropped. As they were lining up for the faceoff, Foligno told Perry, “Let’s settle this now.”

“You do what you have to do,” Perry said. He is 36 and known as a hard-nosed, edgy player.

Perry said he knows Tavares well and that the collision was unavoidable.

“He got hit and I was coming [from behind him],” Perry said in the moments after the Canadiens’ victory. “I tried to jump over him and unfortunately I caught my knee on his head. I don’t know what else to do there. It is an unfortunate incident.”

When he saw a replay on the screen above the ice, Perry said, “I honestly felt sick to my stomach.”

Keefe spoke to his team during the break between periods. He updated them with what little information he knew at the time: Tavares was conscious and able to communicate.

“They were pretty shaken,” he said. “There was a great level of concern and we addressed it. As difficult as it was, we had a job to do.”

The Maple Leafs, who won their division for the first time in 21 years, played a choppy, uneven game. They were good for stretches but made far too many mistakes. They were flagged for five penalties, including three times for flipping a puck over the glass and delaying the game.

“It just seemed like we were parading to the penalty box,” Foligno said.

Neither Auston Matthews nor Mitch Marner registered a point. They combined for 61 goals and 72 assists during the regular season. Joe Thornton coughed up the puck that led to Byron’s winning goal, and Byron got around 21-year-old defenceman Rasmus Sandin as he charged toward the net.

“It would be unfair to single out a couple of guys,” Keefe said. “I think a lot of our players need to be better. Clearly, what any of us did [Thursday night] was not good enough.”

Price, who stole a best-of-five-game play-in series from the Pittsburgh Penguins a year ago, made 35 saves.

“Big moments like this is what a goalie like him waits for,” Keefe said. “That is what we expected and that’s how he was. Goals are going to be hard to come by.”

Tavares texted most of his teammates Friday morning to let them know how he was doing. That eased their minds a bit, even if his return is uncertain.

“That’s our captain,” Morgan Rielly, the Toronto defenceman, said. “He has a lot on his plate day to day and he handles it with class. His play speaks for itself.

“The expectation now is that guys will play bigger roles and play well. In order to get back into the series, that’s what we need.” 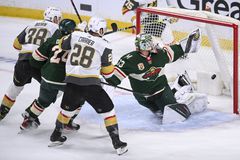 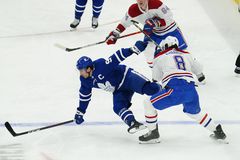