Hollywood has never shown much interest in hockey.

Still, you can’t help but wonder what MGM or Universal Studios would think if someone pitched them on a film feature about the 2021 Montreal Canadiens.

A team that begins the Stanley Cup playoffs with no fans at all in the stands and no hope among the experts who cover them and the “hockey insiders” who know all that is possible to know about the game.

A team that ended its regular season with key players injured – captain Shea Weber with an undisclosed “upper body” injury, irritant Brendan Gallagher with a broken thumb – with more key players (Jeff Petry, dislocated fingers) to be injured once the playoffs began.

A team that opened the playoffs with its fan base calling for the head of general manager Marc Bergevin, only to see him named a finalist for the Jim Gregory General Manager of the Year Award in late June.

A team down three games to one against the popular pick of the experts, the powerful Toronto Maple Leafs, and launches an unbelievable comeback to take the opening series in seven games.

Listen up, Hollywood – this has Frank Merriwell written all over it, Frank being the fictional character of about 300 dime novels, comic books and films a century ago. Strong, athletic, humble and determined, Frank was all about last-minute heroics and the snatching of victory from the certain jaws of defeat.

There is shock and emotion to be found at every turn, interim head coach Dominique Ducharme suddenly felled by a positive test for COVID-19 and assistant coach Luke Richardson forced to take over in Game 3 of Montreal’s semi-final series against the much-lauded Vegas Golden Knights.

Richardson gets his first-ever win as a head coach when his team scores a dramatic overtime goal for a 3-2 victory, and he celebrates not by fist-pumping or backslapping, but by looking heavenward and touching the “Do It For Daron” lapel pin he wears over his heart in tribute to the daughter who took her own life 10 years ago. The DIFD charity raises awareness about youth mental health.

The interim head coach failed, unfortunately, to get his second win when the Golden Knights were able to force overtime with a late goal on Sunday, before pulling off a 2-1 victory when Nicolas Roy scored at the 1:18 mark of the first overtime.

Unfortunately, the saying is not “What happens in Montreal stays in Montreal,” as the two teams will play Game 5 Tuesday back in Vegas, the series now tied at two games apiece.

Still, no matter the outcome Tuesday, there’s much to work with here for an imaginative scriptwriter.

There’s comedy in this story – the late Game 3 gaffe by Golden Knights goaltender Marc-André Fleury that allowed for overtime and the dramatic Montreal comeback. Sadly, one of hockey’s nicest persons may be less remembered for his Stanley Cups and certain selection to the Hockey Hall of Fame than for this highlight-reel misplay.

There’s cross-generational appeal, the Canadiens led by a couple of kids on the top line, 21-year-old Nick Suzuki and 20-year-old Cole Caufield, and two greybeards on the fourth line, 35-year-old Corey Perry and 36-year-old Eric Staal.

The colour red is a theme in this story; red for general manager Bergevin’s lucky suit, red for Montreal defenceman Petry’s weirdly bloodshot eyes, red for that liquid falling down Perry’s nose from a high stick from the Golden Knights’ Jonathan Marchessault in the Game 3 overtime – a high stick that was somehow missed by the referee standing close enough to be splashed with red.

What good story doesn’t have some controversy? The league officiating has rarely been under such scrutiny. It is perfectly legal, it now appears, to launch lacrosse-style cross checks into the spine of opposing players, but heaven forbid your stick graze the gloves of an opponent.

As Ken Campbell, a long-time hockey writer most recently of the The Hockey News, tweeted, “You know the officiating is particularly godawful when the Hockey Night in Canada folks are raking them through the coals.”

Campbell was right. “What’s the standard?” HNIC panelist Kevin Bieksa asked. “I have no idea.”

Entirely consistent, Montreal fans would argue. The Golden Knights can do no wrong; the Montreal Canadiens can do no right. “Fans always bitch,” long-time Montreal Gazette columnist Jack Todd tweeted. “But this feels deliberate, nasty and personal and it’s an ugly thing to watch.” Later he added, “This is a flying finger of fate flipped at the Canadiens and their entire fan base.”

At Monday’s press availability, neither coach nor players seemed open to discussing the dreadful officiating. Petry avoided the question. Richardson avoid the topic. Gallagher steered clear but then offered: “Everybody’s been watching. I don’t think I need to comment too much.”

And then he smirked – a moment with which film could do so much. 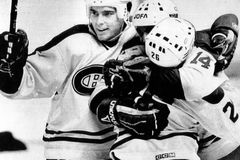 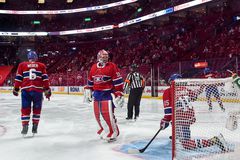 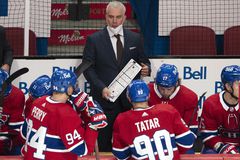