As he had done hundreds of times in his career, Bill Hunt sat down at his computer one morning in January and began crafting a weekly sports column for the Fredericton Daily Gleaner. While he typically writes about the wider world of sports, the subject of that week’s story hit close to home.

Hunt planned to pen an ode to hometown hero Willie O’Ree, the former Boston Bruins player and Fredericton native who became the first black NHLer in 1958.

Following a Bruins ceremony earlier in the week that celebrated the 60th anniversary of O’Ree’s first game, Hunt began drafting his outline by cataloging the awards and accolades bestowed on the man known as the Jackie Robinson of hockey.

But the absence of one special honour fuelled what became a call to action, titled “Time to Put Willie in the Hall of Fame.”

“How,” Hunt asked in a recent interview, “is Willie O’Ree, a black man who broke into the league when racism was rampant in the United States, five years before Martin Luther King’s speech, before the Red Sox had even been integrated yet, not in the Hockey Hall of Fame?”

After writing a follow-up story the next day detailing the Hall’s process around public submissions for its builder category and how someone could make their own push to get O’Ree elected, Brenda and David Sansom – two longtime friends of O’Ree – put their hands up and offered to prepare a formal bid.

“That’s when a snowball turned into a steam roller,” Hunt said.

Correspondence began pouring in as word got around a hometown movement was afoot. First it came from locals – fishing buddies and card-playing pals, Brenda Sansom said. They collected signatures at city hall.

Before long, notes and letters were arriving from across Canada and the United States.

In total, the trio compiled a 70-page document and submitted it to the Hall of Fame’s 18-member selection committee, which will decide by April 15, confidentially, whether to advance O’Ree’s name and formally nominate him. He would then need to be elected with at least 75 per cent of the committee’s votes in order to be inducted with the Hall’s 2018 class in June.

“This public-submission process has allowed us to learn firsthand about the far reaches of the positive influence of Willie O’Ree,” Sansom said. “Through it all our community and our country have come to realize what a priceless gift we have in this man.”

Beyond the dozens of letters of support from everyday people and hockey fans, the testimonials about O’Ree’s impact came from current and former NHLers; past premiers; a sitting premier; a former lieutenant governor; a Canadian senator and numerous community and advocacy organizations.

Joel Ward, the San Jose Sharks forward, typed a two-page tribute that explained what it was like growing up as a black hockey player and how O’Ree’s conquering of racial hurdles inspired his own career.

“What Willie has done for the game cannot be put into words. But it can be recognized,” Ward said. “When you think about ‘builders’ of the game of hockey, who has sacrificed more and given more of himself to the game of hockey than Willie O’Ree?”

Philadelphia Flyers forward Wayne Simmonds added his name to the cause this week with a piece in the Players Tribune.

“Without Willie, there would be no Jarome Iginla. There would be no Grant Fuhr, or P.K. Subban or Ray Emery or Dustin Byfuglien or so many others who have had the honour of playing in this great league,” Simmonds wrote. “There would definitely be no Wayne Simmonds.”

O’Ree’s date with destiny was Jan. 18, 1958. After beginning the hockey season with the Quebec Aces, he got the call every player dreams about: He’s was going to the big leagues, and would join the Bruins in Montreal where they were to face the Canadiens. He said he was unaware at the time how important that moment would become.

“I became the first black player in the NHL,” O’Ree said. “It was a big thrill for me. I didn’t realize I had just broken down a barrier for players of colour.”

While hiding the fact that he was mostly blind in his right eye, because he worried it might jeopardize his promotion, O’Ree played a pair of games for the Bruins before being sent back to the Aces.

A place in hockey history

It’s not that O’Ree doesn’t have a presence at the Hall in Toronto. In an exhibit celebrating milestones, there is a life-sized portrait of a young O’Ree. He’s leaning on his stick in a hockey-card stance, the Boston Bruins “B” emblazoned on his chest, his No. 22 patched on his arm.

Around the corner, in a glass display case celebrating diversity, rests a scuffed Northwood hockey stick with a nearly straight curve, the blade taped black, the knob white. “O’Ree” is drawn up the handle in permanent marker.

There are other traces of O’Ree throughout the museum, each one acknowledging his place in hockey history.

But for all those nods, O’Ree has yet to be inducted into the Hall of Fame, which would officially enshrine him as an individual among the game’s greats. Should he earn the votes and be elected, O’Ree would be immortalized by a plaque in the Great Hall, which is billed as a cathedral to the icons of hockey.

“It would be absolutely fantastic. What more could a person ask for? It’s the ultimate goal,” O’Ree said.

Now a diversity ambassador for the NHL, O’Ree travels across the United States and Canada speaking to children to spread a message of inclusivity in hockey. But no matter how far he travels, O’Ree said visiting Fredericton always feels like going home. He makes the trip at least once a year.

In a manner typical of Maritimers, neither the Sansoms nor Hunt take credit for the bid. Hunt said his colleague Bruce Hallihan, and his editor Andrew Waugh , deserve a nod for their part in staying with the story. He merely “planted the seed,” insisting the Sansoms have been the driving force.

The Sansoms, meanwhile, said it was Hunt’s writings that helped shine the light on O’Ree’s overlooked acknowledgement.

“You wouldn’t know it from his personality because he keeps a low profile, but Bill’s article started this whole initiative,” Sansom said.

O’Ree, 82, said it’s heartwarming to see the size of the homegrown effort on his behalf.

“I’ve still got many friends back in Fredericton. They followed my career when I left, and all these years later, it nice to know your friends back home still care about you.”

Nicklas Lidstrom is the ‘perfect human being’ for the Hockey Hall of Fame
November 8, 2015 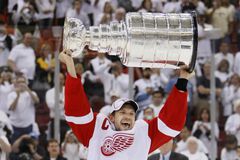 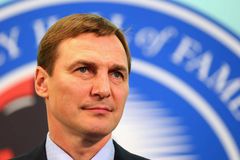 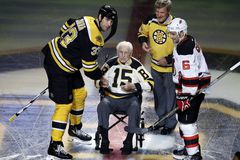