The next time the Toronto Maple Leafs begin talking like the future is now and success is imminent, they might want to think about the Tampa Bay Lightning first. Then they might want to seriously recalibrate what “now” means to them.

Tampa won the Stanley Cup Monday night. Over four playoff series, they trailed for a total of two games. This was a wire-to-wire domination.

“It might be one of the hardest cups ever to win,” Lightning coach Jon Cooper said as the final got under way.

Given the environs it was played in, he may be right. The Lightning didn’t just win an NHL title. They are now the very first minimum-security lock-up ice-hockey champions of the world.

If it looked easy while they were doing it, it seems a lot less so when you pan the camera back. Tampa has been a comer for so long, they had begun to seem like a goner.

The Lightning have been good – winning more games than they lose, with the expectations that creates – since around the time Steven Stamkos emerged as a star. That was about 2010.

Since then, they’ve had success – but with serious caveats.

They made a Stanley Cup final but lost three in a row after going up two games to one. They made two consecutive conference finals but lost Game 7 in both of them. Then there was the 2018-19 first-round total breakdown against Columbus.

That resulted in a change in approach. Tampa was no longer a fun, high-scoring team. Now they were grinders with a serious grudge. Like the Flyers, but Russian.

In the end, it wasn’t roster shake-ups that flipped the Lightning’s internal switch. It was some hard work in amateur group therapy.

This is one way to do it. It’s not the way hockey executives map it out on their career dream boards. But if Toronto is ever going to do it, then this is looking like their way, too. Which sounds both inevitable and impossible.

Tampa had been rammed with stars for so long that the stars changed (adieu, Martin St. Louis). They’d been prematurely crowned so often they had permanent hat head. They’d collapsed so spectacularly they had become a running joke.

It had gotten bad enough that Stamkos – one of the best-paid players in the game, a likely Hall of Famer – had become an object of pity.

If Tampa was in Canada, neutral fans would have hated the Lightning for their fecklessness. But since Tampa is in Tampa, people were confused by them instead. How could a team this good be this bad?

Does any of this sound familiar to you?

Now, the Leafs are not the Tampa Bay Lightning. They only wish they were.

If we use the same metric, the Leafs got good when Auston Matthews arrived. That’s four years ago.

In that time, Toronto has won zero playoff series. This year, technically, they didn’t make the playoffs. If this whole “building a champion” thing is a journey of self-discovery, Toronto has started walking backward.

The Leafs don’t have memorable collapses because they haven’t gotten themselves in position to memorably collapse. They’ve blown it a few times, but in the first round. The first round of the NHL playoffs doesn’t count for anything better than a participation ribbon.

Toronto’s stars do not match up with Tampa’s stars because Tampa has an unusual proportion of adults. The Stamkoses and Victor Hedmans of the world don’t spend a lot of time complaining about how unfairly they are treated by the press. Because there is no hockey press in Tampa. The only way the Lightning are going to lead the local sports broadcast is if they start playing football.

Geography and apathy shielded the Lightning from the real hockey world. The guy who owns the team, hedge-fund manager Jeff Vinik, bought it 10 years ago for US$170-million. In sports ownership terms, US$170-million is free. He bought it in 2010. He’s never known this team to be bad. So what does he know from winning? This has all been gravy to him.

Maybe this is why Vinik didn’t feel they needed to fire Cooper after last year’s Chernobyl re-enactment in the first round. Maybe that’s why Cooper didn’t coach or talk like he felt the clammy hand of professional death on his shoulder the whole season. And maybe that’s why the team likewise didn’t play like they were thinking of giving it all up and moving to the woods. None of these things ever has or ever could happen in Toronto.

You could feel Tampa breathing out on the ice during games, where other teams – losing teams – play as if they’ve thinned out the oxygen in the arena before the puck drop.

Whatever you want to call it – the zone, the groove, being in the moment – Tampa had it. Part of the reason they had it is because they were given 10 years to find it.

If that’s the template now, the Leafs can’t do that. Not because they’re less talented (though they are). They can’t do it because Toronto isn’t in Florida. Bizarrely, we have found the perfect environment in which to grow a delicate, artisanal professional hockey franchise. It’s in the subtropics.

Some day it’s possible that Matthews will be Stamkos, Morgan Rielly will be Hedman and Frederik Andersen will be Andrei Vasilevskiy. Probably not, but maybe.

But Southern Ontario will never be the Gulf Coast. Nobody’s going to wait six more years for something to happen. In Toronto hockey years, six seasons is four coaches, three major trades and two general managers.

So if the Leafs are getting it into their minds that they have all the time they need to figure this out, they ought to think about moving the franchise about a dozen degrees of latitude to the south. 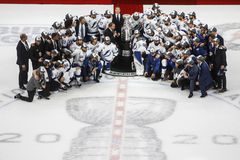