Desperation turns to jubilation in the NHL playoffs when a trailing team manages to score the tying goal late in regulation to force overtime.

That sudden change of emotions would figure to fuel a team’s momentum in overtime. But that’s not always the case, as evidenced the past three nights when a team that squandered a late lead managed to bounce back in overtime and earn a win.

Vegas and San Jose each experienced both sides of that roller coaster the past two games, with the Golden Knights responding with William Karlsson’s goal in overtime in Game 3 at the Shark Tank.

That came two nights after San Jose saw Nate Schmidt tie Game 2 with 6:32 left only to end up on the winning side on Logan Couture’s power-play goal in the second overtime.

“You just move on,” Vegas coach Gerard Gallant said. “It’s playoff hockey. We were disappointed when they scored with roughly two minutes left in the hockey game. … We regrouped in the overtime session between periods and said let’s go out there and get this game.”

The Blue Jackets are the only team this postseason to force overtime with a goal in the final five minutes and win, having done it in Game 1 against the Capitals.

For all the talk of late-game momentum, teams scoring those late goals are just 7-8 in overtime the past two postseasons.

“We weren’t too happy with this as a team,” said Vegas goalie Marc-Andre Fleury, who made Karlsson’s winner possible by robbing Couture earlier in the OT. “But everyone was relaxed between periods. We talked and we knew what we had to do.”

Momentum can be very fleeting in the playoffs whether in a game or a series. In the first five days of the second round, no team has won consecutive games in a series.

The Sharks will try to put the Game 3 loss in the past and continue that pattern to tie their series at two games apiece when they take the ice for Game 4 on Wednesday night.

“It’s easy,” Couture said. “The schedule-makers did a good job of playing games every other day so it’s easy to forget about a game when you’ve got another one (coming). … We’re down 2-1. It doesn’t matter how you got there or what the score was in any of the games, we’re down 2-1 and we’ve got a big game.”

The Bruins will look to do the same when their second-round series against Tampa Bay shifts to Boston for Game 3 on Wednesday night.

Boston won the opener handily 6-2 before falling in Game 2 in Tampa Bay 4-2 on Monday night.

“I think that feel good from winning, you take that emotion into the next game,” Lightning forward Chris Kunitz said. “But each game has its own identity, you can’t rest on what you did last game and just hope they walk away.”

Stay out of the box

The Sharks were one of the best teams in the regular season at avoiding penalties, going short-handed just 2.7 times per game for the fourth-lowest mark in the league. That discipline has been missing this round as Vegas has gotten 18 power plays in three games. The Golden Knights converted five of them, including two during a three-goal barrage in a span of less than five minutes of the second period in Game 2.

San Jose also went short-handed twice in overtime for having too many men on the ice and for delay of game.

“Obviously their two power play goals swing the momentum in the second period, but I didn’t think our discipline or penalties were a problem, just one of those nights,” coach Peter DeBoer said.

Brayden Point is just the latest player with a big-scoring night these playoffs. He had one goal and three assists for Tampa Bay in the Game 2 win over Boston, marking the 11th time a player has posted four points in a game in this postseason. This is just the second time in the past 20 years that there have been at least 11 four-point performances in the first 52 games of the playoffs.

“He’s a special player, and when big games come about, special players take over and he did that,” teammate Tyler Johnson said. “I can’t say enough about the guy.” 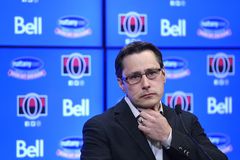 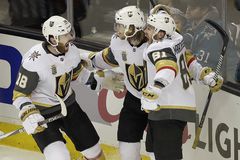 Brayden Point leads the way as Lightning rebound to even series with Bruins
April 30, 2018 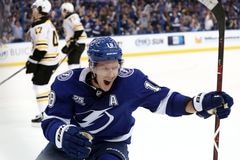 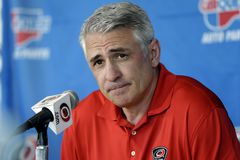 Winnipeg Jets star Mark Scheifele showing a nose for the net in the playoffs
April 30, 2018 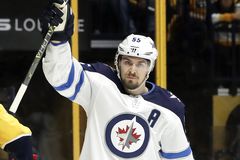