As he grew up, Jarome Iginla was the lone Black player on a number of hockey teams. At this time when racial inequality is being confronted around the globe, he feels fortunate to have had only two or three bad experiences playing his sport.

“I didn’t have a lot of the same challenges as other guys, but I am aware of them,” Iginla said Friday by telephone from his summer home in British Columbia. Two days earlier, the longtime Calgary Flames captain became only the fourth Black player elected to the Hockey Hall of Fame. “I know it happened to other guys, and it is very important to hear their stories. Just one is one too many.

“When somebody says something ignorant, it stands out. It’s hurtful, and it had an impact on me.”

Born in Edmonton and raised in nearby St. Albert, Iginla played 20 seasons in the NHL. He led the league in goals twice, was a six-time all-star and concluded his career in 2017 with 1,300 points. He was chosen to go into the Hall of Fame on his first time on the ballot.

“Lots of people had been nice and told me that I was going to make it, but when you look at some of the players that haven’t, you realize how hard it is,” Iginla said. “I tried not to think about it until the last few days. Then I was excited and a little bit nervous and had difficulty sleeping.”

He planned to gather with his family and friends on Wednesday around the time the newest inductees would be announced, but was running an errand when the call came earlier than was anticipated.

“It wasn’t what I’d planned, but it was still awesome,” Iginla said. “Growing up, I never imagined it. I just wanted to play in the NHL. The first five years were especially tough. I remember wondering early on if I would ever be able to score goals. Your confidence comes and goes.”

He joins Grant Fuhr, Angela James and Willie O’Ree as the only other Black members of the Hall of Fame.

“It is a huge honour and it is very humbling,” Iginla said.

Iginla spent 16 seasons in Calgary and 10 as the Flames captain. He is the club’s career leader in goals, points and games, and had his jersey retired in March of 2019 during a pregame ceremony at the Scotiabank Saddledome. In 2004, he fairly well carried his teammates to the seventh game of the Stanley Cup final, a loss to the Tampa Bay Lightning.

“Life goes so fast that it is hard to believe,” Iginla, who is now 42, said. “It makes you reflect on all the people that were there to help you, the billets and coaches and the amazing teammates. It brings you back, and you have so many memories.”

Iginla was drafted in the first round by Dallas in 1995 and was one of three junior players invited to the Stars’ training camp that fall. In all, 44 players were invited.

“As soon as I got there, they gave me my return ticket,” he said, laughing. “It was their way of telling me I had no chance. It didn‘t bother me. They had a very good team and I wasn’t ready.”

Dallas traded him to Calgary that December, and he was called up from the Kamloops Blazers of the Western Hockey League to play in two playoff games against the Chicago Blackhawks in the spring of 1996. He scored a goal and had an assist, and never again played at any level below the NHL.

He joined the Flames shortly after the league had started a diversity task force and was chosen to be the team’s representative on it.

“I came in at a really good time,” Iginla said. “The league would have programs for us at least once a year, and it was very valuable. We had sensitivity training and would talk about what was appropriate and what’s not. It gets heated at certain times on the ice, and we were told what was off-sides.

“These weren’t easy meetings to have, so I give them credit. We need to do more, but it was a good start.”

He watched as protests spread across the U.S. last month after a Black man, George Floyd, died with a white Minneapolis policeman’s knee on his neck. Prior to that, a Black man, Ahmaud Arbery, out for a jog was shot and killed in Brunswick, Ga. Three white men were charged in his death.

“It has been hard to watch,” Iginla, who lives in the Boston suburbs, said. “It scares me to think that they are caught on video, at a time when there is more scrutiny, and it still happens. Things need to change.”

“The protest movement is very important and I support it. It’s a big issue, and it’s deeply ingrained.”

“Guys like that speaking up and saying they aren’t going to be silent about it anymore is big,” Iginla said. “It will give other players more confidence to step up when they see something happen that is inappropriate. We have to all work to try to improve the environment and the circle we are in.” 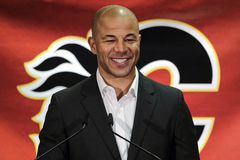 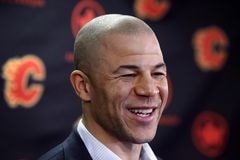 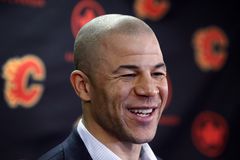