One day ahead of the biggest campaign in their recent history, a few of the key Toronto Maple Leafs couldn’t help but sound a little bored.

“Preseason feels like it was longer than summer,” Auston Matthews said.

Is this the best Toronto team you’ve been on?

What are you hoping to achieve?

I’m not sure those two ideas belong in the same sentence.

It’s almost as if having a dozen cameras stuck in your face is not conducive to forming coherent thoughts.

Or maybe it’s the idea of playing the Ottawa Senators in Wednesday’s season opener. Maybe that drains you of your wit.

They’re still advertising Toronto-Ottawa as the Battle of Ontario. For a long time now, it’s been more of a skirmish. These two teams now represent the polarities of the National Hockey League.

One is fancy in a gaudy and overpriced way, its reputation based more on heat than results. The other is hopeless and, if the NHL did such things, would fail a hockey inspection.

Something this lopsided isn’t a battle of anything anymore. Calling it one is an insult to actual battles – the Battle of Alberta; the Battle of Hastings; the Battle of Every Costco Parking Lot Everywhere on a Saturday morning.

Even at its hottest, the Leafs-Senators rivalry felt contrived. When it started off, Toronto was a bit of basket case, which meant the team couldn’t be choosy about its enemies. The Leafs wanted a fun, old-timey team, such as the Montreal Canadiens, but it had to take Ottawa instead.

At the height of strong feeling in the early 2000s, Leafs fans rallied around their hatred of Daniel Alfredsson. That was silly. You can’t hate a Swede. They’re too agreeable.

Sens fans agreed to channel all their animus at Darcy Tucker, which made a lot more sense.

But once the two teams stopped meeting in the postseason, everyone stopped caring.

For the past decade and a half, this strictly regular-season affair has become a dysfunctional Canadian Christmas. Everybody dislikes one another, but they still show up for dinner and try to be polite. No one enjoys themselves, but they do it again anyway. For the sake of nostalgia, if nothing else.

The illusion of hostility collapsed entirely over the summer. The two teams traded a half-dozen players in what was more of an art film than a blockbuster.

The Yankees don’t do trades with the Red Sox. Because that’s an honest-to-God rivalry that carries on regardless of how good either team is at a given moment.

When you do trades with someone, that means they are an opponent rather than a rival. These are now just two teams headed in opposite directions who happen to be within driving distance of each other.

If that’s what a rivalry looks like, the Panthers are rivals with the Lightning. And that is not the case. Even Floridians would give you that, right after you explained to them that you were talking about hockey. The thing with the puck. You’ve seen Slapshot, haven’t you? Oh, forget it.

Canadians cling to a Battle of Ontario out of parochialism. We want to believe our hockey matters more than American hockey (as if their hockey was any different).

There is a strong urge to fence the game and protect it from foreign elements. As Canadian franchises declined from the top of the food chain, that urge intensified. When the north-of-49 Stanley Cup drought became a measurable phenomenon, people began losing their minds.

That’s how an original-six franchise gets fooled into thinking it has proven something when it beats the newbies from up the highway in the first round of the playoffs (and then loses in the next round). It was a mark of Toronto’s limited aspiration that it thought that counted as an achievement.

Nobody talks much about the fact that Ottawa, for all its current failures, is having a much better century than Toronto. Given the way the club carries itself, it seems to have forgotten it, too.

In the end, this low-grade, no-stakes antagonism probably wasn’t good for Ottawa. It led it to believe that being better than Toronto – not exactly a high bar – amounted to something.

The people who run the Rangers can’t storm into their season-ending presser and start shouting, “We beat the Islanders! We’re No. 1 (in local, geographic terms)!”

In Canada, you can do that. Your team is awful? Sure, but I’ll bet it’s better than the Edmonton Oilers. And they were once really good. So that means your awful team is punching above its weight, Canada-wise.

For both their sakes, the Leafs and Senators need to let go of the Battle of Ontario. It was fun (not really, but let’s pretend). Now it’s in the way.

The Leafs need to begin thinking of the Stanley Cup curse as their only rival. That’s what they need to beat. We’re a long way past “high expectations.” There’s only one expectation.

The Senators need to figure out a way to be worth watching, while also being pretty terrible. That may be the hardest thing in sports to do. But that’s their only option for a little while.

Aside from the times they play, neither should be concerned in the least about what the other is doing. Every Canadian team should start thinking this way. The question isn’t ‘Can I beat Team X?’ It’s ‘How do I become the St. Louis Blues of this season?’

In fact, let’s forget about the battles of this or that for a while. Maybe they can pick it up again once somebody’s won something that includes a trophy. 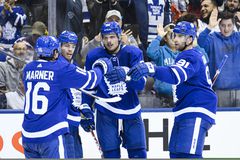 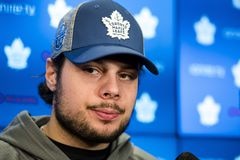 Opinion
Auston Matthews’s alleged behaviour shows he is not deserving of the Leafs’ captaincy
September 25, 2019