The Toronto Six will get another chance to hoist the Isobel Cup.

The expansion Six topped the standings at 4-1-1 on Feb. 3, when the NWHL suspended the season on the eve of the semi-finals because of positive tests for the virus.

The Six face the Boston Pride and the Minnesota Whitecaps take on the Connecticut Whale in the rescheduled semi-finals March 26, followed by the championship game the following day.

The NWHL, which pays annual salaries reportedly up to US$15,000, didn’t crown a 2020 champion in its fifth season because of the pandemic.

The 2021 Isobel Cup playoffs will be held with no fans at Warrior Ice Arena, which is the training facility of the NHL’s Boston Bruins and the Pride’s home ice.

“We’re just grateful to all those who believe in our athletes and really supported this quest to finish the Cup,” NWHL interim commissioner Tyler Tumminia told The Canadian Press.

“We’re grateful for all the athletes. They had to support it first. They definitely didn’t want two years without the Cup being raised.”

Pandemic restrictions in Ontario limited the Six to half a dozen practices as a team before their NWHL debut.

Toronto opened with two losses. In the second loss, the Six was up 5-1 on the Minnesota Whitecaps by the second period, but lost 6-5 in a shootout.

The Six then shook off their underdog status by rattling off consecutive wins over the Pride, Buffalo Beauts, Whitecaps and Whale to gain a semi-final berth.

“Not only belonged, but I think people feared us because of what we did bring,” head coach Digit Murphy said.

“Our brand of fun, fast and furious, we live it on the ice. I think it’s going to be hard to duplicate that. We’ll come with a different game plan, but we definitely belong. We’re here to stay.”

The COVID-19 wreaked havoc on the NWHL’s shortened six-team season operating in a “restricted access environment.”

The plan was to hold 24 games over 14 days with no spectators at Herb Brooks Arena, but the season was halted after 15 games.

The withdrawal of the Metropolitan Riveters and Whale by the 10th day – the Riveters citing several cases of the virus – had the league revamping the format on the fly before suspending the season.

Tumminia believes that disappointment will motivate players to comply with rules in place to prevent the spread of the virus.

“It wasn’t necessarily an issue with our protocols. It was an issue of enforcement, candidly,” Tumminia said. “Most of our athletes stuck to the plan.

“We all lost this chance at history. It’s not a good feeling.

“Now that you’re going to be given a second chance to get on that ice. I mean that’s not something they want to joke around with. None of us do.”

Toronto’s players and staff returned to Canada for their mandatory two-week quarantine after returning from Lake Placid. They’ll have to do so again after the Isobel Cup.

Murphy says it’s likely three or four of her 20 players will opt out because they can’t take an additional two weeks off from their jobs.

“Some of our players are not going to be able to come because of the quarantine,” Murphy said. “These guys have to work. We’ll do it with what we have. We’ll be the T6 and overcome adversity.”

Since the Six is travelling by bus, and not by air, they’re not required to serve the first three days of their isolation in a government-approved hotel upon return to Canada. 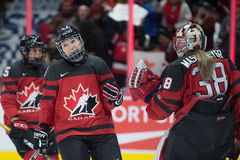 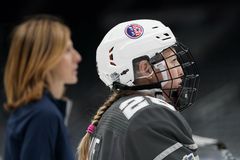