Given enough time, every momentous event in sport – or life, for that matter – is reduced to a single image.

It’s the brain’s filing system. This small thing reminds you of a much bigger one. Where you were when you found out about it, what you were doing, how you felt.

The first widely circulated image of the Humboldt bus crash showed the aftermath – wreckage strewn across the intersection of two highways in rural Saskatchewan.

But that’s not the mind’s-eye photograph people came to associate with the most powerful sports story of this year, and just about any other year.

Instead, when they thought of Humboldt, they pictured thousands of hockey sticks left by their neighbours outside front doors and on porches across the country.

They didn’t think of the coming apart that marks the outset of any tragedy, but of the great coming together that followed. Humboldt reminded Canadians that, on some very basic level, we are all in this thing together.

Klinkenberg: In Humboldt, it is possible to love again – and never forget the Broncos bus tragedy

We often speak of tragedy in sports – a tragic defeat, a tragic miss. It’s a verbal tic. Those aren’t tragedies. They’re disappointments.

Humboldt hit you with both. It came at the country in waves. For a moment, or maybe a few, everyone stopped to imagine themselves or someone they love on that bus. This feeling was intensified by the fact that the players were not famous names. They really were like the rest of us.

It’s too awful to wrap your mind around. Most people move on quickly rather than dwell on how quickly life can turn. Fear trumps pity.

Humboldt wasn’t a sports story, per se. But it was sports that gave Humboldt its power to affect all Canadians, and the template by which to respond.

Every once in a while, we’re reminded why sports are able to burrow so deeply into our collective psyche. Were you to explain the concept to a visitor from another planet – “a few people get together to chase an object around a bounded surface while the rest of us watch” – it might sound ridiculous.

But the purpose of spectator sports isn’t the sport. It’s benevolent tribalism. Us vs. them, but harmlessly.

Not everyone is a sports fan, but everyone is attracted by the concept. You may not be on the team, but you can be a part of it. You’re hoping your team wins. If they don’t, you share the loss in equal proportion to the players.

There are no barriers to entry. Anyone can participate. All one need do is decide to care. Sports fandom is perfectly egalitarian. That’s why we’re still doing it.

When the Humboldt crash happened, relatively few Canadians outside the Prairies had heard of the team. Canada is awash in these clubs – small-town concerns, kids with big hockey dreams, but most playing because they’re good at it and it makes people happy. They are a local conversation starter and something to do on a Saturday night.

Unless you are connected in some tangible way to Kamloops or Rimouski or the Soo, there would be no reason to root for one of them.

But once Humboldt happened, everyone in Canada felt themselves a part of that team. They didn’t know the players or the history, but they knew that’s how sports works. You want to be part of something and, therefore, you are.

Canada understood the symbology of the long bus ride to the next town over. Every one of us has, at some point, been on one of those buses.

It had the implements with which to pay tribute to a team in trouble – the sticks. Although it may never get used, everyone’s got a hockey stick tucked up somewhere.

The country understood instinctively that there would be a period of mourning, followed by the need to get on with things. Because, regardless of what happens, you eventually have to show up for the game. That’s how it works.

Humboldt gave Canada its defining tragedy of the year, something so connected to our core identity – a frozen landscape, a long journey – it might have been painted by Emily Carr. Sports gave us a language with which to commiserate. In the end, pity trumped fear, resulting in something like catharsis. What might have broken another town instead bound a country.

The Humboldt Broncos have returned to the business of hockey. After a Christmas break, they’ll be at it again on Wednesday at home against a team from Wilcox, Sask., a few hours down the road. Somebody will win and, in the larger scheme of things, it hardly matters. It’s the playing that counts.

This is the opposite of forgetting. It’s the most Canadian way we know how to remember.

In Humboldt, it is possible to love again – and never forget the Broncos bus tragedy
Subscriber content
December 28, 2018 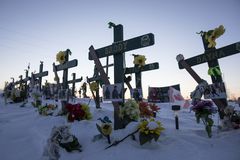 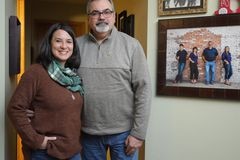 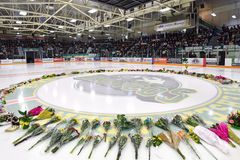