It wasn’t that long ago that the world of the Vancouver Canucks was enduring a slow-motion implosion. Of course, you may ask: When is it not?

Which would be fair, because there are few North American hockey markets as marked by perpetual angst as Vancouver. (Okay, Toronto is right there or slightly ahead based on population). But in Vancouver, it’s angst and fickleness followed by fickleness and angst. But the summer before last was a particularly heart-restricting one for the faithful, as owner Francesco Aquilini ended Trevor Linden’s four-year reign as team president.

Linden, of course, is the former team captain and all-around city icon. Hiring him as the executive face of the franchise was always going to be risky. Aquilini knew that. And when the team continued to struggle under Linden’s leadership, and reports of a rift between him and his general manager Jim Benning grew more ominous, something had to give.

Aquilini had to make a choice and he went with Benning, placing his money behind someone who had a solid track record of identifying talent.

Well, fast forward 18 months and the mood around this team couldn’t be more different. Three of its key players will take the ice this weekend in the NHL all-star game: goalie Jacob Markstrom, last year’s Calder Trophy winner, Elias Pettersson, and a defenceman expected to be a Calder finalist himself this year, Quinn Hughes.

The Canucks, meantime, headed into the break sitting in first place in the Pacific Division, not a spot many would have predicted for them to be at this point in the season. The team is more well-rounded than it has been in years. A defence that was badly in need of upgrade got free-agent Tyler Myers in the off-season. Tanner Pearson, who Benning stole from the Pittsburgh Penguins, has 14 goals and 23 assists playing alongside captain Bo Horvat, who has 16 goals himself, on a very good second line. Question marks that surrounded players such as Jake Virtanen, who has 14 goals, are quickly disappearing.

That is some of the supporting cast. The story of the Canucks this year is the stars. Straw-thin Pettersson has 21 goals and 30 assists, sitting just outside the league’s top 10 in league scoring. His linemate Brock Boeser has 16 goals and surely has hit more posts this season than anyone in the league. Hughes, meantime, has defied almost everyone’s projections (except his own) in terms of the impact he’s made this season.

He quarterbacks one of the best power plays in the league (Vancouver’s 43 power-play goals is the second-most in the NHL) and is averaging 21:36 minutes of ice time. He is often a one-man breakout, using his incredible skating skills to get his team out of trouble when trapped in its own end. He is simply far more advanced than anyone expected.

To my eye, however, the two biggest difference makers have been Markstrom and off-season pick-up J.T. Miller. Miller has 17 goals, 29 assists for 46 points, second only to Pettersson on the team. His biggest impact, however, might be in the dressing room, where his intensity has been noticed. There is no one on the Canucks who hates losing more than Miller, and that surliness of his that follows a defeat has rubbed off on his teammates.

At the time, many felt the first-round pick the Canucks had to relinquish to Tampa for the 26-year-old was too high a price. No one is saying that now. There isn’t a team in the league who wouldn’t give up a first-rounder to get Miller.

And then there is Markstrom, who, in a decade as a pro, has seen his share of disappointment. But this year, he’s probably handed in his best work. It’s one thing to have great games and make lots of fancy saves behind a lousy team. It’s another to make them behind a team fighting for a playoff spot in a tight division where every point counts.

And that is what Markstrom has done this year, come up big when his team was not at its best, turning sure defeats into surprising victories. And with a point or two separating a bunch of teams in an ultra-competitive division, he will likely have to be his same stellar self the rest of the way.

After St. Louis and Colorado, the Western Conference is a logjam. Between Dallas and the Canucks with 58 points, and Minnesota with 52, you have six other teams in between, including four just a single point behind Vancouver. In other words, all it takes is one really bad week to find yourself down with the Nashvilles and San Joses.

But right now, at least, there is optimism in Vancouver. It could last months and years, or it could last days or weeks. But it’s there for now, which is something at least. 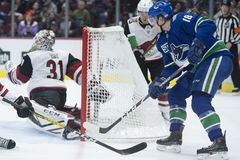 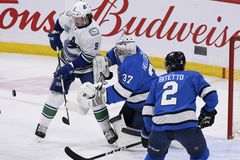 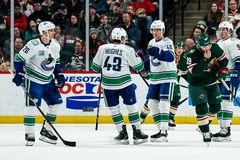