The Vancouver Canucks are packing a seven-game win streak in their suitcase and heading out on the road.

The winning span is the longest in six years for Vancouver. It has left the Canucks feeling good about themselves and their chances of ending a four-year NHL playoff drought.

Six of the victories have come at home, with the other in Calgary, just a 90-minute flight away. Their coming five-game swing, which begins Tuesday against the Tampa Bay Lightning, who have also won seven straight, will be a test of Vancouver’s ability to win three-time zones away from Rogers Arena.

“It’s an important road trip,” captain Bo Horvat said. “It’s going to be really big for us. We are playing well at home, but we have to find ways to win on the road as well.”

Forward Antoine Roussel said the eastern swing will be a good yardstick for the Canucks, who won’t have the last change to get the on-ice matchups they want.

“The game is different to win on the road,” said Roussel, who scored in a 2-1 win over the New York Rangers Saturday for his fifth goal in 14 games since returning from a knee injury. “If you don’t control the matchup, you [don’t] control some of the outcome of the game.

“It’s going to be cool to challenge ourselves. It’s exciting.”

Heading into Monday night, the Canucks’ 23-15-4 record leaves them third in the Pacific Division, two points behind Vegas and one ahead of Edmonton. Vancouver sat sixth in the Western Conference standings.

After the Lightning, the Canucks play the Florida Panthers on Thursday, then the Sabres in Buffalo Saturday. The trip ends against a pair of Western Conference opponents, with games in Minnesota on Jan. 12 and Winnipeg on Jan. 14.

“It’s going to be a tough trip,” said defenceman Chris Tanev, one of two players left from Vancouver’s Game 7 loss to Boston in the 2011 Stanley Cup final. “A lot of travel against some good teams.

“It’s going to be a challenge, especially toward the end when you are a little more tired. We’re playing conference opponents that are also in the hunt for the playoffs. Those games are going to be huge.”

A 3-1 defeat at home to the Montreal Canadiens on Dec. 17 was the Canucks’ third consecutive loss and fourth in five games. After beginning December in a playoff spot, Vancouver had sunk to 11th in the Western Conference and were four points back of Calgary for the final wild-card spot in the West.

Since then, Vancouver has beaten Vegas, Pittsburgh, Edmonton, Los Angeles Calgary, Chicago and the Rangers.

The longest consecutive win streak for the Canucks since between December, 2013, has lightened the mood in the dressing room, putting smiles on the faces of players and the coaching staff.

“We are feeling confident,” said Horvat, who has contributed three goals and five assists in the past five games. “It’s nice to be on a roll here. We have to keep it going. Every point is crucial now for the rest of the season.”

Several factors have contributed to the Canucks’ success.

Goaltender Jacob Markstrom has been outstanding. He’s started six of the wins and allowed two or less goals four times. He had a career-high 49 saves in a 3-2 win over L.A. and has been added to the all-star game roster.

The Canucks, who have struggled with scoring in the past, are generating plenty of offence, with six players scoring 10 or more goals.

Elias Pettersson, last year’s top rookie, leads Vancouver with 19 goals and 44 points. He has five goals and four assists in the past seven games. Defenceman Tyler Myers scored the winner against the Rangers, and has three goals and an assist in the past three games.

Defenceman Quinn Hughes has four goals and 26 assists on the season and is third in rookie scoring.

Vancouver’s special teams have also played a role. The Canucks have scored seven goals on 23 power-play attempts in the past seven games. Their penalty kill has allowed just three goals on 21 man-advantages.

So far this season, 11 Canucks have scored a power-play goal. The Vancouver power play is ranked fourth in the league at 26.1 per cent.

“I think we move the puck well,” said Pettersson, who has six power-play goals, second to team leader Miller with seven. “We’re not stressed to get the scoring chances. We don’t take bad shots.

“We move the puck well and take the shot when we have the play.”

The Canucks are trending in the right direction to end a streak of missing the playoffs five times in the past six years. Markstrom likes the way the team is playing, but said plenty of hockey remains.

“You have to keep the train rolling,” he said. “You don’t want to have long times of losing games. You want to string games together and we’re doing that right now.

“We can always play better.” 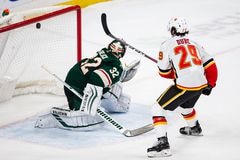 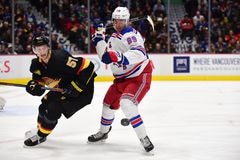