The story is now soaked in nostalgia. But given that it set the stage for arguably the most important moment in the history of the Vancouver Canucks, its retelling is apt.

Canucks general manager Brian Burke had been working on a difficult, multiteam, multiplayer trade ahead of the 1999 entry draft in Boston. On the eve of the big day, he and I found ourselves in a Boston pub. Something was cooking, he told me. It wasn’t all there. He needed one more piece to pull off something no one imagined him ever being able to do: draft both Henrik and Daniel Sedin, the twins from Sweden who most agreed were far more valuable together than apart.

As it turned out, Rick Dudley, the Tampa Bay GM, held the key to the entire deal. The morning of the draft, Dudley relented, giving up his first overall pick for players and draft picks. Atlanta moved up to the top spot and picked Patrik Stefan. This left Burke with the Nos. 2 and 3 selections, which he used to pick the twins. As both players walked up to the stage to pull Canucks jerseys over their heads, a stunned hush fell over the arena. Burke had pulled off the improbable.

“We worked hard to get the deal because we thought it was worth it,” Burke would tell me years later. “Did I ever think the twins would be as great as they turned out? I would be lying if I said that.”

The two greatest players in the long, tortured annals of the Canucks franchise will have their numbers – 22 and 33 – retired on Wednesday, ahead of the team’s game against Chicago. It is the most uncontroversial decision the team has ever made.

The past couple of weeks have seen former teammates of the twins recall with much affection their time in the company of these two great players. As much as they were admired for being extraordinary at what they did on the ice, they were loved for the type of people they were off of it. In the years that I covered the team, never once did I see them run for the showers after a tough loss, a standard stunt of so many lesser NHLers. No, the Sedins stood there and took it, just as they so often did on the ice.

I can’t think of two athletes who eventually starred in Vancouver who sustained more bullying and mocking in their early years. “The Sisters,” they were derisively called by the most prominent media voice in the city at the time, Neil Macrae. They didn’t fight, and didn’t fight back. They were supposedly soft. In fact, they were two of the hardest players on the team.

You can’t endure the kind of on-ice abuse the Sedins did, especially in their first few years in the league, and not be tough. Some nights, they must have wondered if they had done the right thing by coming to North America when they could have had a comfortable life back home starring in the Swedish Elite League. But their intense competitive nature would never have allowed that. They would adapt.

And then they would flourish.

The Sedins were never the fastest skaters in the league. They didn’t have to be. They became masters of the half-court, using a telepathy assigned to them at birth to pass the puck to each other without looking. They knew the other would be there in the next second. The announcers called it Sedinery.

And when they were at the height of their artistic powers, there wasn’t anyone in the NHL who was more fun to watch.

They made every player lucky enough to skate beside them better. They turned Alex Burrows, whose greatest asset prior to becoming their winger was hard work, into an NHL star. There will be statues of the Sedins outside Rogers Arena one day in recognition of not just their greatness on the ice, but their benevolence off it.

The pair made a splash when they donated $1.5-million to BC Children’s Hospital in 2010. Yes, it was a lot of money. But more important were the hours upon hours they spent in the company of the children inside the institution. And at Canuck Place, the children’s hospice that came to expect regular visits from the pair, rarely with a camera in tow.

The Sedins retired in the spring of 2018 with numbers that should make them first-ballot Hall of Famers. They both won league scoring titles, with Henrik adding a Hart trophy to his résumé, while Daniel had to settle for the Ted Lindsay Award given to the league MVP as voted by the players. They both have Olympic gold medals. They got to Game 7 of a Stanley Cup final.

They are two of the nicest people you’ll ever meet. Which is why there will be more than a few tears shed in Vancouver Wednesday when the classy twins watch their jerseys rise to the rafters. 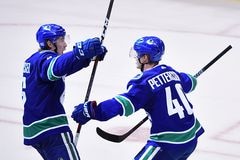 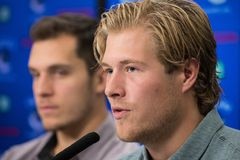 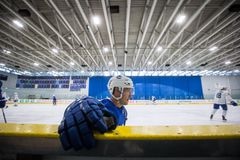