Victor Hedman has ample motivation to get his banged-up body ready for a regular season game that feels different from any he’s played before.

Hedman was racing against the clock to recover from a lower-body injury in time not to miss a possibly once-in-a-lifetime opportunity to play NHL games in his native Sweden.

Although he was not directly declared fit to play, the defenceman said he was “hopeful” to be ready for a two-game series on Friday and Saturday between his Tampa Bay Lightning and the Buffalo Sabres in the Swedish capital as part of the 2019 NHL Global Series.

“The final decision is tomorrow,” Hedman said after practice on Thursday. “We’ll see how it goes but [I’m] very hopeful.”

“I’m hopeful he’ll be in tomorrow,” he said.

A stalwart for Tampa Bay’s defence, Hedman missed the team’s first practice in Stockholm after arrival on Sunday after sustaining the injury on Oct. 29 against the New York Rangers, and things didn’t look good when he didn’t practice on Monday.

Cooper said it was critical for Hedman to start skating on Tuesday. And he made it, determined not to just serve as a tourist guide to his teammates during the trip to his homeland as the lone Swede on the team.

“It hasn’t been easy since last week in New York. A lot of stuff has been going through your mind, it’s a lot of worries,” Hedman said. “Obviously, I’m very happy with the progress I’ve made in the last couple of days. We’ll see what tomorrow’s gonna bring.”

His absence in the past two games was felt, with Tampa Bay allowing 11 goals.

Hedman had nine points – two goals and seven assists – in 11 games before missing games against the New Jersey Devils and the New York Islanders.

He was No. 2 pick in the 2009 draft for Tampa Bay, a year after the Lightning opened the season with two losses to the New York Rangers in Prague.

The Norris Trophy winner as the NHL’s top defenceman in 2018 might not get another chance to play at home, despite the NHL scheduling games in Europe regularly.

It’s the third straight year – and eighth over all – that the NHL returns to Europe to try to increase its local following in hockey-mad countries including Sweden, Finland and the Czech Republic.

The Philadelphia Flyers beat the Chicago Blackhawks 4-3 in their season opener in Prague on Oct 4.

Buffalo has five Swedes, including forwards Marcus Johansson, Johan Larsson and Victor Olofsson, defenceman Rasmus Dahlin and goalie Linus Ullmark, while another one, defenceman Lawrence Pilut, was recalled for the trip from the Rochester Americans.

“You never even dream about that, playing an NHL game in Sweden and having all your family and friends there,” Johansson said. He played in Gothenburg, Sweden, for New Jersey last season against the Edmonton Oilers.

“I feel very fortunate to have done it and even more fortunate to get to do it again,” he said. “It’s just something that doesn’t happen very often. It’s very special. I don’t think the guys over here get it. They play close to home a lot, but we don’t really get the chance to do it.”

Of the two teams, Buffalo, surprisingly, has been off to a stronger start this season.

Under new coach Ralph Krueger, who took over in the midst of an eight-season playoff drought – the NHL’s longest active streak – the Sabres opened with an 8-1-1 record to match their best start since 2009-10 and lead the Eastern Conference.

“We’re expecting a real high-level battle from both teams,” Krueger said. “Tampa’s certainly feeling the same thing as we are. That was our primary focus here. ... Let’s use this space to really show the best Sabres hockey possible this weekend.”

The Lightning (6-5-2) are far short of last season’s standard, when Tampa Bay dominated the regular season and tied the NHL record with 62 wins.

“We’re staying positive here,” Tampa Bay captain Steven Stamkos said. “We realize that with the group we have we’re going to continue to work hard. Hopefully, a trip like this can even bring us closer together as a group and maybe help us moving forward.” 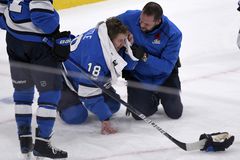 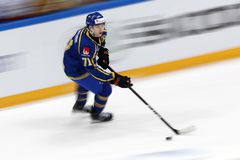