Cathal Kelly
Published May 10, 2021 Updated May 11, 2021
For Subscribers
Comments
Text Size
Please log in to listen to this story. Also available in French and Mandarin. Log In Create Free Account

He’s doing the flirting with TNT, which is broadcast exclusively in the United States. That means we won’t have to see it. Small mercies, people. Small mercies.

The NHL’s U.S. TV rights were recently flipped from long-time host network NBC to a combo of ESPN and TNT. Both new entrants want to jump into the market with a bang.

To people whose total understanding of hockey is that it is played on ice by people who are all missing teeth, Gretzky must sound like that bang. In fairness, his teeth are fabulous.

For your average American television executive, Gretzky must be more of an idea than an actual person. Ms. TV Executive might vaguely remember him as a player. More likely, the name summons up a time when hockey was, very briefly, cool in L.A.

Our theoretical TV powerbroker has never heard Gretzky speak in public because he does so so rarely. All she knows is that he’s Canadian. That means he must be nice. Also, he is genetically hard-coded with an ability to explain hockey in exhilarating detail. It’s all those people do up there between igloo season, bear-hunting season and chasing-bears-out-of-the-igloo season.

As Canadians, we know better. Everybody loves Wayne Gretzky. There’s a very specific clause in the Charter of Rights and Freedoms that addresses this point.

But we know that Gretzky is no great talker or raconteur. Whether he is capable of telling an even mildly amusing anecdote is still up for grabs because despite being the most beloved figure in the country for more than 40 years, he has yet to do so.

If hockey players are dull – and they are, by far the dullest athletes in the great panorama of global sports – it’s because Gretzky taught them to be that way. Smile and nod. Smile and nod. It’s nearly impossible to criticize someone when they’re smiling and nodding.

During his long stretch as a public figure, Gretzky’s had two famous non-hockey-based appearances on television. The first was a cameo on The Young and the Restless in which he was so wooden, he appeared to be a floorboard that had popped up to vertical and begun mumbling.

The second was a guest appearance on Saturday Night Live that set new lows for the intersection of athletics and comedy. Some things are so unfunny they become funny. This was so unfunny, it made you despair of ever having fun again.

Gretzky, God love him, is not good in front of a camera without a stick in his hands. He was a peerless hockey player, is a nice guy and will be the worst sports analyst of any kind in the history of network television. Which, when you think about it, is a good reason to cheer for this to work out.

The news he is being pursued was kind of, sort of confirmed by one of Gretzky’s reps this past week. Endeavor president Mark Shapiro told the New York Post that ESPN could not bow out on his client, because if there’s bowing out to be done, his client is the one who does it.

“If he goes to Turner [TNT], it’s because they gave him a much better offer than ESPN.”

That right there already sounds like a bad idea. It’d be one thing if Gretzky just popped up on TV next year. It’s another if he’s holding a public auction. That creates an expectation. An expectation that cannot be met unless we’re talking about some other, more flamboyant member of the Gretzky family the rest of us haven’t met yet.

There are two types of good sports TV analysts – explainers and screamers.

Explainers explain. This is an incredibly difficult skill. Only a former pro can do it – because who else would you take seriously? – but most of the ones who want the job are terrible at it.

It’s not that these pros don’t understand what’s going on. They just lack the ability to boil it down for the lay audience. The only guy in hockey who does it well is TSN’s Mike Johnson. You feel as though you’ve learned something after he’s done talking.

Can you imagine Gretzky breaking down plays in real time? There’s a reason he was a failure as a coach. It’s the same reason he can’t be an explainer on TV – he doesn’t know how to teach hockey. It comes too naturally to him.

That leaves him the other option – screamer.

As analysts, screamers create the best television. What did Don Cherry ever explain about hockey? Nothing. Coach’s Corner was just barely in English.

It was Cherry’s willingness – enthusiasm, really – to play human flamethrower that made him special. Eventually, it made him unemployed. But 40 years spent living in the bullseye of the Canadian cultural consciousness is a pretty good run.

No one has come remotely close to replacing him. Whether that’s a failure of talent spotting, vision or bravery, it’s hard to say. Probably a combo.

Right now, TNT broadcasts what is far and away the best panel in sports – the Inside the NBA crew. There are no explainers in that group. There is a referee (Ernie Johnson), a voice of reason (Kenny Smith) and two verbal scatterguns (Charles Barkley and Shaquille O’Neal).

Barkley is also impervious to criticism because he doesn’t care what anyone thinks of him. Revelling in this freedom is what makes him an even bigger star on television than he was as a player. The only point of comparison that leaps to mind is tennis and John McEnroe.

TNT must hope that in Gretzky, it would be getting hockey’s Barkley. If so, that can only be because it has never actually talked to the guy.

Maybe Gretzky has it in him. Maybe he’s kept his personality tucked away in a safety deposit box all these years and is finally ready to unleash it on the world. Maybe that whole blank stare/mirthless smile combo he’s been deploying for decades to avoid saying anything interesting was a cunning ruse.

But if I owned TNT, I’d take the money I was going to pay Gretzky and ask Barkley if he has any spare time to talk about hockey. Then I’d turn on the camera, step back and let it run. 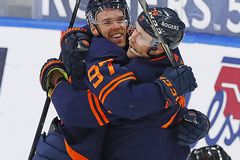 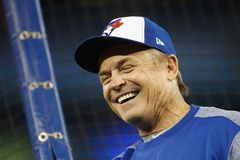