Captain Blake Wheeler’s goal early in the third was the winner as Winnipeg secured the victory despite surrendering a 4-1 advantage and being outshot 45-24.

“That’s a perfect example of why coach’s years and dog years are the same, the lives lost on the bench tonight between [Edmonton head coach] Dave Tippett and myself,” Maurice said. “It was not a particularly well-played game, we can all agree on that, except the skill level in parts of that was extreme.

“If you had fans in the building, that was a roller-coaster for everybody. So we’ll feel we gave up way too much but there’s a section when you play Edmonton that they take from you, that they generate that is just so good.

“Aside from that, there was still a big chunk of the game that was loose and ugly and really fun to watch unless you’d like to live a long life as a coach.”

Wheeler deflected Josh Morrissey’s shot for his fifth of the season at 6:22 of the third after Edmonton rallied to tie the score 5-5. Wheeler’s heroics came after Mark Scheifele stoke the puck from Edmonton’s Dominik Kahun.

Winnipeg (9-5-1) got back into the win column after dropping a 2-1 decision to the Ottawa Senators on Saturday night. Goaltender Connor Helleybuck improved to 9-1-1 in his last 11 starts versus Edmonton, shutting the door on Oilers captain Connor McDavid with a minute remaining and the goaltender on the bench for the sixth skater.

Alex Chiasson and Ryan Nugent-Hopkins both scored twice for Edmonton (9-8-0), which lost for the first time in four games. Kailer Yamamoto had the other.

Tippett said Edmonton didn’t hit a lull after expending a lot of energy to make it 5-5.

“I don’t know if it was so much a lull as much as a mistake that we made,” he said. “We turned the puck over at the defensive blueline when it should’ve come out and then we didn’t defend very well in front of the net.

“It wasn’t a lull, we made two mistakes and it was in the back of our net.”

“I don’t think that’s the way the coaches drew it up or maybe the goaltenders but I’m sure it made for some great hockey to watch,” Connor said. “(It’s) definitely more fun on the winning side looking back on it.

“Just one of those games where they were trailing . . . and they just started really opening it up and we kind of let off the gas for a bit. If you do that against any team, especially the type of players they have over there, they’re going to put a couple in your net.”

“That was a big goal for us,” Connor said. “He plays the game the right way, 60 minutes and he’s our leader, captain, that’s what you want.

“He’ll go to the hard areas and go to the net and get a tip. It was a big goal, a big game-winner.”

Scheifele opened the scoring on the power play at 6:30 of the first when he took a nice cross-ice pass from Wheeler and fired a shot past Mike Smith for his seventh of the season.

Smith got the start after stopping 38 shots in Edmonton’s 3-0 win over Montreal on Thursday night. It was Smith’s 40th career shutout.

Winnipeg chased Smith from the game early in the second. Appleton made it 3-1 for the Jets with his fourth just 49 seconds into the period before Ehlers registered his 10th at 2:31.

That sent Smith, who surrendered four goals on 11 shots, to the Edmonton bench in favour of Mikko Koskinen.

Edmonton pulled to within 4-3 on goals from Nugent-Hopkins, his sixth on the power play at 9:12, and Yamomoto’s deflection for his fifth at 12:57. Perreault scored his third at 14:15 to put the Jets up 5-3 before Chiasson registered his second of the game at 17:39 as the Oilers outshot the visitors 22-9.

Nugent-Hopkins made it 5-5 with his second of the game and seventh of the year 2:55 into the third. 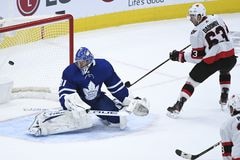 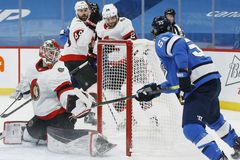 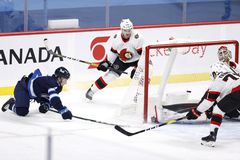