When Canadian hockey fans tune in to the NHL all-star game celebrations this weekend, they’ll be treated to the usual sights: celebrities strolling a red carpet, skills competitions, whiplash three-on-three games and a tsunami of corporate promotions. But there will be one notable difference: Bud Light, brewed by Anheuser-Busch InBev, the corporate parent of Labatt Breweries of Canada, will be one of the event’s chief sponsors for the first time since 2011.

Its return to the game involves a rare truce in the domestic beer wars, which once got so ugly they made it to Ontario’s top court, illuminating the ways in which two industries that are central to the Canadian identity – brewing and professional sports – are under increasing pressure from changes in consumer and fan behaviour.

As beer sales in Canada dry up and profit margins fall, and media platforms to reach consumers multiply endlessly, brewers are re-evaluating the big-ticket contracts that sports leagues have been demanding. Bud Light is back in the picture because, after eight years in an exclusive relationship with the NHL, Molson has agreed to let the league see other brewers.

And so, for the first time in decades, the NHL, Molson and Labatt have agreed to a three-way relationship. During a phone interview the other day, Kyle McCann, the NHL’s senior vice-president of North American business development, was asked about the league’s dating status. He chuckled and said: “It’s complicated.”

It’s also stunning, considering the back story. In the winter of 2011, Molson stole the exclusive rights out from under Labatt, which had had them since 2002. Labatt took Molson and the NHL to the Ontario Superior Court, arguing it had already come to a binding agreement with the league for an extension of its rights. In July, 2011, the Court of Appeal ruled otherwise, allowing Molson to pay a reported $375-million over the following seven years, including $100-million for the rights themselves as well as mammoth amounts for ad buys and other promotional costs.

News of the new arrangement trickled out in an oddly muted fashion: In late December, the NHL issued a press release announcing it had struck a multiyear partnership with Labatt, making Budweiser “an (which is to say, not “the”) Official Beer of the NHL.” A few weeks later, the NHL and Molson followed up with what they called “a multiyear extension of their partnership, continuing Molson Canadian’s long-standing position as an Official Beer of the NHL in Canada.” (“An,” not “the.”)

The deals give the brewers the rights to use the NHL’s intellectual property, such as its logo, as well as the ability to leverage its marquee events (the all-star game, the various outdoor games, the Stanley Cup playoffs) in their own marketing.

McCann characterized the arrangements as “semi-exclusive,” with two brewers granted rights in each country: AB-InBev in the United States and Canada; the Boston Beer Company in the U.S., where it is leveraging the NHL to market its Truly Hard Seltzer beverage; and Molson in Canada.

Exclusivity used to be the coin of the realm. But with the premium prices demanded by leagues prompting sticker shock, marketers are realizing there are other ways to build bonds with their consumers. “Over time, the investment needed to have exclusivity, it just kept growing and growing and growing,” said Brian Collins, the senior manager of partnerships for Molson Coors Canada, in an interview. “Not just the NHL, but in general. And there comes a point where the investment doesn’t really [make sense].”

That’s partly because the Canadian beer industry is in a long-term slump that seems unlikely to turn around, as consumers migrate to other beverages. (In a reflection of that reality, Molson Coors Brewing Company rebranded this month to the Molson Coors Beverage Company.) Domestic beer sales have fallen roughly 14 per cent in four years, dropping from about 18.97-million hectolitres in 2015 to about 16.34-million hectolitres in 2019, according to the industry trade group Beer Canada. Last year alone, domestic sales fell 3.9 per cent.

David Kincaid, a former Labatt marketing executive who is the founder and managing partner of the Toronto-based consultancy Level5, said pro sports leagues need to adapt to the new market realities.

“The message being sent back to the league – and this isn’t just the NHL, this is professional sport, or just about anything you can point to that the brewers have used as a promotional platform – they are pushing back now, saying, ‘I don’t need exclusivity, I will leverage my brand and I will develop innovative [promotions] using social media. There are other ways to engage with and connect with my consumer, so I’m not going to pay that top dollar that I once did.’ And they would say that’s a strategic logic. But behind the scenes, it’s also a financial logic.”

And the leagues may have helped to kill the golden goose by allowing their individual teams to also sell off their intellectual property. On the very day in July, 2011, that Ontario’s Court of Appeal released its decision on the NHL-Molson deal, Labatt announced it had signed exclusive sponsorship agreements with the Vancouver Canucks, the Calgary Flames and the newly relocated Winnipeg Jets. Molson, meanwhile, has sponsorship deals with the Montreal Canadiens, the Edmonton Oilers, the Ottawa Senators and the Toronto Maple Leafs.

A Labatt executive acknowledged that owning the rights to a sports league’s intellectual property isn’t enough to forge meaningful relationships with fans: You need to figure out how to use it in creative ways that capitalize on what the industry calls “moment marketing.”

That means “identifying the conversations that are happening in culture already,” said Todd Allen, the vice-president of marketing for Labatt.

“So, using hockey as an example: Conversations are already happening around hockey, around all-star weekend, around the puck drop of the regular season, around the Stanley Cup playoffs. So how do you insert yourselves in those conversations, to become more relevant, to be more meaningful in culture and to ultimately earn consumers’ attention?

“We try to get insight into those conversations and then build content plans around that, to be a part of the conversation and build our affinity with our fans.”

He added that marketers realize they “need to stop interrupting people with your advertising, and start entertaining them, or providing utility around things that they’re already talking about it and caring about.”

NHL all-stars interested to see how Matthew Tkachuk-Oilers rivalry plays out as they team up for Pacific Division
January 23, 2020 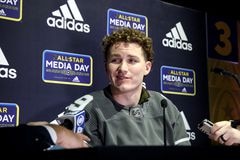 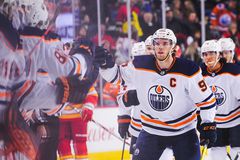 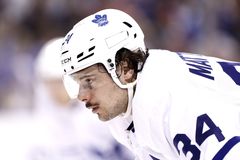