Patrick Marleau's first game back in San Jose after he left the Sharks last summer to sign with the Toronto Maple Leafs is a big one in his eyes – he packed up his wife and kids for the trip.

But if the slick winger's homecoming Monday night is to be a memorable one then someone other than him needs to be on his game. That someone is Leafs goaltender Frederik Andersen, whose inconsistency this season is making the team's recent troubles – forwards fumbling away the puck in the neutral zone and not backchecking and defencemen running around in their own end – a lot worse.

It is fashionable again to say NHL championship teams only need good, not great, goaltending. Like most theories, there is some truth to it, but there is just as much evidence to the contrary. The Boston Bruins, winners of the 1970 and '72 Stanley Cups, did so by employing not only Bobby Orr and Phil Esposito but Gerry Cheevers, a rotund goaltender who never had great statistics but would, in the words of a Sports Illustrated writer, look up in the third period, see his team up 6-4, put down his cigar and the Daily Racing Form and stop everything in sight.

The most unsung hero on the great Edmonton Oilers of the 1980s was goaltender Grant Fuhr. The reason Wayne Gretzky, Mark Messier and the rest of that gang could run wild was that they knew Fuhr would face a barrage of pucks and keep the goals against under five most of the time.

From 1984 to '90, the Oilers won five Stanley Cups. Fuhr's save percentage in the same period was never above .890. But Fuhr won a Vézina Trophy as the league's best goaltender and one Hart Trophy as its most valuable player.

More contemporary examples are Curtis Joseph and Corey Crawford. When the Leafs signed Joseph in 1999, they instantly went from a mediocre defensive team to a scoring machine because Mats Sundin et al. knew they could linger in the offensive zone to try to get the puck back for another shot – because if they didn't, Joseph would cover for them.

Crawford was never picked to be the starting goaltender for Canada on the Olympic stage – there was always someone with a gaudier reputation – but he has two Stanley Cups with the Chicago Blackhawks.

Now in his second season with the Maple Leafs, Andersen has shown he has the talent to fit in the above company. He just lacks the consistency. Andersen can go through stretches in which he keeps the Leafs in games, but there are too many times when a big save is needed and it does not get made.

After Saturday's desultory 4-2 loss to the Philadelphia Flyers, the Leafs have now lost two games in a row for the first time this season and three of their past four. It also appears the book is out on Andersen.

During Thursday's 6-3 loss to the Carolina Hurricanes, Andersen made an eye-popping glove save from his belly on a high shot from the blueline by Canes defenceman Noah Hanifin. But he was also beaten high on two occasions. It happened two more times on Saturday when Flyer forwards Valtteri Filppula and Claude Giroux beat Andersen twice in five minutes high on the glove side.

Andersen was not enthusiastic about discussing if there was a scouting report on him in general circulation. "I don't know. Maybe," he said Saturday night.

The goaltender cannot be blamed for not wanting to discuss his flaws publicly. Who among us does? But he does need to find a solution quickly or the Leafs' four-game trip to California and St. Louis this week is going to see their hot start to the season fall apart. The onus is especially on him, because Andersen said after the Carolina loss the Leafs need to play with more pride.

"I have to stay the course and keep battling," Andersen said. "I know what I'm capable of. I'm putting in the work to be better. It's a disappointing loss, but we have to look forward and stay positive."

For their part, the Leafs had better hope this is all part of a pattern for Andersen. Last season, his first as a No. 1 goaltender in the NHL, Andersen also started slowly with a save percentage of .876 in October. Then he became one of the biggest reasons for the Leafs' success, finishing the season with a .918 mark. 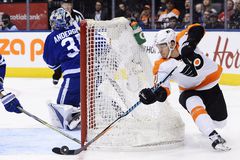 With unusual practice, Babcock looks to send a message to restive Leafs
October 27, 2017 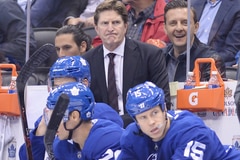 Maple Leafs can’t weather the storm in loss to the Hurricanes
October 26, 2017 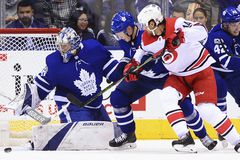