That this opening night was going to be about Auston Matthews was never in question.

After all, the team most in need – the Toronto Maple Leafs – was trusting its future to the golden hands of the NHL's No. 1 draft pick.

No one, of course, expected the soft-spoken 19-year-old American to score on his first three shots; no one saw the cascade of hats raining down in an enemy rink for the first hat trick of what should be a remarkable career; and no one really expected that he would be first star in his first game, having scored all four of Toronto's goals in a 5-4 overtime loss to the Senators.

Then again, there's always something special about opening nights.

Read more: Maple Leafs open season with one of youngest teams in NHL

Read more: The Ottawa Senators have something to prove this hockey season

There's the goofy – they were selling commemorative warm-up pucks at the Canadian Tire Centre on Wednesday evening – and then there's the endless hope: all seven Canadian NHL teams were playoff locks the moment the first puck dropped, despite all seven bottoming out last spring.

Or, as young Matthews preferred: "Don't want to think about that too much. Just go out there and play."

And so he did. The surprising ice hockey phenomenon from San Ramon, Calif. – ranked richest and safest city in America – via Scottsdale, Ariz., waited only 8 minutes 21 seconds before scoring his first by clipping in a Zach Hyman pass from behind the Ottawa net.

In a nice Tim Hortons touch, parents Brian and Ema were in the stands watching. But even prejudiced parents couldn't have imagined such a start.

The rookie's first goal came courtesy of a long stretch of stunningly sloppy hockey by the Senators – so much for learning all those new, complicated systems.

Two minutes later, the story was about the "old" – Ottawa's Bobby Ryan picking up an Erik Karlsson rebound and chipping it in past new Toronto goaltender Frederik Andersen. For Ryan, a one-time 30-goal scorer who struggled last season, it was a welcome start to what he hopes will be a more productive year.

Ryan also picked up an assist on a Karlsson blast from the point that briefly put the Senators ahead – but only briefly.

Less than two minutes after Karlsson's goal, Toronto's great white-and-blue hope stripped the puck away from a swarm of Senators, neatly pulling the puck off the boards and past Karlsson, allowing Matthews to slip down the left wing and put a puck in the short side past Ottawa goaltender Craig Anderson.

Early in the second period, he put Toronto ahead 3-2 when, astonishingly, he was left unguarded in front of the Ottawa net and had time to sign the puck before ripping a wrist shot behind Anderson.

Dozens of caps – many of them brand-new – poured down from the stands to mark the moment, however long it was to last, where Matthews took over the league scoring race.

He padded that total with only three seconds remaining in the second period when, with the game tied again after a goal by new Senator Derek Brassard, Matthews broke down ice on a two-on-one with 20-year-old William Nylander, Matthews passed, Nylander returned the puck and Matthews calmly tipped it in behind Anderson.

Ottawa tied the game again in the third period when Kyle Turris was alone in front of Andersen and Mark Stone was able to feed him the puck for a quick shot.

The chaotic game – highly-entertaining for the 17,618 fans, ulcer-causing for the coaches – was finally settled when Turris finished off a lovely tic-tac-toe passing play less than a minute into overtime with a hard slapper to the top of Andersen's net.

It was no surprise that the Toronto rookies, led by Matthews, would gain the most attention. Toronto is now the youngest team in the league and had six rookies in Wednesday's lineup.

While Matthews was the story on the scoresheet, some of the best stories on the ice concerned a wisp of a player called Mitch Marner, whose speed and puck-handling charmed the significant Leafs fans in the stands and flummoxed the Ottawa defenders.

For Ottawa fans, there was less scrutiny of who was on the ice than who was behind the bench. New head coach Boucher and his legion of assistants had driven the Senators hard in training camp. Their brains, in fact, may have been more drained than their legs with all the "systems" they were expected to have down pat – and obviously did not.

Of great curiosity to all is how Boucher, the micro-manager's micro-manager, will handle his stubborn, gifted and risk-loving captain, Karlsson.

"I always go with my players' strengths," Boucher had said earlier in the day to precisely that question.

"If you've got the best defenceman in the world, you don't want to change." 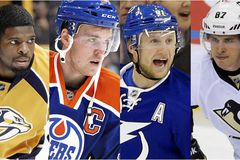