Thomas McCole's small apartment in Toronto's East End is filled with socks. Stacks of boxes stuffed with bright blue socks. Designed in Canada but made in China, new ones arrive regularly and the boxes pile up by the hundreds.

Then, sometimes one pair at a time, they're shipped all over world – with some destined for such far-flung locales like Kirkintilloch, Scotland, Orebro, Sweden, and Moonee Ponds, Australia.

And every single sock has Toronto Maple Leafs coach Mike Babcock's stern face on it.

These are Babsocks, the brainchild of two twentysomething Leafs fans who are now on a wild ride that, among other things, has enabled them to meet many of their hockey idols.

"I literally don't wear any other socks," said Jake Mednick, a program co-ordinator at a community centre who came up with the name as a joke prior to a beer-league hockey game back in September.

From then on, McCole – a marketing student at George Brown College – couldn't stop thinking about Babsocks and the possibilities.

So they paid a designer to create a cartoon stylization of Babcock's face, found a sock maker in China on Alibaba.com, and a few weeks later, the first-ever order of 100 pairs of Babsocks arrived at McCole's home. He and Mednick launched babsocks.ca in the fall, and a tweet of a picture of the socks from former Leafs-player-turned-TSN broadcaster Jeff O'Neill helped spur sales right away.

"I just thought that I cannot let this one [idea] get away," said McCole, who has dropped out of school to promote and sell Babsocks for a living. "The more it developed, the more I believed in it."

"Leafs fans are just so passionate and in love with this team," Mednick said. "And so optimistic about Babcock. They don't mind the down year [for the team]. They're still excited about the product."

The Leafs – and Babcock himself – have taken notice.

On Saturday, Toronto's American Hockey League team, the Marlies, hosted a "Babsocks Day" during their game against Utica, in which 200 discounted tickets were sold through babsocks.ca and hundreds of fans turned out in zany Babcock masks.

Babcock, meanwhile, ordered 30 pairs of the socks prior to Christmas through one of the Leafs' administrative assistants. A few pairs have even worked their way into the dressing room after McCole and Mednick gave them to Leafs players Brad Boyes and Michael Grabner at a recent event.

"It's a neat idea," Boyes said. "I think it's really clever, to be honest. For a couple guys to go out and do that, have fun, make some cash on it, it's a cool thing."

"They're just enjoying what they're doing, and I think Babs loves it, too," Grabner said.

Leafs players haven't been spotted wearing Babsocks around the Air Canada Centre, although one theorized that it might be good for their careers.

"We'll see if they're going to catch on here," Grabner added.

The overhead on Babsocks is high. Much of the purchase price currently goes to manufacturing and shipping, a process that McCole and Mednick hope to eventually streamline by finding a local producer. Getting the socks onto retail store shelves is another goal.

They have other ideas, too. One is a line of gloves with Leafs president Brendan Shanahan's face on them called "Shanahands" – they already have a few protoypes. After that could be slippers for general manager Lou Lamoriello (Uncle Lous), toques for retired captain Mats Sundin (Mats Hats) and young executive footwear for assistant GM Kyle Dubas (Du-business socks).

And Babsocks will soon be available in children's sizes.

"I think we can get bigger," Mednick said.

In the meantime, McCole and Mednick will continue to lug dozens of small packages to the courier outlet at De Arts, the local corner store, every few days. Leafs fans in Albuquerque, Tokyo and Oslo are waiting on orders, and McCole's girlfriend wouldn't mind having a bit more room in their apartment.

"Ultimately, it'd be a dream to do this full time," McCole said. "It's something that was made by the fan, for the fan." 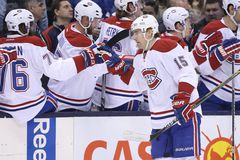 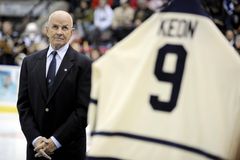