The NHL playoffs aren't yet a week old, and after a regular season where the spotlight shone squarely on concussions (and the injury statistics shot upward), the "second season" is advertising itself as one of the more ill-tempered in recent memory.

When was the last time Sidney Crosby traded punches with an opponent three times in a game?

If the postseason generally tends toward a militaristic, Old Testament ethic, it seems particularly true of this season's head-shot-happy first round.

On Saturday, the Ottawa Senators' Matt Carkner pummelled New York's Brian Boyle as retribution for Boyle targeting the much smaller Erik Karlsson's head for the punchy treatment two nights before.

"A message had to be sent," said Carkner, who was tossed from the game.

It was one of three gratuitous blows to the head on the night. Chicago's Andrew Shaw was chased from a game after clipping Phoenix goalie Mike Smith's head with his shoulder; San Jose Sharks defenceman Brent Burns tagged the Blues' Scott Nichol with an elbow to the back of the head, and teammate T.J. Galiardi incensed St. Louis centre Andy MacDonald (who has a history of concussions) when he led with his elbow on a hit that cracked MacDonald's helmet.

But the pièce de résistance came Sunday in the City of Brotherly Love; league disciplinarian Brendan Shanahan will have a lot of footage to consider, including at least a pair of head hits.

In the meantime, he doled out a one-game suspension to Carkner and three games to Hagelin, who texted an apology to Alfredsson. It's an open question whether New York coach John Tortorella will fill Hagelin's roster spot with mammoth enforcer John Scott.

Ask an NHL player about the spate of ill will and he'll tell you some variant of "it's the playoffs." As Crosby told reporters after a particularly malevolent day in Philly: "A lot of things happen out there from both sides. Everyone is guilty of it. Nobody is blaming anyone here. It's heated out there and that's what the playoffs are like."

That's not a rationale all players are on board with.

"You can't just defend everything by just saying, 'oh, it's the playoffs.' That's a mindset I don't buy into or understand," said Vancouver Canucks captain Henrik Sedin, whose brother Daniel is out with a concussion courtesy of yet another elbow. "How do I put this? In the playoffs, if you do something and you get punished, you are really going to hurt your team. In the regular season, if you do something and you get punished, the way players are punished, I don't really think it's going to hurt your team. I think if you show no respect for your opponents, then at least you're going to have a lot of respect for your teammates, and you don't want to hurt them."

The weekend's events were of a piece with the first nasty incident of the opening night of the playoffs, where the Nashville Predators' Shea Weber cupped the back of Detroit Red Wings forward Henrik Zetterberg's helmet before ramming it into the glass.

The league did dole out a suspension the next day, when Vancouver's Byron Bitz got two games for smoking the L.A. Kings' Kyle Clifford in the corner.

Take the case of Pittsburgh's Arron Asham, who has been suspended pending a disciplinary hearing for cross-checking Philadelphia's Brayden Schenn in the face and then punching him as he lay on the ice. Schenn had just taken a spirited run at the Pens' Paul Martin, running him over near the boards.

Earlier in the first period, recent concussion victims Crosby and Claude Giroux of the Philadelphia Flyers, two of the most skilled players in the NHL, briefly duked it out.

In the late stages of the game, the Pens' James Neal drilled an unsuspecting Sean Couturier with a heavy shoulder check; the rookie had to be helped from the ice.

Then Neal hit Giroux, and shortly thereafter Crosby found himself tussling with Philly's Scott Hartnell, touching off a melee and a torrent of sticks and gloves hitting the ice.

The teams combined for 148 minutes in penalties and six misconducts.

The Philadelphia-Pittsburgh series has an overabundance of bad blood, and it has also exhibited a trend that worries critics of the league's policy on hits to the head.

Hall of Fame goaltender Ken Dryden said that beyond the individual incidents, the real danger is ending up with an atmosphere where "it's not just goon for goon, it's head shot for head shot – that would be fundamentally different."

At issue is whether the league is truly serious about ridding the game of head shots.

One immediate way to address the issue, Dryden suggested, is more clarity from Shanahan. 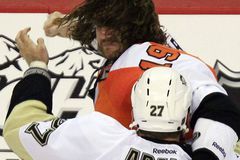 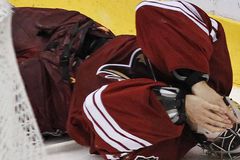 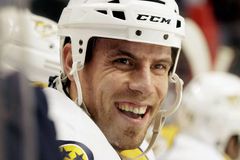 Follow Sean Gordon and Eric Duhatschek on Twitter @MrSeanGordon @eduhatschek
Report an error Editorial code of conduct
Due to technical reasons, we have temporarily removed commenting from our articles. We hope to have this fixed soon. Thank you for your patience. If you are looking to give feedback on our new site, please send it along to feedback@globeandmail.com. If you want to write a letter to the editor, please forward to letters@globeandmail.com.
Comments