While projected top draft pick Connor McDavid remains off the ice with a broken right hand, the NHL's race to last place is going strong a quarter of the way through the season.

And it's not quite playing out as everyone expected.

The Buffalo Sabres went off-script as one of the hottest teams in the league, while a stunningly poor start has put the Columbus Blue Jackets in the driver's seat to get the best odds of landing the first-overall draft pick.

Columbus has been beset by injuries to goaltender Sergei Bobrovsky, centre Brandon Dubinsky, forward Mark Letstu and defencemen Fedor Tyutin and Ryan Murray (among others) and has fallen to 6-15-2 with an NHL-worst 14 points. But as recently as the general managers meeting in mid-November, Jarmo Kekalainen said he didn't believe the season was lost.

"I hope the pace (of injuries) goes down a little bit," Kekalainen said. "Hopefully we can ramp it up here and get back healthy and playing the way we want to play."

Last in the league in goals-against per game, the Blue Jackets are far away from that. Behind Jack Johnson and James Wisniewski, their blue-line has become a mish-mash of defencemen like Tim Erixon, David Savard, Dalton Prout, Jordan Leopold and Kevin Connauton.

Mediocre defence is a common theme among the bottom five teams in the NHL standings. Along with the Blue Jackets, the Edmonton Oilers, Sabres, Carolina Hurricanes and Philadelphia Flyers have all struggled in that department.

Edmonton has lost nine straight games (two of them in overtime) and look like a lock to pick in the top 10 for the seventh straight year.

"This is an extremely hard and tough situation for everybody in our organization, from the players to the coaches to the managers," embattled coach Dallas Eakins said after Friday's overtime loss in St. Louis. "It is hard and it is painful, and somewhere you have to believe that this is going to make you extremely resilient and tough down the road."

The Oilers already have three recent first-overall picks on their roster in Taylor Hall, Ryan Nugent-Hopkins and Nail Yakupov and at this point will have more than a few ping-pong balls to get a fourth in McDavid.

Inconsistent goaltending from Ben Scrivens and Viktor Fasth hasn't been helped by underachieving play from young defencemen Justin Schultz and Nikita Nikitin, who were counted on to play difficult, top-four minutes.

After starting the season 3-12-2, the Sabres have won five of their past six games including each side of a back-to-back against the Montreal Canadiens. Fans in Buffalo would welcome McDavid or Boston University centre Jack Eichel with rebuilding in full swing, but a little winning could go a long way for the Sabres' core.

"We need to keep building on those breaks and stay positive here," goaltender Jhonas Enroth said.

In Carolina, Jordan Staal replacement Riley Nash has been a pleasant surprise, but Alex Semin has been so much of a disappointment that the winger in the second season of a US$35-million, five-year contract has been a healthy scratch. Expectations were low in Raleigh just as they are in Buffalo, so first-year GM Ron Francis and rookie coach Bill Peters can spend this season trying to build a system and a culture.

The Flyers don't have such a luxury and have dug themselves a deep hole by losing eight of their past nine, seven of them in regulation.

"This is a better team than we're playing right now and that our record is showing," Flyers general manager Ron Hextall said after Friday's home loss to the New York Rangers. "We have to get going, no doubt about it. I'm not happy with our record and our overall performance."

Absent top-liners Claude Giroux and Jake Voracek, who are having all-star seasons, Philadelphia has lacked offence and Michael Del Zotto has incredibly been the best piece of a defence missing Kimmo Timonen.

And it could get worse before it gets better with the Flyers out West to face the San Jose Sharks, Anaheim Ducks and Los Angeles Kings this week.

Under the 2014-15 format, the highest-ranked team to miss the playoffs will have double the chance of getting the No. 1 pick, even though the odds are just 1 per cent. 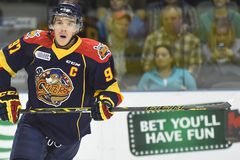 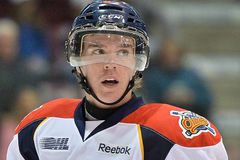