There will be a solemn ceremony in Ottawa Wednesday morning.

At the TSN 1200 radio headquarters downtown in the ByWard Market, they will officially retire the clip that, each day, brings the morning talk show to an end.

It features the voice of National Hockey League forward Scott Hartnell and was picked up when Hartnell was wearing a microphone during the All-Star Game held in Ottawa four years ago.

Hartnell's team had just scored, and as he skated by the players benches, he leaned toward a member of the other team and growled: "Suck it, Phaneuf!"

Dion Phaneuf – the captain of the Toronto Maple Leafs who only last Saturday was roundly booed every time he touched the puck during an Ottawa match between his Leafs and the Senators – is now himself an Ottawa Senator.

Finally, if the off-season counts, Ottawa has a Senator who actually lives in PEI, for that is where Phaneuf's parents came from and it's where he summers.

In a nine-player swap that caught the hockey world off guard – and had fans in both Ottawa and Toronto cheering – Phaneuf, defence prospect Cody Donaghey and forwards Matt Frattin and Casey Bailey moved from the Leafs to the Senators in exchange for defenceman Jared Cowen, forwards Colin Greening, Milan Michalek and Tobias Lindberg, along with a second-round pick in the 2017 draft.

In its simplest terms, it was a swapping of defensive whipping boys – Phaneuf in Toronto, Cowen in Ottawa – by two mightily struggling teams.

In financial terms, it was rather more complicated. The teams do not retain any salary commitments to the players they sent off, so in the long-term, Ottawa takes on millions extra since Phaneuf's $7-million (all figures U.S.) annual salary-cap hit runs through 2020-21.

For two teams that have been fighting the Battle of Ontario now for more than a decade, this deal amounted to a truce of a sort.

Toronto general manager Lou Lamoriello took two problem contracts off the hands of Ottawa general manager Bryan Murray. Cowen, 25, is a former first-round draft pick (ninth over all in 2009) who has steadily worsened since his rookie season; this year he's been a healthy scratch for long stretches. He will earn $3.1-million this season and next. Greening, a super-fit forward who never fit in at the top level, is a minor-leaguer making $2.65-million.

Both contracts were considered impossible to move until Ottawa agreed, in exchange, to take Phaneuf's deal off the Leafs' salary cap – perhaps leading to a future opportunity for Toronto to take on an elite unrestricted free agent such as Steven Stamkos of the Tampa Bay Lightning.

The Leafs do get one bona fide NHLer in the deal in Michalek, a dependable checking forward who earns $4-million a season, but is currently sidelined with a broken finger.

Murray said that the deal was "about hockey" for him, not about money. He and Lamoriello had been discussing the possibilities of a trade for some time, but it was only on the weekend that the talks turned "serious." Murray conceded that the financials had to work for both sides.

"If you make a trade that satisfies your needs," said Murray, "you can't worry about the other team."

The 30-year-old Phaneuf was Calgary's first pick in the 2003 draft, and he excelled for the Flames. In 2010, the Leafs and Flames struck a seven-player deal that brought the six-foot-three, 227-pound defenceman to Toronto, where he quickly became team captain and slowly became a target for fan disenchantment.

Phaneuf may have made less of an impression on the city of Toronto as any captain in Leafs' history. And some of what impression he did make was bad. It was under Phaneuf's leadership that the team ingloriously refused to "salute" fans after a game they had won. He had become increasingly unpopular with the Leafs' fan base.

Phaneuf told Murray that he was "excited" to be coming to Ottawa, but he will be coming in with the season more than half over. Shifting loyalties at such a time is not a simple matter, said Matt Stajan, the Calgary Flames centre who was part of the seven-player deal for Phaneuf six years ago.

"It's probably the weirdest thing you'll ever have to go through if you ever get traded mid-season," said Stajan. "Literally, you are in the locker room with 23 guys one day and then the next day, you're in a locker room with 23 completely different guys.

"That's just at the rink. Then you've got the outside world, which has totally changed for you as well. It's tough, but it's part of what we do. There's no right answer. Everybody goes about it their own way."

Murray believes that Phaneuf will adjust easily and that there is still good mileage to be had out of his expensive acquisition. Phaneuf has 120 goals and 304 assists in 801 career games. He is a three-time All-Star and was a finalist for the Norris Trophy as the league's best defenceman in 2007-08. He may have slowed in a game increasingly turning toward speed, but he retains a powerful shot from the point and, even diminished, would bolster Ottawa's weaker left side on defence.

"You hear all the time that we're dreadful in our own end," said Murray. "He'll bring a presence to our organization."

Ottawa's defence is led by 25-year-old Karlsson, the reigning Norris Trophy winner. He is a right-hand shot, but he and Phaneuf may only see ice time together on the power play. Phaneuf is expected to be paired with 22-year-old Cody Ceci and is expected to dress for the Senators' Wednesday evening game in Detroit against the Red Wings.

The Senators desperately need help in their own end – they have allowed 170 goals against, tied with Columbus for the worst record in the Eastern Conference.

However, with 56 points, they are only four points away from the final wild-card playoff spot, and have 28 games left. Last year the team went on a miraculous late-season surge to squeak into the playoffs.

With files from James Mirtle in Toronto and Eric Duhatschek in Calgary.

Leafs pull off the impossible, send Dion Phaneuf and his contract to Senators
February 9, 2016 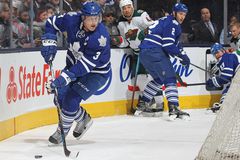 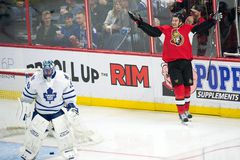 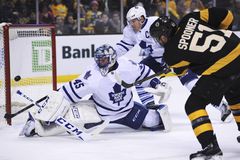 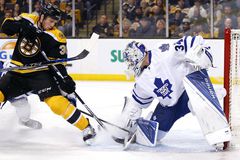 Why Steven Stamkos will likely bolt from the Tampa Bay Lightning
December 13, 2015 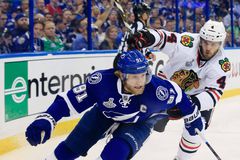