Ed Belfour would have only been 7 when Vladislav Tretiak became a household name in Canada with his superlative performance in the historic Summit Series in 1972.

Growing up in Carman, Man., when the neighbourhood kids would gather for exuberant games of pick-up hockey, more often than not Belfour would assume the persona of the great Russian netminder.

"Vladislav was one of my childhood heroes," Belfour said. "Growing up in Canada playing for the Stanley Cup on the street everyday, everyone wanted to be ... Tony Esposito or Vladislav Tretiak."

It could be said that Belfour took that infatuation to the extreme, rising to become one of the great National Hockey League goaltenders of his generation.

Belfour, now 46, was among four players who were inducted into the Hockey Hall of Fame in Toronto on Monday night.

Belfour was joined by Doug Gilmour, Joe Nieuwendyk and Mark Howe as the other former players to be welcomed into the Hall with Howe joining his father, Gordie, as the fourth father-and-son pair so honoured.

"It is hard to put into words what this means to me," said Belfour.

Nieuwendyk won Stanley Cups with the Calgary Flames, the Dallas Stars and the New Jersey Devils during a career that spanned 20 years.

Surprisingly, the Whitby, Ont., native said playing one season with the Leafs in 2003-04 was what stood out for him.

"Growing up 40 minutes down the road here in Whitby it was probably the highlight of my career," said Nieuwendyk, now the general manager in Dallas. "And I say that with all sincerity.

"Growing up a Leaf fan, Borje Salming and Lanny McDonald, that's why this weekend has been so special."

Earlier in the day the four inductees received their member rings at the Hall, an event that the laid-back Belfour said he had to buy a suit for.

"I'm more of a country guy now," said Belfour, who bears a striking resemblance to Hollywood actor Russell Crowe. "I wear my plaid shirts and jeans and cowboy boots still."

When attired in the comfort of his goaltending equipment during his playing days, you'd be hard pressed to find a goaltender who played with more desire and athleticism than Belfour.

Belfour played from 1988 to 2007, winning a Stanley Cup in 1999 as a member of the Dallas Stars. A two-time Vezina trophy winner as the league's top goalie, Belfour also won a gold medal representing Canada at the 2002 Winter Olympics.

Over the course of his career, Belfour played 963 NHL games, winning 484 (third on the NHL's all-time list) with a 2.50 goals-against average.

On his website, Belfour lists Tretiak as one of the most influential people of his life and he got the opportunity to meet the Russian in person prior to the start of the 1990-91 NHL season when Belfour was in his second NHL season with the Chicago Blackhawks.

That was when Belfour learned that Chicago coach and general manager Mike Keenan had hired Tretiak to become the team's goalie coach – even though the Russian couldn't speak a lick of English.

"We had an interpreter but through body language I knew what he wanted me to do," Belfour said. "He'd put the pads on and go out on the ice with us.

"In fact, he had the pads on in practice one day and nobody could score on him. And Keenan wanted to start him. But he turned it down and said this is Eddie's time. I'm still thankful for that, too."

Tears of joy for Gordie Howe as son joins him in the Hockey Hall of Fame
November 14, 2011 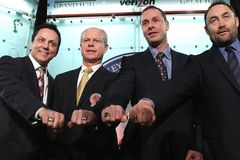 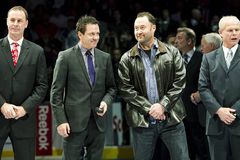 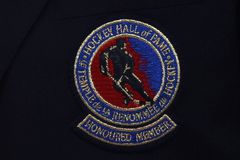