Miikka Kiprusoff had just announced his retirement after a decade-long run in Calgary and it would be up to Berra and Ramo to fill the void.

It was a tall order and the Flames struggled at the start of the season. But there finally appear to be signs that the team may be ready to turn things around.

Berra and Ramo have helped Calgary to a 5-4-2 record in its last 11 games, with three losses coming in close games against league heavyweights Pittsburgh and Boston. Berra entered the holiday break on a high after helping the Flames to a 4-3 shootout win Monday over the surging St. Louis Blues.

He made 32 saves and stopped all three shots in the shootout to improve to 5-8-2 on the season. Berra is also a perfect 3-0 in shootouts, an area in which Kiprusoff historically struggled (23-37).

"I want to have more wins but sometimes you can't control that."

Once described by former Flames general manager Jay Feaster as the "best goaltenders not playing in the NHL," Berra and Ramo are still adjusting to the league since coming over from Europe. The ice surface is smaller and there is more traffic in front of the net.

"One thing I've been working on is trying to track the puck and follow it with my body," said Berra. "Also, guys here shoot perfect shots so you can't just go down and hope it hits you, you have to read the shot. That's a big part of where I'm way better than at the start of the season.

"I can read the shots and where they're coming."

Ramo, who spent the last four seasons in the KHL, is more familiar with the North American game than his teammate. The 27-year-old native of Asikkala, Finland spent three seasons in the Tampa Bay organization after being selected by the Lightning in the sixth round of the 2004 entry draft.

"I'm trying to be quicker with my positioning so I can get set and see more pucks," said Ramo. "If you can play a little bit more outside the crease and still be quick, that's always better.

Berra, a 26-year-old native of Bulach, Switzerland, said he has also noticed a big difference in the number of blocked shots. One of the trademarks of the Flames' blue-collar style of play, Calgary has blocked 688 shots this season, second only to Montreal (725).

"I think the guys would jump face first into shots, they have so much commitment to the Flames," Berra said with a laugh. "They play like a goalie. Sometimes if there's not many shots, it's hard to get into the game and I'll be thinking, 'Hey, let it through, I want to save something too."'

Flames coach Bob Hartley has been pleased with how his two goaltenders have improved.

"Very happy with their progression," Hartley said. "They're two great guys. They want to learn, they want to contribute to the team success. They get along great together. We're trying to give them streaks where if they play well, we ride them."

Berra started 11 of 12 games in one stretch, starting with a spectacular 42-save win in his NHL debut in Chicago.

Lately it's been Ramo's turn, as he has started eight of the last 12 and is playing his finest hockey of the year. He's gone 4-2-2 in that span with a 2.06 goals-against average and .925 save percentage.

He attended Finland's Olympic orientation in July, but thinks there is little chance he'll be in Sochi this February given the country's depth at the goaltending position.

It's unclear if Nashville netminder Pekka Rinne will be ready for the Games as he's still recovering from a hip infection. However, Finland is still loaded with other options, including Boston's Tuukka Rask, San Jose's Antti Niemi and Kari Lehtonen of Dallas.

"With Finland and the goalies, pretty easy decisions for the people who are selecting," said Ramo. "They've been well known for so long in Finland and played in the NHL for so long and have been so good."

It's a different scenario for Berra. After a strong showing last May at the world championships, he fully expects to be in the mix on the Swiss team.

"For sure," Berra said. "Plus I've made my next step personally by now playing in the NHL."

The Flames, who sit 11 points out of a playoff spot in the Western Conference, return to action Friday against the visiting Edmonton Oilers. 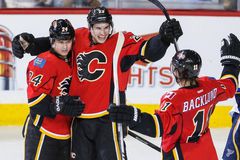 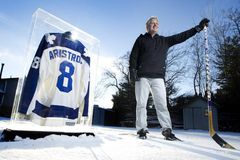