A financial reward was promised to Todd Bertuzzi when he agreed to drop his third-party lawsuit against former Vancouver Canucks head coach Marc Crawford as part of his court battle with former NHL player Steve Moore.

That was revealed by Ontario Superior Court of Justice Master Ronald Dash during a hearing Monday but Dash reserved a decision about whether Moore's lawyers could study the agreement. Tim Danson, who is representing Moore in a $38-million lawsuit against Bertuzzi and Orca Bay Sports and Entertainment, which owns the Canucks, argued that any financial incentive for Bertuzzi could "change the landscape" of his litigation strategy.

Dash did not reveal the amount of the financial consideration or whether it was a straight cash payment to Bertuzzi, who is personally on the hook for damages, or based on a percentage of damages awarded by the jury. The agreement involves Bertuzzi and Orca Bay, the two remaining defendants in the lawsuit.

Moore is suing Bertuzzi and the Canucks for an attack on Mar. 8, 2004, during a game between the Canucks and the Colorado Avalanche. Bertuzzi's attack left Moore with broken vertebra and a concussion and ended his NHL career. Moore is seeking damages for the loss of his NHL income and future income. Danson said those damages could reach $40-million when the case goes to trial in the fall.

The agreement to drop the third-party action against Crawford also involves Orca Bay, and Danson told the court this now means both defendants, who previously had an adversarial position with each other when it came to liability, are now lined up against Moore. Danson said this will have an impact on the testimony of Bertuzzi and Crawford as well as his ability to produce witnesses, such as Bertuzzi's former teammates.

Dash seemed skeptical of Danson's argument that the agreement forces him to change his strategy for trial. But when Danson said Bertuzzi and Orca Bay cannot argue they were never at odds over the outcome of the case because they argued as much in an earlier hearing when they successfully received the right to conduct two separate neuropsychological examinations of Moore, Dash said, "That's an interesting point."

Danson said Bertuzzi's third-party claim against Crawford stated the coach called for one of the Canucks players to attack Moore in retaliation for a hit he made on Canucks star Markus Naslund in an earlier game. Danson said Bertuzzi would have been able to ask former teammates to support him in court but now that he reached an agreement about Crawford those witnesses will not be called. Danson said he does not have the ability to bring those players to court.

"It has a huge impact on us," Danson said. "We don't have access to what was said in the dressing room."

Danson brought up the fact Orca Bay and Bertuzzi also agreed to drop cross-claims against each other for damages if Moore prevails as evidence they are now working together against his client.

Both D'Silva and John Adair, Bertuzzi's lawyer, argued that the agreement will not change any of Bertuzzi's or Crawford's testimony. And if either changes his testimony from what was said during examinations of discovery, Danson can go after them on cross-examination.

D'Silva told the court, "It is not uncommon for defendants to counter-claim against each other and then dismiss." He also said neither he nor Adair are in any better position than Danson to compel any of Bertuzzi's former teammates to testify.

Adair said settlement agreements should remain privileged information in most cases so the parties are able to "hold discussions and come to an agreement."

Dash did not say when he will issue a decision on Danson's motion.

There are also two other matters for Dash to consider. Danson said both of the neuropsychological exams conducted on Moore by doctors for Orca Bay and Bertuzzi violated the guidelines established by the court. And Danson may seek a court order to compel Orca Bay to produce additional video footage of the Mar. 8, 2004 game. D'Silva said the company is searching for the material and will provide it when it is found. 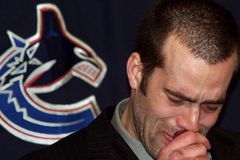 Steve Moore finally gets his day in court
September 14, 2011 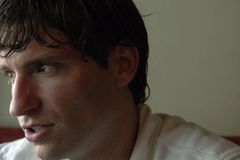