Midway through the third period of the deciding game against the Tampa Bay Lightning last Friday, Boston Bruins defenceman Andrew Ference lugged the puck out of his own zone and took a quick peek ahead. Tampa had fallen back into its patented 1-3-1 defensive system, which had been perplexing opponents all season long and through the playoffs.

So rather than do what everyone had done so unsuccessfully - dump the puck in, right onto the stick of a waiting Tampa defencemen - Ference dished off to centre David Krejci, pushing everything down the left side of the ice. Krejci took the zone with a little speed - how old school can you get? - and eventually slipped a pass through to teammate Nathan Horton, who'd found a seam between the Tampa defenders to tip in the only goal in a 1-0 victory.

In a series that had previously featured two defensive teams playing defence badly, it was Boston's ability to change and adapt in Game 7 of the Eastern Conference final that ultimately put it into the Stanley Cup final against the Vancouver Canucks.

Once upon a time, the Bruins were known as a generic trap team. And make no mistake about it, when protecting a lead, they can fall back with the best of them. But under coach Claude Julien, the Bruins are also one of the more adaptable teams in the league, able to play a variety of styles within a single game.

Julien made the point Monday, just before his team arrived here to prepare for the Cup final opener against the Canucks. He took issue with the idea that the Bruins only possess a smothering defensive style. He's sometimes labelled as a defensive coach, even though the Bruins were one of the top scoring teams in the NHL in two of the past three seasons.

In a perfect world, the Bruins would play a lot of dump-and-chase because they have the sort of forwards that can get in hard on the fore-check and retrieve loose pucks. It is a style that made them the NHL's most successful even-strength team in the regular season (they are a plus-20 in the postseason as well). But the mobility of Vancouver's defence crew is also its strong suit, meaning the Canucks are theoretically positioned to handle the Bruins' fore-checking pressure better than any opponent Boston has faced thus far in this postseason.

That game within the game - Boston forwards coming after them hard, Vancouver's defence smoothly turning the play back up the ice - will in large part determine which of the two finalists eventually carry off the Stanley Cup.

"Definitely, we have to be as clean as possible on our breakouts," Canucks defenceman Christian Ehrhoff said. "They are a very strong and physical team, so we've got to get ready for that."

Boston's style can vary from line to line. Krejci is a good puck distributor, so the Bruins play more of a possession game when his unit is on the ice. Chris Kelly's line, usually cast in a defensive role, will give up the puck more freely and then try to retrieve it. And Patrice Bergeron, last seen in these parts as the 13th forward on Canada's 2010 Olympic team, is one of the NHL's most accomplished two-way centres, combining heads-up defensive presence and strong work in the faceoff circle with sneaky good hands. Julien compared Bergeron's multidimensional contributions for Boston to those of Ryan Kesler with the Canucks.

Vancouver left winger Chris Higgins spent most of the year playing in the East and thus is more familiar with the Bruins' style than the vast majority of his teammates. "They're definitely good at [dump-and-chase]" Higgins said. "That's definitely a make-up of some of their players - big, strong guys that protect the puck well and are good on the fore-check. It's certainly going to be a challenge for our D [defence]to get those break-out pucks and make a good first pass, but that's the sign of a good team. If you're coming out of your zone easy, it's an easier game to play and creates more offensive opportunities for you. Hopefully, we're able to do that."

Julien has been put in the awkward position of having to defend his record and his tactics throughout these playoffs, especially after the Bruins fell behind 2-0 to the Montreal Canadiens in the opening round. On the eve of the Stanley Cup final, he was still at it - even though he's had the last word for most of the past six weeks.

"The success we've been getting lately is making people happy," Julien said. "So at the end of the day, it's all about winning, right? If you're winning, people are happy. So that's what we're trying to do here." 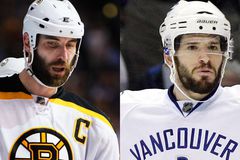 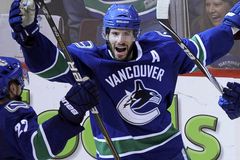 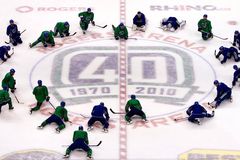