Brad Marchand added a power-play goal in the third period, David Krejci had an empty-netter and Patrice Bergeron had two assists for Boston, which posted its second win over the Canadiens in five days. The teams meet again in Montreal on Saturday night.

Julien, who coached Boston's Stanley Cup-winning team in 2011, was fired last Feb. 7 in his 10th season. He was replaced by assistant and current Bruins coach Bruce Cassidy, who opted for more up-tempo, charge-into-the-zone play from his defencemen as opposed to Julien's mostly defensive-minded style.

Rask extended his career-best point streak to 15 games (13-0-2), including a 4-3 shootout win at Montreal last Saturday.

Trailing 1-0, Boston tied it 6:50 into the first when Pastrnak took a pass from Bergeron at the bottom of the left circle and slipped a wrister behind Price.

The Bruins took the lead early in the second when Spooner's backhander from just outside the crease caromed into the net off the right skate of Montreal winger Jonathan Drouin.

Montreal had a two-man power-play advantage for 69 seconds midway into the second — immediately after Rask made a pad-stop on Drouin's clean break in — but Boston limited the Canadiens' shots to mostly lower-percentage chances from the outside.

Jerabek's shot from the left point found its way through a group of players in front and slipped into the net 31 seconds into the game.

NOTES: Julien got a brief ovation during a video tribute midway into the opening period, but the crowd's chance for prolonged applause was drowned out by loud music until the next faceoff. ... Willie O'Ree, 82, was honoured in a ceremonial puck drop before the game, commemorating the 60th anniversary that he became the first black player to play in an NHL game. He was with Boston and played at Montreal. ... Boston D Kevan Miller was out sick and Adam McQuaid took his spot, returning after missing 36 games with a broken leg. McQuaid had been healthy for a few weeks, but unable to crack the lineup. ... It was the 740th regular season meeting between the rivals.

Canadiens: At the Washington Capitals on Friday.

Bruins: At the New York Islanders on Thursday.

Leafs give up late goal, lose to Blues in overtime 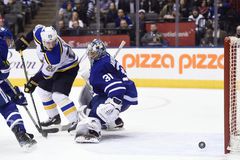 Two big changes we might see from the Leafs this season 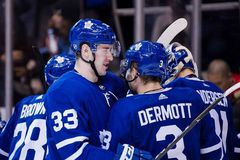