The Pittsburgh Penguins went out with a whimper.

Aside from a few moments, there was little bite from the NHL's best offensive team even if Sidney Crosby played better, and the Penguins' shocking collapse was completed by a 1-0 win by the Boston Bruins, who swept them in four consecutive games. The NHL's Eastern Conference final winners will now advance to their second Stanley Cup final in three years next week against either the Chicago Blackhawks or the Los Angeles Kings.

The Penguins were done in by their inability to cash in on their scoring chances but most of all by one of the great goaltending displays in NHL playoff history. Tuukka Rask backed up by an airtight defence led by Zdeno Chara, who smothered the Penguins' last gasp, a shot by Evgeni Malkin, in the dying seconds. Rask, the current favourite to win the Conn Smythe Trophy as the most valuable player of the playoffs, registered his third shutout of the series.

Rask's numbers are astonishing. In holding the NHL's best offence (3.38 goals per game in the regular season) to a mere two goals over four games, Rask had a save percentage of .985 in the series and a goals-against average of 0.44.

Neither Crosby nor Malkin was able to get so much as a point off him. Neither could James Neal, Jarome Iginla or Kris Letang.

"There's no question the performance he put in in this series was unique," Penguins head coach Dan Bylsma said. "He was the difference in the series. It's not like we didn't have good opportunities."

When faced with questions about their inability to break through the Bruins unforgiving defensive game, the Penguins insisted throughout the series they were getting enough chances to win. They outshot the Bruins 26-24 Friday, although the Penguins were held to six shots in the third period and again were guilty of blowing chances by missing the net (15 times on Friday), mishandling rebounds and by making mental errors.

"We were getting in on the fore-check, getting chances, getting shots," Neal insisted. "In the last two games we just couldn't find a goal. You've got to put it by the goalie. The goalie made some great saves.

Five minutes into the third period, the Penguins paid for their inability to seize the opportunities they were given earlier in the game when they fell victim to yet another mental lapse. Brad Marchand carried the puck down the left side and just over the Pittsburgh blue line and slammed on the brakes, causing the Penguins defender to fall and slide away from him. At the same time, no one picked up Boston defenceman Adam McQuaid, who jumped into the rush late as the trailer.

Marchand slipped the puck to McQuaid as he cruised into the slot at full speed. He stepped into a slap shot and wired the puck into the top corner, setting off an explosion of sound from the 17,565 fans at TD Garden Arena.

"It feels good to be able to contribute that way when you don't normally," said McQuaid of his second goal of the playoffs. "But I think you look at so many great efforts we had from guys. The last 10 minutes of the game, guys were all over the ice, doing whatever it took to preserve that goal. You know, [Rask] was phenomenal again for us."

It was a familiar story in this series for the Penguins. Once again they paid the price for too many mental errors and some of the worst shooting ever seen in a playoff series by a team that was supposed to be the terror of NHL goalies.

Both teams showed the effects of the double-overtime game on Wednesday through the first half of the game. There was little of the frantic intensity of Game 3 Friday night, as the pace was much slower through the first 30 minutes or so.

Things picked up a bit in the last half of the second period but once again both goalies were sharp as the score remained 0-0 at the start of the third. However, if the Penguins could have stopped themselves from sabotaging one or two of the breaks that finally went their way they might have taken the lead for the first time in the series.

The Penguins controlled the play for the first five minutes of the game and for several stretches in the second period, as Crosby played his best sustained hockey of the series. But they kept shooting themselves in the feet.

The Penguins' power play also continued to misfire, stalling on three opportunities, which brought them to 0-for-15 in the series. This isn't to say the Bruins are any better in that department, of course. They, too, failed on three chances and were also without a power-play goal in this series (0-for-13).

"They're solid. They make you earn your chances. That being said, I don't feel they totally shut us down. I feel we got chances but Rask shut us down," said Crosby, who also said his only ill effect from a hard first-period collision with Bruins forward Daniel Paille was having the wind knocked out of him.

Pittsburgh steels itself for changes
June 7, 2013 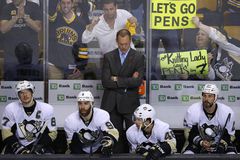 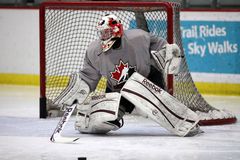 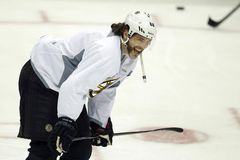 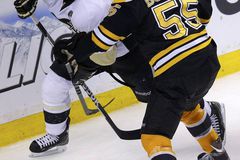 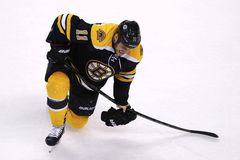 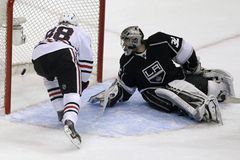 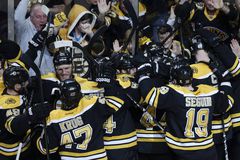