The Pittsburgh Penguins finally showed that patience against the Boston Bruins they've been talking about only to see the game, and probably the NHL's Eastern Conference final, slip away in overtime.

Because no matter how well you play in two periods or three in regulation time, there is no justice in the calamity that is NHL playoff overtime. That's why they call it sudden-death, not sudden-victory.

After dominating the Bruins over the last two periods of regulation time, the Penguins began to hit the ropes. They had their chances – two power plays and a hit goal post in overtime – and survived two overtime Boston power plays but the end came at 15:19 of the second overtime period when centre Patrice Bergeron scored for a 2-1 Bruins win, despite the fact they were outshot 54-40 over 95 minutes and 19 seconds of hockey. That leaves the Penguins hanging by a thread with the Bruins up 3-0 in the best-of-seven series they were supposed to win.

"That's the playoffs," said Penguins superstar Sidney Crosby, who came close but not close enough to finally outplaying Bergeron in this series. "That's how it works sometimes. Unfortunately, tonight I thought we deserved better but they found a way to get that big one in overtime."

It was the cruelest kind of blow, too, as the catalyst on the play was 41-year-old Jaromir Jagr, the only player on the ice who was in the epic 1991 conference final when the Penguins came back from a 2-0 deficit to beat the Bruins, only he was a Penguins rookie then with a bitter parting from the team and the city to come later. Also in on the goal was Brad Marchand, the Bruins pest who is hated by every team he plays against and, finally, Bergeron, the Crosby killer.

The play started when Jagr lost the puck along the boards in the Pittsburgh end to Evgeni Malkin, who was finally a force for the Penguins in this game. But Jagr got it back before Malkin could clear the puck and moved it to Marchand, who spotted Bergeron in the slot.

Up to then, Bergeron had finally started losing the coverage battle to Crosby, who was not quite as dynamic as Malkin but got better as the game went on. Crosby and the other Penguins forwards were even winning the faceoff battles. By the end of the game, Crosby had beaten Bergeron on one to set up the Penguins' goal in the second period and won 21 of 38 while Bergeron had won only 13 of 35.

But, as Bergeron said afterward, "we found a way."

He found it by taking Marchand's pass with Penguins defenceman Brooks Orpik draped all over him and redirected it behind goaltender Tomas Vokoun, who had been just as impenetrable as his Bruins counterpart Tuukka Rask to that point.

"It wasn't our best effort in the first 60 [minutes] but we regrouped well in overtime," Bergeron said. "You have to find a way somehow but I guess we did in the second overtime."

Given how the 60 minutes of regulation time went, it was a bitter, stunning blow for the Penguins. They finally stuck with their game plan and kept hammering away at the Bruins despite being turned away by their defence and Rask and deserved a better fate, at least on this night.

Now, Bylsma said, the only thing to do is "do that right again," on Friday night in Game 4 to stay alive.

"We planned on winning Game 4 as well and now we're going to regroup and get back and play just like that again and win one hockey game," Bylsma said.

The promised lineup changes by Bylsma were relatively minor – Jarome Iginla was moved to right wing on the third line, with Matt Cooke moving up to Malkin's line and rookie Beau Bennett replaced veteran forward Jussi Jokinen. But the change in attitude was major – especially when it came to Malkin.

He was easily the best Pittsburgh skater as the Penguins took over the play in the second and third periods, outshooting the Bruins 29-15 in that stretch. But Rask once again was up to the challenge and they wound up in overtime.

The tremendous hockey game everyone had been expecting in this series finally broke out in the second period after the Bruins again dominated the first one. But this time the Penguins showed some resilience in coming back hard in the second period to tie the score 1-1 heading into the third.

After losing the first two games by a combined score of 9-1, the Penguins talked a lot about the need to stay patient and stick with their game plan. In other words, keep trying to fire the puck deep into the offensive zone, fore-check to get it back and then cycle it along the end boards until you can get an opening in front of the net.

The trouble is, the Bruins' defensive system is designed to frustrate that sort of thing and their players are masters at carrying it out. They don't mind giving up the first shot as long as it's coming from the perimeter. Opponents can blast away from there all they like as long as Rask can see the shot.

But second and third chances from in front of the net from rebounds and bouncing pucks are strictly taboo. Zdeno Chara, Dennis Seidenberg and the rest of the Bruins defencemen form a wall in front of Rask to sweep away rebounds, knock down bodies near the net and get their sticks in the way of any passes.

After repeated futile attempts to get through this prickly forest in the first two games, the Penguins fell into the trap of trying to stickhandle their way in individually, which played right into Boston's hands. Those solo efforts became turnovers more often than not, which were scooped up by the Bruins, who thrive on the counter-attack, for odd-man rushes the other way.

The way the game started, it looked like this going to be the story for a shocking third consecutive game. Once again, the Bruins struck quickly thanks to a Penguins miscue and little bit of luck.

A shot by Bruins centre David Krejci, yes, him again, hit the inside of Penguins defenceman Matt Niskanen's left skate and deflected into the net between Vokoun's pads. It was just 28 seconds into the game, and all present and millions more watching on television, thought here we go again. But this time the Penguins managed to hang on.

In the second period the Penguins began to control the puck in the Bruins' zone. They also turned things around in the faceoff circle, finishing with 37 wins against 19 losses in regulation time. This did not produce any second or third scoring chances but this time the Penguins kept plugging away. The result was a highly entertaining ebb and flow of Penguins strikes, Bruins counter-attacks and great goaltending.

The Penguins finally got a break midway through the period when Crosby managed a rare faceoff win against Patrice Bergeron in Boston's end. The puck wound up with Chris Kunitz, who ripped a shot past Rask at 8:51 to create a sigh of relief that went from the Penguins all the way through their fans.

But the next goal would never come, despite the fact the Penguins went hard at the Bruins in the third period. This has not been a good series for power plays, as neither team has scored with the man-advantage. But the problem is especially acute with the Penguins, who went 0-for-6 Wednesday night despite the firepower at their disposal.

The Bruins are taking motivation from their penalty killers, such as in the second when forward Gregory Campbell blocked a shot and suffered a leg injury but stayed on the ice until the whistle almost a minute later. Campbell is thought to have suffered a broken leg and is finished for the playoffs, but his teammates are grateful for his effort.

"He's a man who does whatever the team needs," Chara said. "He's willing to sacrifice his body and for sure it was an outstanding block by him." 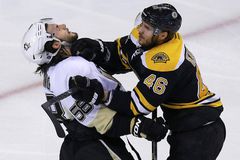 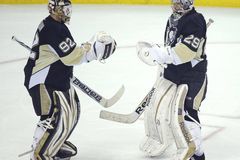 Crosby at centre of any potential Penguins comeback
June 4, 2013 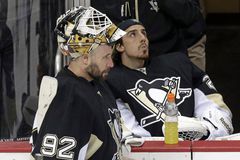 Maki: Kings are on the ropes while temperature rises between Pens and Bruins
June 3, 2013