The Pittsburgh Penguins and their fans have seen this movie before. So, it appears, did the Boston Bruins. And it's not a happy ending for the Penguins.

A little more than a year ago, the Penguins' cross-state rivals, the Philadelphia Flyers, knocked them out of the first round of the NHL playoffs by subjecting Sidney Crosby, Evgeni Malkin and company to a physical assault to cope with their speed. The result was a Flyers win in six games.

The Bruins employed the same tactics in the Eastern Conference final opener Saturday night at the Consol Energy Center, weathered a first-half storm and came away with a 3-0 win to the shock of 18,628 Penguins fans. The Penguins lost their cool at the end of the second period as Malkin got into a fight and afterwards Crosby complained referees Brad Watson and Chris Rooney let the Bruins get away with too much of the rough stuff.

David Krejci scored his second goal of the game at 4:04 of the third period to squash any chance of a Penguins comeback and Nathan Horton silenced the crowd for the rest of the game when he scored three minutes and 47 seconds later.

Going into the series, the talk was all about how the Bruins had to find a way to nullify both Crosby and Malkin. Well, they found a way Saturday, as Bruins centre Patrice Bergeron was all over Crosby. Malkin and linemates James Neal and Jarome Iginla were a force through the first two periods but they could not get a puck past Bruins goaltender Tuukka Rask.

Now it is Penguins head coach Dan Bylsma who needs to find some answers for Game 2 on Monday night.

"It's a situation we haven't been in yet, going down in a series, going down 1-0 [in this year's playoffs]," Bylsma said. "We have to put away Game 1, have better focus to our game and more patience than we displayed."

The Penguins' frustrations boiled over at the end of the second period in the wake of Boston winger Brad Marchand knocking Neal into the boards from behind. Marchand received a minor penalty and at the horn, Malkin wound up in a fight with Bergeron and Chris Kunitz had a confrontation with Bruins forward Rich Peverley.

This after notorious Penguins forward Matt Cooke received a major penalty and was thrown out of the game at 1:37 of the second period. He drove Bruins defenceman Adam McQuaid into the end boards from behind and given his history of such hits, this one will be reviewed by NHL disciplinarian Brendan Shanahan.

However, it was the Marchand hit that had the biggest effect on the game. The Penguins came out of that plus the Malkin fight with a power play in the first minute and a half of the third period. But with Malkin and Kunitz, two-fifths of their power play, on the bench, the Penguins were unable to eliminate the Bruins' 1-0 lead.

"I don't think the situation at the end of the second period was in our favour," Bylsma said. "We had a power play in the third period and we had two of our power-play guys off the ice with that altercation. It's not something we certainly want to be into.

"We want to play five on five, and starting at that point in time with those guys going off the ice it got us off our game. If we came out and scored a power play goal it would have been different but we weren't able to get back at our game after that power play."

Crosby said the Penguins had enough chances to get the lead they needed in the first 35 minutes or so when they carried the balance of the play. But they missed the net a few times, hit a couple of posts and Bruins goaltender Tuukka Rask was, once again, brilliant.

"That's the playoffs," he said. "We score a couple goals, we're not talking about [the Penguins getting frustrated]. We're talking about the chances we created, how we did a lot of good things.

However, Crosby was showing his frustration well before Malkin lost his cool. He was given an interference penalty midway through the first period and had many heated words for the referees over the rest of the period. He also got into a running verbal battle with Bruins defenceman Zdeno Chara, who was assigned to check him along with Bergeron.

"You know what? It's tough, [the referees are] letting a lot go out there," Crosby said. "So the more it gets like that, the more things are going to escalate.

"You keep letting guys do that stuff, they're going to push the envelope. I think that's something we obviously want to stay away from but it's kind of a natural thing when it gets like that."

The first 40 minutes were rather odd in that the first period was a great display of skill and action despite the fact both teams were idle for the last week but the second period turned out to be full of the sloppy hockey that is the trademark of rusty players. In any event, the Bruins took a 1-0 lead into the third because Rask was magnificent and they managed to frustrate the Penguins with their usual rough-housing.

Bergeron owned Crosby in the faceoff circle. He won 62 per cent of his faceoffs while Crosby was at 35 per cent. Malkin won a mere 17 per cent.

The Penguins ran into trouble early in the second period thanks to Cooke, who apparently cannot help himself when it comes to hitting opponents in a vulnerable position.

McQuaid, who escaped injury, should have protected himself, as it was clear Cooke was in the area, but at the same time the notorious Pittsburgh headhunter should have held up on the hit. The Penguins said they though Cooke deserved a minor penalty for the hit, not the major and game misconduct.

"McQuaid was able to get up pretty quick," Crosby said. "I don't think it's a great hit, don't get me wrong. He's got his back turned and it's a board.

"We all know the history of Cookie and it's going to be scrutinized a lot more because of that."

Well-balanced Bruins raring to go in Game 1 against Penguins
June 1, 2013 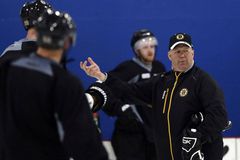 Shoalts: Bruins eager to get back to work after long rest
May 31, 2013 Defensive-minded Bruins look to slow down high-powered Penguins
May 31, 2013 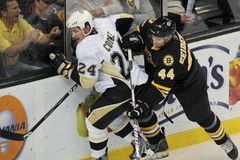 The inside story of Crosby’s gruesome facial injury
May 30, 2013 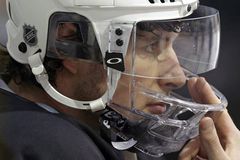