The trouble is they're better than this, and they know it, hence the atmosphere of general annoyance.

It's not that the Boston Bruins have had a bad year – they haven't – but championship success is accompanied by heightened expectations.

They clearly aren't being met at the moment.

"There's still 11 games left … so there's still an opportunity for us if we have a good finish to the season here, we could still take the division," said hulking winger Milan Lucic after his team's closely contested 2-1 loss to arch-rival Montreal on Saturday, Boston's third loss in four games this season against the division-leading Habs.

Lucic was visibly peeved after the contest (it didn't help he took a retaliatory penalty that led to the game-winning goal), and his demeanour suggested this is a squad that is sick and tired of not playing up to its considerable capabilities.

"The biggest issue that we've had the past 10-15 games is consistency throughout the lineup and getting all 20 guys going at the same time," he said.

Depth is nominally the Bruins' greatest asset, but Saturday's setback snapped a three-game winning streak, and showed in stark terms that the Bruins don't pose the same threat level without their inspirational leader, centre Patrice Bergeron, who is sidelined with a concussion.

That's not to say they can't be formidable.

The line of Lucic, David Krejci and Nathan Horton gave the Habs all they could handle on Saturday, but they didn't put their chances away at the crucial times against opposition that wasn't in the mood to roll over – call it a microcosm of the season.

The 41-year-old Czech may not be as speedy as he once was, but he remains dangerously deft with the puck, and created several nifty scoring chances despite playing much of the game with pluggers Gregory Campbell and Daniel Paille.

It was an eyebrow-raising line combination from coach Claude Julien, and not the only one.

In Bergeron's absence the Bruins coach also didn't feel young forward Tyler Seguin was up to playing centre, his natural position, in a game where first place in the division was at stake.

Not that Jagr seems to mind being surrounded by role players, a situation that is surely temporary.

"We've got good enough players, everybody can play with anybody, it's up to the coach how we're going to do it. I don't have a problem with anybody, as long as they give me the puck, I'm okay," he said, laughing. "I want the puck on my stick all the time. I'm always open."

Maybe an injection of levity is just what Jagr's new team needs.

It's only been two games, but the Jagr effect is clearly being felt.

Prior to Saturday's game, teammate Brad Marchand copped to a case of the nerves when he stepped on the ice with big No. 68 for the first time – and suggested he'll probably nick a stick or two from Jagr to keep as mementos before the season is all said and done.

Rookie defenceman Dougie Hamilton said, "I think everyone's excited to have him here and just to watch him, to see what he does, and just how good he is … everyone wants to, well maybe not keep up with him, but you want to play your best."

Jagr said he's been impressed with what he's seen to this point, but cautioned that no one should render any judgments on this team until Bergeron comes back.

The defending Selke Trophy winner as the NHL's best defensive forward has an unfortunate history with concussions, so it's an open question whether he'll be able to make a speedy recovery.

But the Beantowners' lineup will soon be bolstered by the return of centre Chris Kelly, and rock-hard defenceman Adam McQuaid should be ready for the playoffs.

Boston remains in a strong position to capture home ice for the first round, and the Stanley Cup conquest of 2011 is a recent-enough memory to inspire confidence in their abilities once the postseason ball begins.

Now that the Bruins have played their last regular-season game against their hated division rival Habs, they can concentrate on finding their elusive top form.

"It's not the end of the world," Jagr said. "If we play like we did in the second and third periods [Saturday] we'll be okay." 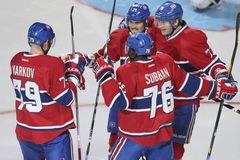