True to his word, Brian Burke kept a low-profile during his first fortnight with the Calgary Flames.

After joining the NHL team as president of hockey operations, he promised general manager Jay Feaster and head coach Bob Hartley would do most of the talking. Burke was in and out of town during September. He had a few charitable obligations to meet, bought a house and a pickup truck.

But on the eve of the 2013-14 season, Burke gave a progress report on what's happened since he took over – and after suggesting a lot of people had assembled for not much news, he was his usual, predictably candid, self.

By far and away his most interesting observations came in relation to left winger Sven Baertschi, who, before this summer's NHL entry draft, was the No. 1 prospect in the Flames organization.

Burke spent some time Monday evaluating the Joe Colborne trade – made last Saturday with his former team, the Toronto Maple Leafs – and gave a largely favourable report on the play of Sean Monahan, Calgary's top pick in 2013. Then came an innocent question about Baertschi – and he got it from both barrels.

Clearly, the winger didn't win over the new boss with his training camp performance.

Baertschi, the Flames' first pick in the 2011 draft, has played parts of two seasons in the NHL. There were some people who thought the 20-year-old took too much for granted this September, and, as a result, didn't compete nearly hard enough to earn his place. Baertschi did survive the final cuts, but the jury is still out on how much and how well he will play this year.

Burke is not above sending a message through the media and so, when asked what he's learned thus far of Baertschi, he answered: "That I don't know. That I don't know. I'm not sure. … All I've seen so far is flashes of brilliance. Flashes of brilliance are fine if you're working in the university, but they're not much good to people in an NHL building.

"There are three zones in the ice surfaces in this league. I don't see that he's learned to play and compete in two of them. He's got to learn there's a clock in this league and there's so many minutes in the game and that you've got to compete through all of it. I see this is a guy who's focusing on one area [scoring] and even then, sporadically," Burke said. "So I don't know what we have.

"I'm not ready to quit on a young kid. I'm not ready to throw him under the bus here today and rip him, but I think you can tell from my comments that I see big holes and I see a lack of commitment that's not going to get him anywhere in my books."

It was vintage Brian Burke – all measured, not angry, just stating the facts as he sees them. If that doesn't fire a light under Baertschi, it is hard to know what will.

Burke also had some interesting thoughts on Colborne, who came over to Calgary for a fourth-round pick. It was Burke, in his former role as Maple Leafs GM, who originally brought Colborne to Toronto (acquired from Boston in a package for defenceman Tomas Kaberle).

Burke said the Flames prize Colborne's size – six-foot-five, 213 pounds – because they were too small a team across the board, but they were also well aware the 23-year-old isn't "a black-and-blue" player.

This, by the way, can be a unique perspective in the industry of hockey, where teams almost always insist that if a player has size, he use it to play a crash-and-bang style. There are of course other ways of capitalizing on being that tall; being able to fend off checkers with your reach is one. (For example: David Steckel used his six-foot-five, 217-pound size and strength to evolve into one of the NHL's best faceoff men for close to a decade.)

Burke wants Colborne to undergo what he described as a "religious conversion" and change his style to a checking role. If Colborne does so – and it wasn't immediately clear if he knew that was what was expected of him – Burke predicted a long career ahead for the former first-round pick (16th overall in 2008).

It wasn't a surprise the Flames kept Monahan on the NHL roster when they got down to numbers Monday – the 23-man squad doesn't include Michael Cammalleri, who is on injured reserve because of a hand injury. Burke indicated Monahan's stay would be predicated on how many minutes Hartley was prepared to play him.

He used, as an illustration, how the Maple Leafs handled prospect Morgan Rielly last year. Rielly didn't stick because coach Randy Carlyle was only prepared to use him about eight minutes per night. That, according to Burke, wasn't enough to enhance his development. Returning him to junior, where he could play constantly and in every situation, was the better choice for Rielly – and it may be for Monahan as well.

"There are two good outcomes," Burke said, "and Sean's going to dictate with his play early on … if he can justify the minutes in situational ice time that we would need to keep him here. … He hasn't been as physical [in the preseason] as he was in junior, but that isn't unusual for an 18-year-old. I was impressed. I am impressed." 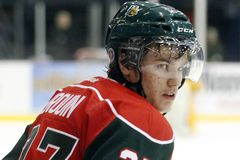 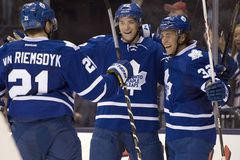 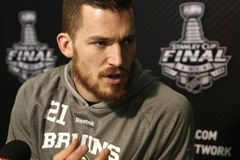 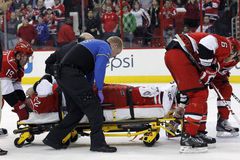