Growing up in Salem, N.J., Johnny Gaudreau had access to ice time constantly, because his dad, Guy, operated the local rink. Summers, when regular hockey was over, there was the option of playing in three-on-three leagues.

"And I was on three or four different teams," reported Gaudreau, the Calgary Flames' second-year scoring star. "In the summer, I loved playing three-on-three. I played a lot when I was younger, growing up."

In a year when the rest of the NHL is trying to figure out three-on-three, Gaudreau has it nailed. The Flames are 8-1 in overtime, and Gaudreau – a.k.a. Johnny Hockey – has been in on seven of the game winners (three goals, four assists), one of the primary reasons his team is back in the playoff hunt after a slow start.

Gaudreau, a finalist for the Calder Trophy as the NHL's rookie of the year last season, has not skipped a beat in his second year. At the NHL's Christmas break, he was seventh in the NHL scoring race, with 15 goals and 22 assists in 34 games. He scored a hat trick in the final game before the holidays, with his brother Matt in the stands watching, leading Calgary to its 10th consecutive home-ice victory to tie a franchise record set in 2006.

The Flames go for a record 11th home win against their provincial rivals, the Edmonton Oilers, when they resume the post-Christmas schedule Sunday. A victory and Calgary will have the same point total – 36 points – after 35 games that it did a year ago, when the Flames unexpectedly made the playoffs after a five-year absence.

Calgary's improved play can be attributable to several factors – steadier goaltending from Karri Ramo, more scoring from their skilled defence corps – but Gaudreau has been the offensive engine that has driven the team from the start of the season.

At 5-foot-9, 157 pounds, the elfin forward has a pickpocket's ability, as he did in the final game before the break, swiping the puck from the Jets' Mark Scheifele to score on a breakaway and give the Flames a two-goal third-period cushion.

Coach Bob Hartley, a big supporter of Gaudreau's, says he had no worries at all about what he might do for an encore in his second season.

"He didn't exceed what I was expecting because I expected a lot from him," Hartley explained. "In the summer, he comes and works at my hockey camp. Not only do I know the player, I've gotten to know the person – and for me, that's very important. I don't motivate the player. You teach a player – how to shoot, how to skate – but you motivate the person. You motivate the human being – and this kid …

"We all talk about how good he is and how skilled he is three-on-three and how fast and dynamic he can be in tight areas – but you watch him practise and how he enjoys playing the game, he's an unbelievable competitor.

"I call him Mighty Mouse because he's fearless out there. He's not an outside guy. He's not looking for the cookies; he wants to be the difference maker. He wants that puck – in the big games and the big times. I think the sky's the limit for him."

Gaudreau has five three-point performances this season in 34 games, including three in the past nine games, in which he has recorded 15 points. His first goal against the Jets was also the 100th point of his career, in 115 games played, the fastest any Flames player has managed that since Sergei Makarov did it in 93 games back in October, 1990.

As a sports fan, Gaudreau knows the inherent perils of the second year in a pro athlete's career – and how play can sometimes tail off after the initial exuberance of the NHL experience can give way to the relentless grind of a long season. Moreover, for players at the highest end, such as Gaudreau, opposition teams start to pay particular attention to them. They face top defence pairs and usually the opposition's top forwards as well.

In preparing for the season, Gaudreau says his goal was to "build off last year. I had a lot of help from players throughout the season last year that really helped me – and they're doing the same thing this year. I'm still a young guy. I'm still learning. For me, it was just trying to get better every single day still, and making sure I try to get as many scoring chances as possible."

One of the challenges for Flames general manager Brad Treliving will be to get Gaudreau – and his regular centre, Sean Monahan – signed to contract extensions next year. Gaudreau played a single game at the end of the 2013-14 NHL season after signing his first pro contract once his college team's season ended.

It was designed to burn a year off his entry-level deal, and means he will be a restricted free agent following this season. Some teams try to sign players still in the entry-level system to a bridge contract – a short-term, two-year deal at smaller numbers to get them through to their arbitration years – but for the really high-end young players, it is getting to be an increasingly difficult task. And while many players in contract years have difficulty keeping their focus on the ice, just the opposite has been true for Gaudreau.

"It's something, when it happens, it happens," said Gaudreau, of signing his next contract. "I don't worry about it. Just play your game and play for the team and do your best to help the team win and hopefully, you have some individual success as that goes along. But you just put that in the back of your mind and worry about it at the end of the year."

Currently, there is a curious move afoot to get Arizona Coyotes' enforcer John Scott voted to the all-star team as the Pacific Division's representative, even if Scott has been on waivers three different times this season and has hardly played.

Gaudreau is in second place in the Pacific Division fan balloting for the game, which will, for the first time, feature three-on-three hockey exclusively.

Unless he gets injured in the next month, Gaudreau will almost certainly be chosen to play anyway, after going to the all-star game last year as Young Star selection.

Maybe it's time for web-savvy Flames' fans to save the NHL the embarrassment of seeing a marginal enforcer going to the all-star game by making a push for Gaudreau.

Three-on-three, according to Gaudreau, is a fun but challenging exercise.

"When you get a chance, you've got to make sure you score – because most likely, if you don't score, either the goalie's playing it to start an odd-man rush, or you miss the net and there's an odd-man rush going the other way."

Rekindling Flames look to carry momentum from home onto the road
December 14, 2015 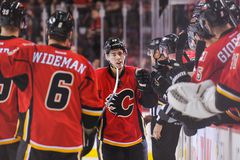 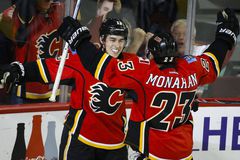 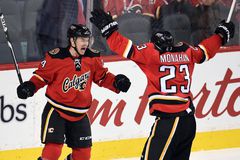 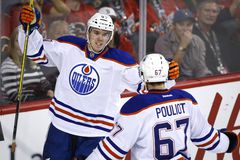