It wasn't easy, but then it never is, when Canada plays Russia in a best-of-best hockey competition – and really, who would want it be?

The old Cold War rivalry, which started with the Summit Series in 1972 and probably peaked with the 1987 Canada Cup, was on tap again Saturday night, in the World Cup of hockey semi-final.

In a game that had a little of everything – high drama, seesaw action, multiple lead changes – Canada overcame a one-goal, second-period deficit and ultimately rallied to defeat Russia by a 5-3 score.

The victory puts Canada in the tournament final, which begins Tuesday, where they will play either Sweden or Team Europe, who meet in the second semi-final Sunday afternoon at the Air Canada Centre.

There was some question about which team might pose the greater threat to Canada – Russia or the young North American squad, who were eliminated in the preliminary round.

But Patrice Bergeron, one-third of the line that dominated play along with Brad Marchand and Sidney Crosby, said Russia's long-standing history with Canada makes every game between the teams a special occasion. "That rivalry goes beyond my playing years for sure," Bergeron said. "It's always special to play Russia, all the legends of the game that come from that country. It's always a great atmosphere to play them – and today, they gave us a great game."

Canada held a vast territorial edge in the play – at one point nearly midway through the game, the shots were 24-7 in their favour – but it was a nail biter until the early stages of the third period, thanks to the inspired play of Russian goaltender Sergei Bobrovsky.

Bobrovsky, whose day job is to play goal for the Columbus Blue Jackets and as recently as 2013, won the Vezina Trophy as the NHL's top goaltender, gave the Russians hope, making save after sensational save to keep things close.

It looked as if frustration might be setting in for a Canadian team when back-to-back goals by Nikita Kucherov and Evgeny Kuznetsov gave the Russians a short-lived 2-1 lead 16:24 into the second period.

The shots were 30-12 in favour of Canada at that point, but when Ryan Getzlaf clanged a shot off the goalpost, you wondered, if it was going to be one of those nights when nothing was going to go in, no matter how many scoring chances the Canadian squad generated.

"We knew we still had the game in our hands, even though there was a little bit of a momentum swing there," Canadian defenceman Drew Doughty said. "Being down 2-1 in the second half of the game was tough, but we showed our character and came back and won it pretty dominantly."

Just as they did in the tournament opener a week ago, Canada received an inspired shift from captain Sidney Crosby and his line shortly after Kuznetsov scored.

Crosby started the pivotal play by stripping the puck from Russian defenceman Andrei Markov, and feeding teammate Brad Marchand for a wide-open chance by the side of the net. Marchand's goal came at the 17:36 mark of the second period and sent the teams into the dressing room tied after 40 minutes and put some energy back in the building.

Early in the third period, that same combination – Crosby to Marchand – restored the Canadian lead for good. Bobrovsky eventually started to wilt under the pressure and goals by Corey Perry and John Tavares put things away.

Crosby also scored the opening goal of the game, which came after took the puck away from defenceman Dmitry Kulikov deep in the Russian end and deked Bobrovsky with a series of deft fakes.

Crosby finished the night with three points to take over the tournament scoring lead with seven.

Afterward, it was Canada's poise that was a major talking point among players and coaches. Canada went into Saturday's action having trailed for only 89 seconds the entire tournament. Against the Russians, Marchand's first goal came 72 seconds after Kuznetsov gave the Russians their one-and-only lead. Kuznetsov celebrated his goal with a modified bird dance that turned out to be a touch premature.

"Honestly, everyone knows what's going on, that we had to increase the intensity but don't force plays and keep being smart," Bergeron said. "You can tell the experience in the locker room. Nobody panicked. Guys remained calm.

"We stayed positive – and it worked out." 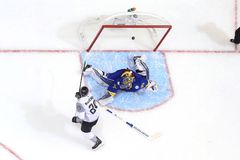 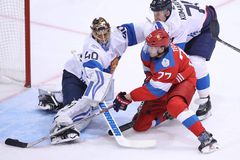 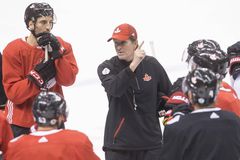