A pair of Canadian forwards breathed sighs of relief in Canada's 8-0 win over Finland at the women's world hockey championship Friday.

"Playing in the world championships, it's always a battle" Agosta-Marciano said. "Doesn't matter who you're playing against. To get that first goal of the tournament is always a good feeling."

The Ruthven, Ont., forward smacked her stick on the ice in triumph after scoring the first goal of her hat trick.

"It's always hard to get that first goal, but once you get it, you gain that momentum," she said. "For me, it really helped."

Canada finished first in Pool A with eight points ahead of the U.S. with seven. Both countries secured berths in Monday's semifinals.

Russia, Finland, Switzerland and Germany will play in Saturday's quarter-finals. The Czech Republic and Sweden will play a best-of-three relegation round.

Bram scored her first goal and Canada's first of the game in her 15th appearance with the national team. She was held scoreless in her world championship debut in 2012.

But it was worth the wait for the 22-year-old from Ste. Anne, Man. The announced crowd of 18,013 at SBP Arena set a single-game record for attendance at a female hockey game, according to Hockey Canada.

"To see it go in and get the monkey off my back was very exciting," an elated Bram said. "The fans were going nuts so it was great.

"I was hoping to get it playing Switzerland. Thirteen goals and I didn't get one and I was like 'oh, it's never going to come.' To start it off today was great."

Brianne Jenner contributed a pair of goals with Jennifer Wakefield and Sarah Vaillancourt also scoring for the defending champions.

Finnish goaltender Noora Raty made 30 saves on 36 shots before she was replaced by Meeri Raisanen in the third period. Raisanen allowed two goals on seven shots.

In what is the second year for this tournament format, the top four countries in the world are grouped in Pool A and the fifth to eighth are in Pool B.

Canada and the United States move onto Monday's semifinals as the top two teams in their group. Finland was third with three points and Switzerland fourth with zero in Pool A.

Russia went undefeated to top Pool B and Germany was second with four points. Russia faces the Swiss and the Finns take on Germany in Saturday's quarter-finals.

The U.S. shut out Switzerland 5-0 on Friday. Russia blanked Sweden 4-0 and the Germans doubled the Czech Republic 6-3.

Canada was without captain Hayley Wickenheiser for a second straight game. Canada's all-time leading scorer suffered an upper-body injury in a 3-2 shootout win over the U.S. to open the tournament Tuesday.

She left that game in the second period and did not play in her team's 13-0 win over the Swiss the following night.

Finland has never beaten Canada, although there have been some closer games in recent years. Raty plays for the NCAA champion Minnesota Golden Gophers and was a finalist for the award that goes to the NCAA's top player this season.

The Canadians pounded Raty with 50 shots at the world championships two years ago in Zurich, Switzerland, yet won by a score of just 2-0.

But Finland's goaltender and defence did not hold up under Canada's onslaught Friday.

Trailing 3-0 in the second period, Finland's best chance to get into the game was Venla Hovi's back-to-back scoring chances and a two-man advantage for a minute 50 seconds.

After Szabados stopped Hovi on a breakaway, the Finn had another opportunity on a turnover. Hovi thought she scored, but the Canadian net was pushed off its moorings and the referee waived it off. The Finns were unable to convert a 5-on-3 with both Lauriane Rougeau and Ward serving minors.

Agosta-Marciano scored her first with a minute to go in the second period and again less than two minutes into the third to make it 5-0.

"I think Meghan wasn't as happy with her last game as the first few we've played," Church said. "I challenged her to elevate her game and I think she responded really, really well. She's most effective when she uses her speed, especially out wide."

The longer the Finns and Raty can keep Canada from scoring, the more confidence they gain. So Bram's first career goal for Canada's national team at 14:25 of the first period was a shot across Finland's bow.

"(Finland) played us pretty tough to that point and we were able to gain some momentum off of that and put them on their heels so I think that was a critical goal," Church said.

Jenner scored a pair before the period ended for her third and fourth goals of the tournament.

Over 300 girls' hockey teams have descended upon Ottawa for the Ontario Women's Hockey Association provincial championships, which contributed to Friday's record-setting attendance.

Ottawa held the previous record of 16,347 set Jan. 1, 2010, when Canada defeated the U.S. 3-2 in a shootout in a pre-Olympic game. Vancouver's Rogers Arena hosted the Olympic women's final in 2010, but seating capacity shrunk because dozens of seats were taken up by media.

Montreal's Caroline Ouellette also didn't play against the Swiss because of an upper-body injury, but returned to the lineup Friday to play her 200th career game for Canada.

She's the third player in history to reach that mark. Jayna Hefford is a game away from 250 and became the all-time leader in this tournament ahead of Wickenheiser at 247.

"To get to 200 international games with our national team, it's going to get harder and harder to get to that level with the quality of players we have coming through the under-18 and under-22 programs," Church said. "To keep your position on this team for that length of time is pretty special." 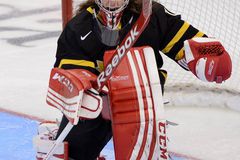 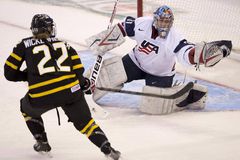 Young guns step up for Canada at world championhsips
April 3, 2013 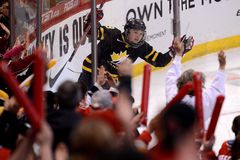 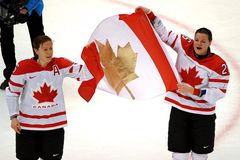