Or so it feels these past few days, as Canada seems pitted against Russia each time the puck drops in this rather unexpected Back-to-the-Future twist to the national game.

First it was the Winter Classic in Pittsburgh on New Year's Day, with HBO, NBC and the hockey media world fixating on a wildly over-hyped outdoor clash between Sidney Crosby of Coal Harbour, N.S., and Alexander Ovechkin of Moscow. Crosby, captain of the Pittsburgh Penguins, and Ovechkin, captain of the Washington Capitals, are today the two prime faces of professional hockey: Crosby, the polite, studious, respectful Canadian; Ovechkin the brash, fun-loving Russian who cockily raised his stick in victory as the final seconds ticked down in his team's 3-1 victory at Pittsburgh's Heinz Field.

And this Wednesday in Buffalo, it will be Team Canada against Team Russia to decide world supremacy in junior hockey – a gold-medal match that no one saw coming until Monday's semi-final rounds, when the Russians stormed back to defeat the highly-touted Swedes 4-3 in a shootout and the Canadians rode roughshod over tournament-favourite U.S., winning 4-1 to reach the final.

While it may feel a bit like 1972 at times, it most assuredly is not. That Summit Series – renowned in Canada for the Paul Henderson goal that won it with only 34 seconds left in the final game – was seen as a match between the flamboyant superstars of Canadian hockey and the faceless, emotionless Soviets. All passion – from Phil Esposito's tearful Vancouver speech ("We came because we love Canada!") to Henderson's leaping victory dance – seemed clothed in the red maple leaf.

Monday night in Buffalo, however, it was virtually impossible to pick a Canadian star, so surgical was the Canadian team effort in dissecting the much-vaunted American speed and skill.

Canada's head coach Dave Cameron said that as long ago as last summer his staff had been working with these young men "to convince the players to give their skills to the team." They did so, and no matter what the final score turns out to be Wednesday, the strategy has been a remarkable success.

While Canadian hockey has evolved increasingly into team play and stringent coaching systems – three coaches back of the bench, one sending messages down from above, some even using iPads between shifts to point out errors – Russian hockey has gone in the opposite direction. Gone are the days when a tyrannical coach could treat his players as if they were soldiers, which they usually were. Today's Russian coaches bemoan their lack of influence in what happens on the ice. In the years following Mikhail Gorbachev's perestroika and glasnost, individualism and self-determination became part of the Russian character, in hockey as well.

Renowned Soviet defenceman Slava Fetisov – who referred to his former teammates as "ice robots" – was one of the first to leave the crumbling totalitarian system for the NHL. Already an older veteran, he eventually came to the Detroit Red Wings where he and old Russian teammates like Igor Larionov were able to practice the "creative hockey" they had always dreamed of playing.

Mr. Fetisov and Mr. Larionov set in motion a Russian revolution in professional hockey that is still sorting itself out. Brilliant youngsters like Alexander Mogilny and Pavel Bure followed. While the traditional Canadian hockey hero is cast in a humble style set by Jean Béliveau and Gordie Howe and carried on by Bobby Orr, Wayne Gretzky and others, Russian hockey heroes have been more like movie stars, with all the glamour and problems that can entail.

Modern Russian hockey players seemed, at times, so determined to show that they were different from their old image that when young Darius Kasparaitis dropped the gloves with respected NHL fighter Rick Tocchet, Mr. Kasparaitis later explained to the press that Mr. Tocchet had "called me a 'Commie' – I didn't like that."

Russian players have certainly entertained, but they have also disappointed and frustrated fans who, early on, embraced them. Alexei Yashin may have been brilliant at times as an Ottawa Senator, but the lingering memory is of contract headaches and disappointment. Two of today's most gifted NHLers – Alexei Kovalev of the Ottawa Senators and Ilya Kovalchuk of the New Jersey Devils – are having years in which their lack of interest and lack of production have outraged fans, Mr. Kovalchuk all the more so in that only last summer, the Devils signed him to a 15-year, $100-million contract.

NHL teams have grown increasingly wary of Russian talent in recent years, the number of drafted 18-year-old Russians dropping to a half-dozen in 2009 and only eight in 2010, despite the proof that this junior team in Buffalo holds that Russian teenagers obviously still excel at the game.

There is a long string of stereotypes that the hockey world applies to Russian players. They are called "enigmatic" – sometimes referred to as "the Russian factor" – and often dismissed as greedy players interested only in themselves, not their teams.

While that may hold up in some instances, it does not in others.

Washington's Mr. Ovechkin is not leading the individual goal-scoring race as he usually does, but he has led his Capitals into an ongoing battle for the very top of the NHL's Eastern Conference. The Washington captain is praised as much these days for his team leadership as for his wrist shot.

His example seems to be filtering down, as well.

"It doesn't matter who scores the goals," said Denis Golubev, who scored the key shootout winner against Sweden. "It's not about me – it's about the team."

Mr. Golubev also, it might be pointed out, crossed himself just prior to taking that shot – something more in keeping with, say, Claude Provost jumping on the ice for the old Montreal Canadiens than with any heritage from the old Soviet Union.

"God was with us," added Russian captain Vladimir Taresenko.

Another intriguing change in the stereotype of the Russian game is that what was once considered the Achilles heel of Russian hockey – an inability to fight back late in a game if they are behind – has been put to rest in Buffalo. These Russian teenagers staged a stunning comeback Sunday against the Finns after being down 3-1 to win 4-3 in overtime, then tied the Swedes in the dying seconds of Sunday's semi-final game to force overtime and get to the shootout, which they won.

Wednesday's game will be played in an atmosphere rather reminiscent of the great Canada-Russia clashes of the past, including the 1972 Summit Series and the 1987 Canada Cup. Buffalo may be in northwestern New York State, but it has blushed red throughout this long tournament as fanatical Canadian fans have driven from as far away as Alberta and Nova Scotia to attend and raise signs calling the HSBC Arena "Canada's house."

So dominant has the Canadian presence in Buffalo been that before Monday's match against the Americans, the arena mascot, Sabretooth, tweeted that "Tonight will be strange. I will be hated by about 18,000 people in my own arena."

No such message needs be sent to either team scheduled for Wednesday's final, however.

Canada knows from experience to beware the Russian bear.

And Russia has to be wary of the power of the Canadian Maple Leaf.

Just as matters turned out, much to Canadians' surprise, in 1972.

Roy MacGregor's hockey column appears regularly on Tuesdays and Thursdays in The Globe and Mail and on globesports.com.

Canada thrives in home away from home
January 4, 2011 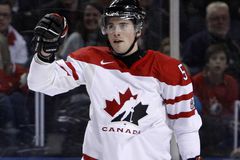 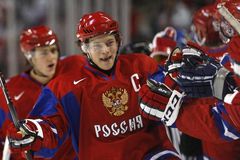 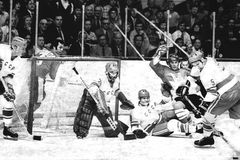 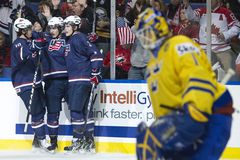