You know things are going well for Canada when the starting goaltender debate becomes a hot topic at the world junior hockey championship.

Head coach Dominique Ducharme wouldn't tip his hand Friday on who will get the start for Saturday's showdown against the United States. Netminder Carter Hart played well enough to win in both of his games earlier this week while Connor Ingram posted a six-save shutout victory in his lone appearance.

"The one thing that's for sure is that we want our two guys to be involved and ready to play," Ducharme said Friday. "We'll see how we do it."

Hart, who was initially expected to see most of the action in the tournament, opened with a so-so performance in a 5-3 win over Russia on Boxing Day. Ingram helped Canada to a 5-0 win over Slovakia a day later.

Hart returned to the crease Thursday night but let in a pair of goals in a 10-2 rout of Latvia.

The Americans will provide a stiff challenge regardless of who's in the Canadian net. Clayton Keller and Colin White have anchored a solid offensive attack that boasts four strong lines.

Both Canada and the U.S. have opened the tournament with three wins apiece.

"The main focus is on us," Ducharme said. "I say it pretty much every day. But we want to be at our best using our tools. Obviously there are little details. We know they're fast, they're skilled.

"We have little things to make sure that we do right, but the main thing is being at our best."

Captain Dylan Strome has been a rock for the Canadian side, which has had offensive contributions from up and down the lineup. Taylor Raddysh broke out with a four-goal performance on Thursday.

The first seed in Group B will be on the line Saturday afternoon.

"It's a rivalry that has gone back a long time," Strome said. "With world junior games, you think of Canada and U.S., you think of New Year's Eve. So the story is there, we've got to write it.

"It should be fun and we're looking to make another chapter in that storied rivalry."

The playoff crossover format means the winner will play the fourth seed from Group A in the quarter-finals Monday. The loser will finish second in Group B and next meet Group A's third seed.

Ducharme did notice some composure issues crop up early in the Latvia game but felt his team did a nice job settling into a rhythm. There will be little room for mistakes against the deep American side, which has outscored the opposition 14-5 in the tournament.

Canada, meanwhile, has scored 20 goals so far and allowed just five. The power play is far and away the best in the 10-team field with Canada converting eight of its 14 opportunities (57.1 per cent).

Forward Mitchell Stephens sat out the Latvia game with an ankle injury but he returned for Friday's one-hour practice session at MasterCard Centre. Ducharme said he'll be a game-time decision.

A sellout crowd is expected at Air Canada Centre for the preliminary round finale for both teams.

"We know that defensively we're going to have to be at our best," said Canadian forward Matt Barzal. "They're a pretty sound team. Defensively, goaltending, everything, they have a really strong team and so do we.

"It's going to be a great game. Two great teams and I'm looking forward to it."

Canada, which settled for a sixth-place finish at the 2016 tournament in Helsinki, will play its playoff round games in Montreal.

The semifinals will be played Wednesday and the medal games are scheduled for Thursday at Bell Centre. 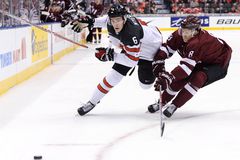 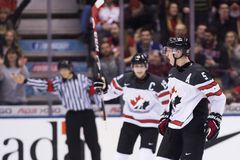 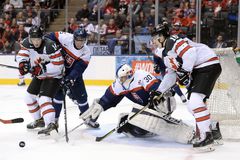