Looming eight subway stops north of Yankee Stadium is a brick, stone and concrete monstrosity called The Kingsbridge Armory, built almost a century ago in the Bronx to discourage civil unrest and to train soldiers.

With turrets and cupolas, the armoury looks like a medieval castle. In front is an empty moat. Inside the basement and office wing, Kingsbridge feels like a haunted house, with bullet-pocked walls and dark, narrow halls displaying decades of graffiti.

But to Mark Messier and Sarah Hughes, in co-operation with private investors and New York City, the armoury represents a vision that could turbocharge hockey and figure skating in a metropolitan area of nearly 20 million people.

Messier (in the Hockey Hall of Fame) and Hughes (an Olympic gold medalist for the United States in 2002) are equity partners promoting The Kingsbridge National Ice Center, to open in five years with nine full-sized skating rinks under one huge roof.

The building is on a major train line and near several busy highways. Messier said it will attract not only neighbourhood youth and local leagues, but also top tournaments from around the United States and the world.

Backers hope the biggest ice facility on Earth will make money and diversify the ethnic culture of ice sports. That may sound grandiose, as optimistic as Messier's promise two decades ago to lead the New York Rangers to the Stanley Cup. Messier delivered on that pledge in 1994, the team's only championship since 1940. And he said last week that triumph could have meant much more.

"We captured the imagination of a lot of New Yorkers who weren't necessarily hockey fans or hockey players," Messier said. "Then, we ran into a roadblock."

The problem, he said, was a lack of indoor ice facilities. "There are 1.8 million kids here looking to play sports," Messier said. For hockey, he added, "the talent pool is so untapped."

Messier is from Edmonton and Hughes's father is from Toronto, but they are not the only participants with Canadian roots in a project involving $275-million (all currency U.S.) from developers and $30-million from the city.

The designer will be Murray Beynon of Toronto, whose BBB Architects oversaw construction of what was then called SkyDome in Toronto. Having designed Rogers Arena in Vancouver and Air Canada Centre in Toronto, Beynon's firm is rebuilding New York's Madison Square Garden from the inside out.

Beynon has called the Madison Square Garden project "a Rubik's Cube of surprises" and "a herculean task." The ancient armoury will be complicated in different ways, and Beynon sounds enthused.

"It's spectacular," he said of the armoury's interior. "Fabulous structure. It's phenomenal." He called the exterior "imposing" and "almost awe-inspiring."

Of the project's design, Beynon added: "We've been going pretty well full tilt for three months. We're into the details."

Another Canadian leading the project is Jonathan Richter, president and co-founder of KNIC Partners. He was born in Belfast, but grew up in Toronto and learned to skate on the rink outside City Hall.

"That's when I fell in love with hockey," said Richter, the son of a West African father and an Irish mother. "I was six years old. It's burned into my memory. I still play hockey on weekends."

Not that Kingsbridge is a mere labour of love. Richter can recite person-to-rink ratios in many population centres. He can tick off the demand for, and price of, ice rentals – as much as $800 an hour on the seven indoor rinks within the five boroughs of the city.

"We'll offer about 62,000 hours of ice per year," Richter said, predicting "up to three million visitors" annually. Rinks will be on two levels, with five on the main floor and four above them. The showcase arena will seat about 5,000.

Richter said Atlanta, Dallas and Los Angeles have more ice sheets per capita than the New York area, which will have three NHL teams – the Rangers, New Jersey Devils and New York Islanders – within 25 kilometres, once the Islanders move to Brooklyn.

Richter, 47, said his parents moved to Canada instead of the United States in the 1960s because Canada more readily welcomed mixed-race families then.

Messier stoked Richter's interest by citing the demographics of the Bronx for hockey.

"Mark said, 'You guys are going to change the game with all Latino and African-American kids,'" Richter said, adding the rinks will donate $1-million in free ice time to community groups in the first year "to kick-start" neighbourhood involvement.

The neighbourhood's history goes back more than three centuries. The King's Bridge was first built in 1693, over Spuyten Duyvil Creek by Frederick Philipse, a Dutch nobleman and slave trader who became loyal to the British when they took charge.

After the American Revolution, the military descendents of the honour guard at George Washington's presidential inauguration – the Washington Greys – made the Kingsbridge Armory their home.

The 258th Field Artillery Regiment of the New York State National Guard still recruits from an office attached to the building and still calls itself the Washington Greys. At least one hockey team in Kingsbridge will be named the Washington Greys, the developers said.

During the Second World War, according to The New York Times, the armoury was a registration site for immigrants of enemy nations. In recent decades, the building was used both officially and unofficially as a homeless shelter and for special events like rodeos.

Kevin Parker, a former Wall Street banker who is chairman and chief executive officer of the project, led a tour of the 750,000-square-foot edifice last monthjune.

In the basement, the group visited an abandoned basketball court with wood backboards. Nearby was an indoor pistol range Messier hoped to turn into a bullpen where hockey players could practise their shots. But he was told such precious space will go to some of the 450 indoor parking spaces.

The KNIC group said its building will have one more ice sheet than the Schwan Super Rink in Blaine, Minn., which has eight. In addition to rinks and seats, the refurbished armoury will include locker rooms, a store, a VIP lounge and food facilities.

Ground breaking is scheduled for 2014, after final civic approval, which should be smooth in that New York Mayor Michael Bloomberg welcomed the developers in a news conference on April 23.

After Hughes, Messier and several others finished a recent two-hour prowl of the musty and dusty bowels of the armoury, the visitors put down their flashlights and rehydrated before stepping out under the summer sun.

Parker, the tour guide, said: "It's almost destiny that this is to happen. The stars are definitely lining up." 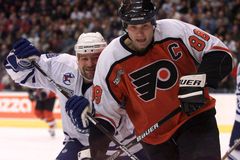