When the Canadian women's hockey team dons black and yellow Livestrong jerseys in their first game of the world championship, they won't be thinking about Lance Armstrong.

Many players' lives have been touched by cancer and that will be on their minds Tuesday night.

Nike's line of Livestrong apparel raises money for the organization established 16 years ago by Armstrong, who is a cancer survivor. But the cycling star's relationship with the brand ended last year with revelations he took performance-enhancing drugs and lied about it for years.

While distancing itself from Armstrong, the Livestrong Foundation continues to raise money to help people with cancer via its programs and services.

"My perspective personally is Livestrong may be the greatest achievement Lance Armstrong had as an athlete. Beyond what he did on the bike and winning and beyond his cheating and what's happened to his reputation lately, this is a really positive thing.

"It's important for us to look at what it does for the millions of people as opposed to what one person did."

Church's father David died of cancer in January at the age of 70.

Defenceman Tessa Bonhomme, who is sponsored by Nike, is a poster girl for the Livestrong jersey campaign. Her grandmother Sylvia is a breast cancer survivor.

While it's not difficult for players to get behind an organization that helps those stricken with the disease, some are wrestling with the thorny issue of Armstrong.

"It's hard because growing up, Lance Armstrong was a huge hero for me," forward Caroline Ouellette said. "I read all his books. It was such a story of hope. I bought so many Livestrong clothes in my life and it was just like my heart was broken.

"But when I see Tessa wearing the jersey, I feel pride because for me, she's someone that lives strong. She's the message we need to send to every child that should take on sport and the benefits that sport can bring and also the help that foundation can give to people that are battling with cancer."

Nike says it has helped raise more than $100-million for the Livestrong Foundation and now stresses the organization is "about a cause and not one individual."

"The beauty of the line is that is raises funds for our mission, but it also raises such great awareness and it gives people a way to celebrate people in their lives who have had cancer, have survived cancer or maybe passed away from cancer."

Nike would not answer questions about the Livestrong brand post-Armstrong and how the Canadian women's team fits into that strategy.

"We're unable to comment on this topic due to business process," a spokesman said, referring The Canadian Press to the Nike statement posted Jan. 17 on its website.

"Nike does not condone the use of illegal performance-enhancing drugs in any manner," the statement said. "We love sport and believe in the integrity of competition.

"We terminated our contract with Lance Armstrong in October 2012. We remain saddened after being misled for more than a decade. Nike plans to continue support of the Livestrong initiatives created to unite, inspire and empower people affected by cancer."

If Nike wants to associate the Livestrong brand with athletes other than Armstrong, the Canadian women's team seems like a safe place to start. How do the Canadian players feel about Nike rebuilding that brand on their backs?

"It might be a little soon with what's gone on with Lance, but the fact they've disassociated themselves from the connection with him and what it stands for, which is raising money for cancer, is a good thing and what I'm all about," Wickenheiser said.

It's common for Canadian hockey teams to wear a special jersey in their first games of international tournaments. The uniforms are auctioned off to raise money for various causes.

The Canadian women wore pink to open the 2007 world championships in Winnipeg in homage to the jerseys the women wore in 1990.

Nike supplies jerseys to Hockey Canada's teams. During meetings with the company's reps a year ago, the decision was made for the women to wear the Livestrong colours in Ottawa, according to Hockey Canada chief operating officer Scott Smith.

There was no pressure from Nike to do so, he added.

"It clearly was Hockey Canada's decision," Smith said. "We continue to believe that because of the prominence of hockey in this country, because of the great role models we have on our women's team, it's a good opportunity for us to be associated with a foundation that contributes greatly to cancer survivors."

Along with Bonhomme and Hefford, Meghan Agosta-Marciano and Gillian Apps are other Nike-sponsored athletes on the Canadian team. In learning more about Livestrong, Hefford said she got past any qualms about associating with the brand.

"Obviously (Nike) wants to rebrand and take themselves away from the negative side of his athletic career, but it's so much bigger than just one person. It's about helping millions of people every day." 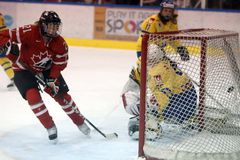 The IIHF women’s world championship big question: Who will be third?
March 18, 2013 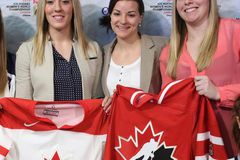 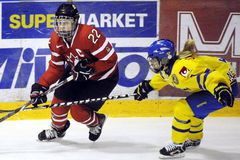