There was rage, and some heartbreak, with plenty of bewilderment and shock to go around.

Coming agonizingly close to every hockey player's dream will do that to you.

No one picked the Montreal Canadiens to win the Eastern Conference at the beginning of these playoffs – let alone at the opening of the season – but they will rightly wonder what might have been.

"It's tough to be proud right now," said winger Max Pacioretty, who said the feeling in the Habs' room was they matched up more favourably against the New York Rangers than Boston, whom they defeated in the second round.

Added teammate P.K. Subban: "it weighs heavy no matter who you are, when you have an opportunity to go to a Stanley Cup final and you don't go, it sucks. That's pretty much it."

Former Habs winger Michael Cammalleri said after their last conference final run, in 2010, the hardest part of losing at that stage is "you start believing what you're capable of" by the third round.

So the Stanley Cup drought for Canadian teams will stretch into a 22nd year.

The 2013-14 campaign must objectively count as a success, and in a few days' time it may feel that way to the Habs' players; the organization will now have some questions to ponder after what will, in a few days' time, have the look of a step forward.

As in: is the team as currently constructed really a Stanley Cup contender or just a fortunate one in a weak conference? Can they fill the holes in the lineup, notably on the blueline, from within? Is the strategy to develop its youngsters working? What to do with their pending free agents?

They'll have the summer to think about that, and a good deal more besides.

There will be a tendency to ascribe their Eastern Conference final series loss to New York in six games to the Game 1 injury that removed all-world goalie Carey Price from the equation.

The fact is goaltending wasn't really the Habs' problem in this series, minor-league call-up Dustin Tokarski has talent, and courage to burn.

His double-save on Derick Brassard and Mats Zuccarello early in the third period kept the game close, and he battled throughout a game where his team made shocking lapse after ridiculous error – Brian Gionta, Stanley Cup champion, throwing blind passes up the middle? Really? – the Habs have a prospect on their hands.

"That game could have been 4-0 or 5-0, he made some unbelievable saves, especially there in the third period . . . if he didn't make a name for himself in the first couple of games, he did tonight," Pacioretty said. "It's not an easy situation filling Carey Price's shoes and he did a great job of that."

The 24-year-old Saskatchewan native, who started the last five games of the series in relief of Price, was stoic in defeat, saying "I'm going to remember this for a little while, sure . . . hockey's about pride and giving everything you've got, and I think I came in here and gave everything I had for these guys. It's also about getting better through the process and learning and hopefully coming through."

Tokarski allowed only one goal – to former Hab Dominic Moore – but it turned out to be a comfortable margin.

Though Montreal was riding the good feelings of a comprehensive victory in Game 5, they couldn't match the Rangers' legs and desperation.

"We looked like a tired team tonight, I don't know why. I can't explain it, but we didn't have the jump and the zip that we usually have," said centre Daniel Brière.

The Habs mustered only five third period shots as the Rangers fore-checked hard and chipped pucks back into the Montreal end at every opportunity – on a power-play to start the period, Montreal saw three straight dump-ins retrieved by New York players and quickly thrown up the ice.

That's true, as it goes, but if such is the case it's a tacit admission that Rangers coach Alain Vigneault managed to get the tactical upper hand.

It helped his cause that when it counted most, Rangers goalie Henrik Lundqvist pitched a 1-0 shutout and was the very picture of the elite goaltender even though he was only called upon to make 18 saves.

With the game on the line, he stood tall – literally, he purposely headed a shot into the netting in the final minute with the Habs' net empty.

That didn't hold a candle to a highlight reel blocker save to deny Thomas Vanek in the second period.

"That was ridiculous. It changed the whole complexion of the game," said Rangers defenceman Marc Staal.

Asked whether it was a relief to dispose of the Habs at home rather than face the prospect of a Game 7 in a rocking Bell Centre (both Pacioretty and Brière expressed the conviction Montreal would have prevailed), Staal said "it's a sense of accomplishment. We get to enjoy it as a team. We get to enjoy it and move on."

The Rangers won this game and their ticket to their first Stanley Cup final since 1994 in the much the same way they won the series: by out-skating the Habs and pressuring their defencemen – in the third period, their forecheck was such that Montreal, with its season on the line, managed no shots in the first nine minutes of the frame.

The Rangers and Canadiens both talked about the capital importance of scoring the first goal at their pre-game workout (which made it like basically any other morning skate).

But from an identical starting point they employed different philosophies.

New York seemed bent on trying to score it, the Habs appeared content to focus on prevention.

The first scoring chance for the home side came in the second minute after Montreal's Brendan Gallagher made an uncharacteristic turnover along the right-wing boards.

The Rangers set sail in the other direction on a three-on-one, but Mats Zuccarello couldn't stuff the puck past Tokarski, who slid to his right to thwart the chance.

It wouldn't be the only one to fall to the Rangers, a few minutes later Chris Kreider's deflection from the top of the crease somehow was blocked by Tokarski, who also denied Raphael Diaz on power-play point shot.

The hockey cliché holds that you need to weather the first 10 minutes of the period on the road, and the Habs did that, more or less.

Their first shot, an anemic and inoffensive wrister from Pacioretty on the left wing side, came just before the eight minute mark.

And after surviving the initial push, Montreal was able to go to work and creates some chances of their own, the best of which came to Alex Galchenyuk, Montreal's man of the moment.

Lundqvist didn't appear to see his quick backhand from the slot, it hit him anyway.

At the close of the period Montreal earned a power-play of its own, but the best chance was created by New York's Rick Nash, who smartly went around Subban and Tokarski, and was an inch or so away from tucking it in the far side of the net.

The frame ended scoreless, which was good news for only one of the teams: Montreal.

In the second, the Rangers nearly opened the scoring with Subban in the penalty box, but Derek Stepan's shot bounced off the post after striking Tokarski's left pad.

But the second period wasn't quite the one-way traffic festival that the first was.

The Habs had a couple of decent chances, including a slick Vanek dangle.

The Austrian has been largely anonymous in this series, but when Therrien paired him with Lars Eller and Rene Bourque, the Habs began asserting themselves offensively.

With just under five minutes to play in the period, Vanek pounced on a turnover and bustled his way to the net, sending a fluttering backhand that Lundqvist kept out with a windmilling blocker save – if you didn't see it, don't worry, it's coming to a highlight reel near you.

In a game that was developing into a test of wills, the Rangers finally imposed theirs.

The New York fourth line hemmed its Montreal counterparts into their own end for the better part of 40 seconds, defenceman Andrei Markov lost a puck battle, and former Montreal draft choice Ryan McDonagh sent a pass behind the net.

It was collected by Brian Boyle, who shovelled it into the slot for Moore – an alum of the 2010 Canadiens team – to snipe it past Tokarski.

The assist was McDonagh's 10th point of the series; the argument in favour of dubbing the great McDonagh/Scott Gomez swap of 2009 the worst trade in Habs history is picking up steam.

So there's at least one question that's closer to being settled. 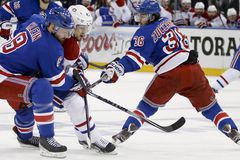 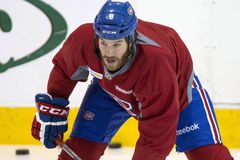 Alex Galchenyuk blooms into break-out star of NHL playoffs
May 28, 2014 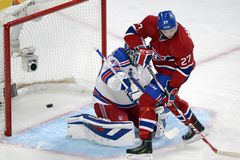 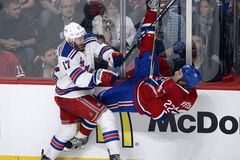 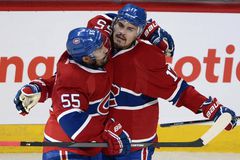 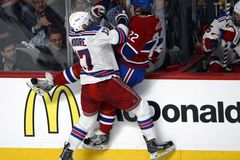 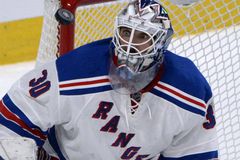