In an elevator following his club's 2-1 loss to the Montreal Canadiens, Ottawa Senators GM Bryan Murray offered some candid thoughts on the job done by the zebras.

His language was colourful enough not to be printable in a family newspaper, and if the league were to read his words, he would doubtless be a little lighter in the wallet for ripping the officials.

That doesn't mean he doesn't have a point.

The Senators had a goal mysteriously chalked off early in the third period because of a goalie interference call on Ottawa rookie Jacob Silfverberg.

The problem is Silfverberg barely touched Montreal netminder Carey Price, who was outside his crease, and if he did it was after André Benoit's shot was already past him.

"I don't think anybody expected that at all," said Ottawa captain Daniel Alfredsson.

Said Price after picking up his sixth straight win: "I don't ever comment on the refs."

He said it with the faintest shadow of a smile.

The game was 2-1 at that point, and while the Habs can reasonably argue they carried the play and had several chances to extend their lead, the Senators would argue it's impossible to think the call didn't have an effect.

Which is fine, everybody makes mistakes, and NHL players are always loath to criticize refs, who have a devilishly difficult job in trying to police the world's fastest professional sport.

But at some point it becomes an issue.

"Personally, I don't like calls like that," Montreal foward Max Pacioretty said of the Silfverberg decision. "It's tough for a player like me because I'm always going to the net, it kind of gets me second-guessing myself sometimes when I go to the net. It's tough, it's a tough break for them."

Sunday's game may well be a microcosm of why some players are feeling confused.

Just 24 seconds into the first, Habs centre Tomas Plekanec was whistled for a goaltender interference call after he nudged the Sens' Craig Anderson – he'd been guided there by Ottawa centre Kyle Turris.

Perhaps that's a bad example because Plekanec should know to avoid the goaltender, having been whistled down for unsportsmanlike conduct earlier in the year after spraying one with snow.

Silfverberg scored his second of the year on the ensuing power play when Patrick Wierchioch's delicious pass sprung him on a breakaway.

It was Pacioretty's first shift since he underwent an appendectomy – the procedure kept him out of the lineup all of seven days.

Then, at the 4:37 mark, came another iffy call as Habs defenceman Josh Gorges skated back with Ottawa's Colin Greening to challenge for a puck that had been iced by the Senators.

Gorges bumped Greening into the boards with an innocuous shoulder check – it was penalized as boarding.

"They're cracking down in those situations, I guess," said Gorges.

There were other calls: a high-sticking penalty on Erik Karlsson that made no contact with the putative victim, Tomas Plekanec. A diving call on Montreal defenceman Francis Bouillon, who got twisted up in Erik Condra's stick (Condra got a tripping penalty). The hooking penalty on Turris, where his crime was to lift an opponent's stick.

And those are just the ones from Sunday's game.

It's not remotely fair to single out veteran refs Brian Pochmara and Greg Kimmerly, who presided at the Bell Centre.

The fact is officiating has become a talking point around the league in the early part of the season – the parade to the penalty box is an inexorable fact of post-lockout hockey as the officials work to crack down and players adjust to the new way of doing things.

On Saturday, Boston's Tyler Seguin was screaming abuse at the refs after being penalized for slashing in the late-going of a game with the Maple Leafs – replays suggested it was the incorrect call, there were two goals called off for incidental contact in that game as well, one on each side.

As one player put it privately: "They just haven't been very good this year."

Part of it has to do with a crackdown on several types of infractions – goalie interference, obstruction on rushing forwards, hands on the puck in the defensive zone – and some of it doubtless has to do with ring rust.

In the event, Ottawa and Montreal combined to go 1-for-9 on the power-play.

The Habs' Erik Cole scored on a first-period backhander to give Montreal the lead. The goal came three seconds after a tripping penalty to Alfredsson.

Anderson's streak of yielding zero goals beyond the first was preserved, but unfortunately he was outdone on this day by Price, who saved 32 of 33 shots to move into a share of the league lead in goaltender wins.

Montreal has now won six out of seven games, Ottawa has lost two of three; they took the bus home feeling aggrieved, and not just over the officiating. Saving hockey players from themselves
February 1, 2013 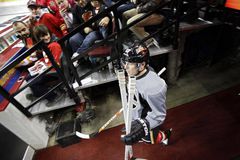